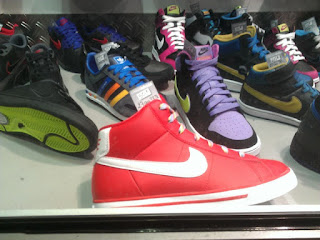 As any English-speaking foreigner here knows, some of the most embarrassing language issues center on faux amis (false friends), those expressions in one language that seem like similar ones in another, but in fact, mean something entirely different.  They are like tricks, familiar enough to trip up the reader, and the more I try to learn French, the more it seems I stumble upon them.  For example, one of my friends (a real and true human one) was telling me a few weeks ago that she was going to Marseille to buying some baskets for her daughter for Christmas because she couldn't find the right ones in the right size in Aix.  I wondered just what kind of sweet little baskets she was looking for.  Well, it wasn't the wicker kind at all, but the kind pictured here, because baskets are not baskets in French, but high top sneakers.  (A basket is a panier or corbeille in French.)  Similarly, when we first arrived in Aix, I was asked by someone if my twins were vrai ou faux (true or false).  I managed to keep my indignation to myself when I realized that in fact, those two boys whom I carried for nearly 9 months and birthed as twins are not vrai jumeaux (true, or identical twins) in French, but faux (fraternal, or false) ones, however false it feels to call them that.  Much of French usage is context-based, and there are many of these faux 'faux amis' where a single word can actually mean two different things, depending on the context.  It's like this flocked-to-the-extreme red Christmas tree which I discovered this week on the street in Aix; it looks faux, but in fact is real! 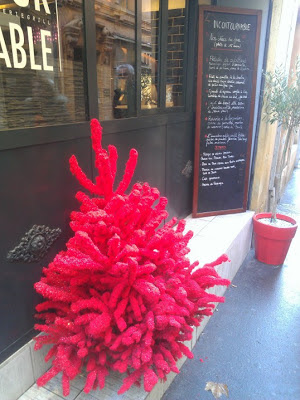 Other language deceptions exist in the realm of pronunciation where there are an awful lot of superfluous letters in French which are not supposed to be pronounced, sometimes.  Those are false friends too in my view.  Young French kids learn French pronunciations and silent letters through memorization, aided by schoolbooks that cross out the silent letters.  I think that would be very helpful for adult learners.  For example, faux amis (silent 's', but do pronounce the 'x' as it carries over to the vowel in the next word: foe za mee) but vrai ou faux  (don't pronounce the x here, vray oo foe), and in those doubly fake friends, faux faux amis (the first x is silent, the second one is not, foe foe za mee).  See what I mean?

In fact, every language plays games with new language learners.  My first language, Finnish, offers nice pronunciation rules, in that every letter in a word is pronounced, so that sounding out words is relatively easy.  But learning what those words mean, and how to use them becomes very difficult when one realizes that long compound words are very common, and that there are over a dozen cases that must be learned; a word like vesi (water) becomes a very different word depending on whether you want to drink it, go in to it, moisten something with it, or are admiring it.  Dangerous deceptions lurk here too; years ago, when I was learning basic Estonian which is closely related to Finnish, I discovered plenty of faux amis, where a word in Finnish like halpa (inexpensive), used perhaps by Finnish tourists when marveling over cheap prices in Estonia, sounds very bad to Estonians because to them halb means bad, or poor quality.  Of course, English is difficult too, with the many homonyms (their, there, they're) and silent letters and difficult sounds: ch, sh, th.

The only consolation is that eventually after enough encounters with different kinds of faux amis, one learns from one's mistakes.  It's rare to meet a faux ami a second time.  Instead, over time, one is able to turn these false friendships into true ones where the once-tricky words or pronunciations actually become useful communication tools, for exchanging niceties, or asking questions, or even sharing confidences, say with neighbors, teachers, or friends.  At those times, the language used may still not come out correctly (it rarely does for me!), but at least there is enough there to create a true and real social connection.
Posted by Anne Tuominen on Tuesday, December 18, 2012