As human society moves relentlessly forward, things that some of us experienced as luxuries have easily become normative expectations in contemporary society.  For example, my spouse and children were aghast to discover that our rental house (in which we have been biding time as our own home becomes vacant) had a big, old, fat television with only a handful of channels.  Quelle horreur! (How awful!)  The situation had to be fixed immediately, so now our own flat screen television sits atop the antiquated monstrosity. (Or, which is the monstrosity?)

Having an up-to-date television is one thing, but probably the greater hardship for my family in our U.S. rental has been sharing a single bathroom with one toilet.  Our sweet little rental home was built in 1936 and for the time in which it was built, that indoor toilet was probably quite the luxury.  In some parts of the world, indoor toilets still are a luxury and the focus of philanthropic work (see Gates Foundation work on this: "What we do: Water Sanitation Hygiene strategy overview"). Today though indoor plumbing is ubiquitous in the West; the OECD indicates that 97.8% of OECD countries have at at least one indoor toilet (see OECD better life index.). We've gotten to the point where a single toilet has become the minimal standard in private homes.  Most everyone we know in Seattle has at least two bathrooms with a toilet each, and during our sojourn in France, we lived in two different apartments with two toilets in one and four(!) in the other, arranged variously as full bathrooms or water closets (or wc's), with just toilets and sinks.  Occasionally, in France, we'd come across a bidet (not to be confused with a toilet), but these luxurious items seem to be much less common today.

Luxury in toiletry does seem to be reserved primarily for the private home.  Public toilets continue to be much more minimal, even in the West, although here there are variations.  In France, we attended quite a few all-day soccer tournaments with hundreds of attendees at public stadiums where that minimal standard of a single, barely clean toilet was considered sufficient to meet the needs of all the players and their families.  The conditions often required the provision of one's own toilet paper and the same kind of dexterity as the standing Turkish-style toilets at the French aires de repos (rest stops).  Talk about antiquated models! These toilets off the toll highways were really old school (or barbaric, according to one expat friend.)  In our beloved and bourgeois Aix-en-Provence, public money was finally coughed up in our last year there for the installation of several fancy public toilettes (these are always referred to in the plural in French, even when there is only one!).  I had to laugh at the installation of one which was right next to the location of a very popular children's bungee-jumping attraction, making it difficult for tourists to stand in line or to enter the 'facilities' without being jostled. 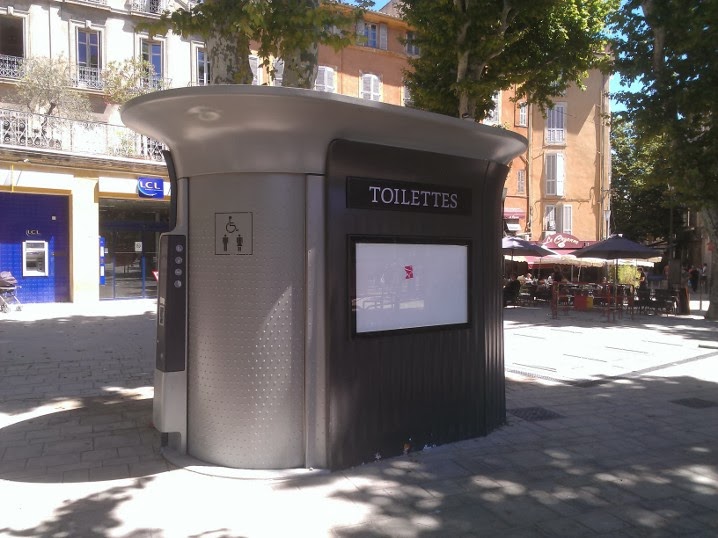 French tourist offices don't typically offer access to toilets (not in Aix, not in Nice, not in Lyon), but the staff do direct people to private toilet facilities where you can pee for a fee, but these facilities were often a bit scruffy too.  It seems that the French do not put a lot of money or effort into the provision of public facilities, while providing ample access seems to be much more important in the U.S., even if the toilets aren't always flushing models.  I'm thinking of the outhouse style port-a-potties such as the one I noticed two weekends ago, prominently stationed adjacent to a soccer field at my son's tournament in Beaverton, Oregon. Permanent facilities were also available at the sports complex, but since one particular field was a bit farther away, someone had thoughtfully installed a temporary toilet.  I've even been to tournaments where a dozen such port-a-potties were set up, all in a row.  When you gotta go, that's nice to know. 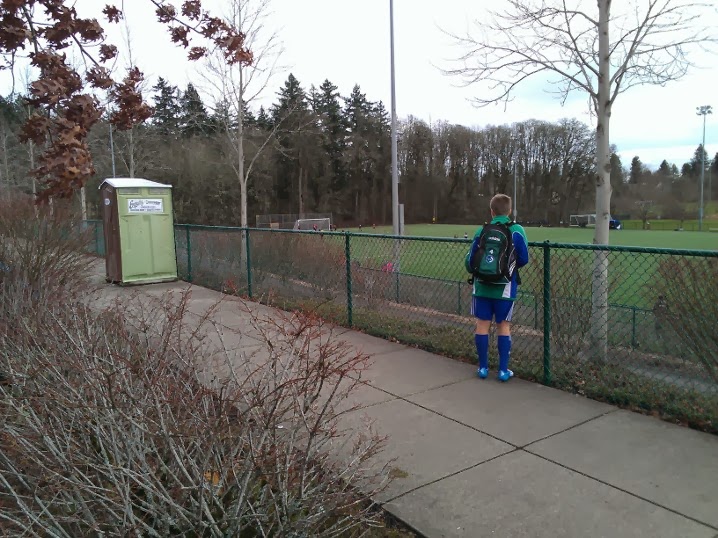 Posted by Anne Tuominen on Thursday, February 27, 2014 No comments:

A moment of loudness 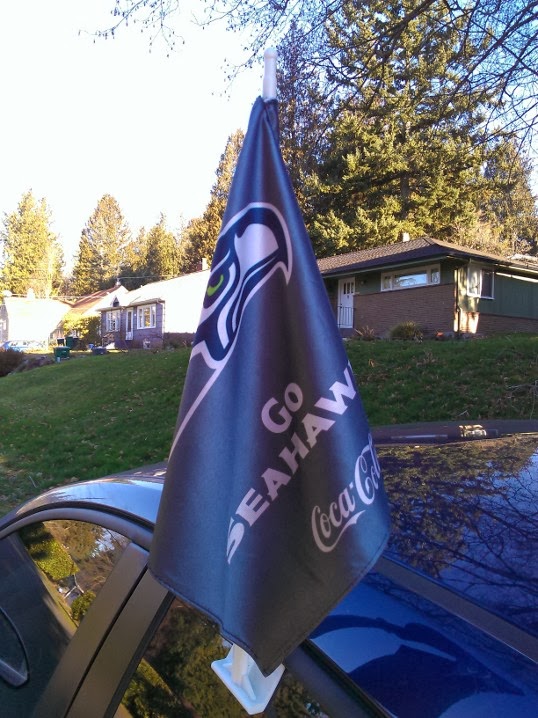 In a twist, today at 12:12 pm, the state of Washington will have observed a moment of loudness, in celebration of the Seattle Seahawks professional football team's recent Superbowl victory.  That shared moment will no doubt have been most deeply felt and expressed by the thousands of victory parade attendees in downtown Seattle, while other fans are decked out in fan gear as they go into school and work today.  (The superintendent of the Seattle public schools apparently misjudged the fervor of the fans in the city and had to back down from his initially firm statement that school absences to attend the parade would not be considered 'excused' by the school district. Local King5 news has reported on tv that over 500 of the 3000 district school teachers are absent today, and 13,000 students out of 50,000 are out.)  Markers of fandom are still visible in the aftermath of last Sunday's game, with ornaments and flags on homes, yards and cars all over Washington state (and apparently elsewhere, among non-Washingtonian fan club members, see "Vancouver Seahawks fans are Superbowl Ready," Jan. 31, 2014, CBC news).  The flags and jerseys depicting the #12 are especially popular (see flag in photo below).  It's not an idea original to Seattle apparently (see Ballard, Chris. "Into the belly of beast mode in Seattle's 12th man," Nov. 6, 2013, Sports Illustrated), but it has cleverly linked more fans to the team and created new merchandising opportunities.  As a single entity, the fans are depicted as the imaginary but instrumental 12th man on the 11-man team roster.  Those fans, the ones with tickets to home games anyway, have been credited with creating so much noise inside the stadium that they have helped derail opposing teams' efforts.  Presumably, other Seahawks fans wearing #12 jerseys while watching at home on tv contribute in spirit.

Such fandom represents the quest for social solidarity in modern society. It is similar to the religious fervor that ties people together and that fosters essential social cohesion of which sociologist Emile Durkheim spoke over a century ago. Social connectedness is what gives meaning to people in their lives as members of communities on multiple levels. Without it, societies would cease to exist. In the past, shared religious beliefs were the source of such ties in much of the West (and continues in some parts of the world), while nationalism, or national pride is a more modern source. In the current era, love of country is often supplanted by enthusiastic fandom focused on loyalty to sports teams and their wins and losses. Wars between countries fought on fields and trenches become socially constructed as war-like athletic skirmishes on artificial grass fields created by a "civilian leisure class", as Steve Almond notes in his riff about football and its real physical risks for players ("Is it immoral to watch the superbowl?" Jan. 24, 2014, The New York Times Magazine).  Some sporting events bring together national pride and sports fandom such as the Olympic games beginning today in Sochi, Russia.

The connections between war and sport, and religion and sport are nothing new.  Neither are the intense feelings and the potential fanaticism that these all may bring about, and that spell potential danger. (Fan is short for fanatic.)  When groups of fans recognize and bond tightly over shared identities or feelings and expressions, the implication that often follows is that if we are this, then THEY, those people and groups who are not us, are something else, not as good, not as smart, not as human perhaps. This us vs. them mentality is inescapable even when the distinctions are really quite weak.  Obviously there is nothing that inherently different from a Seahawks fan or a Denver Broncos fan, or a Olympique Marseille fan and a Paris Saint-Germain fan if we want to talk football as the rest of the world knows it. Yet, in my family's short experience as denizens of the south of France, we quickly learned that it was interdit (forbidden) to root for the Paris team, even when this team was playing a foreign team such as Barcelona's team!  (Read my take on French football rivalries here: Allez les gars! Nov 26, 2012)  In this case, team loyalties seemed to go much farther than nationalistic ties, and sometimes these have led to fights and vandalism between warring fans.  When local or national or religious or sports pride supersedes good judgment and mutual respect for fellow humans, that is when we get into trouble and undermine our humanity.  It is our shared and more fundamental identities as human beings and citizens of planet Earth that would seem to be more significant (at least until we discover other analogous life forms elsewhere).  Go world! 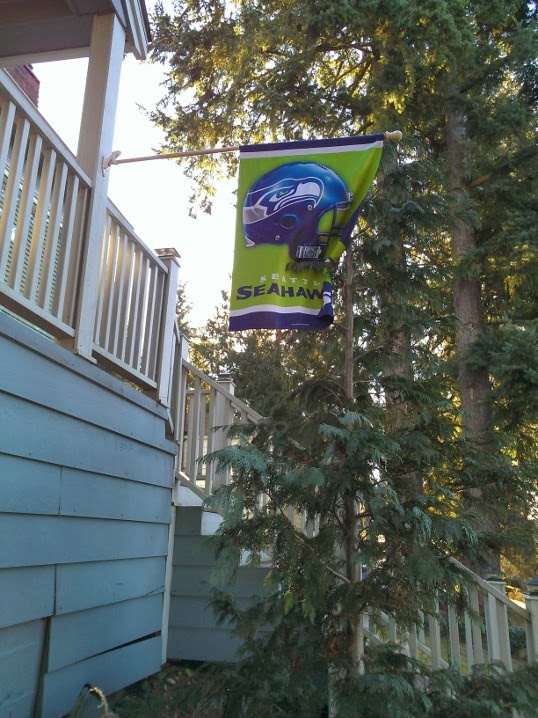 Posted by Anne Tuominen on Wednesday, February 05, 2014 No comments: