A few weeks ago, the NYTimes magazine focused an issue on walking around NYC (April 23, 2015). Contributors shared some favorite city walks, while other articles explored how NYC pedestrians and cars co-exist, and how much distance urban rats actually cover in their scurrying about the Big Apple.  A small collection of human New Yorkers were given fitness trackers to reflect the distance they cover on foot each day (see Sweeney, Camille. "City of 10,000 steps.").  Their short profiles in the paper edition of the magazine indicated how much of the walkers' daily walking distance was achieved often just by getting to and around work.  I found myself wistfully remembering my similarly pedestrian existence in Aix-en-Provence, France, where most of my errands were on foot, and even getting to the (single) family car required a walk down three flights of stairs and across a city block.  I didn't have to plan to walk, walking just happened.  Sometimes the walking was exhausting but overall walking everywhere enriched the social experience of getting to know a city and its people and customs (and it seemed to be good for my physical fitness too).

Back in the States, I am finding that more and more, I have to create reasons to walk and places to walk to because my daily life is so chair-bound as a professor or car-bound as my children's chauffeur.  The services that I need regularly are also no longer difficult to access without a car. I shop online, I renew licenses and turn in paperwork online.  A walk to the post office has become rare.  This hearkens back to the assertion made in a Slate magazine article several years ago, that walking has been engineered out of existence (see Vanderbilt, Tom. "The Crisis in American Walking, April 2012; I cited this in an earlier post on walking in France, A pied April 2012).  Indeed, without my standing date to walk for an hour with a friend several mornings a week, and occasional spontaneous walks, I am fairly inactive in comparison to my life in France or even to my life in Seattle a few years earlier when I walked my kids to elementary school every day.  In my current situation, I simply don't need to exert myself to accomplish daily life.  Unfortunately, this appears to be detrimental to my waistline (as others have also experienced).  Clever people at Northwest companies like Synapse, Nike, Microsoft must have seen this coming, because they have been hard at work at reconceptualizing walking, or re-engineering it, into a game-like activity, rather like a leisure sport. Now we can wear fitness trackers on our bodies--the currently popular ones are wrist bands--and try to meet daily goals (10,000 steps or about 4.5 miles is the goal on the Fitbit tracker, the one I took over from my spouse a few months ago).  Progress can be tracked by looking at the number of blinking lights on the wristband, or by checking the actual number of steps on a smartphone that is hooked up to the tracker by Bluetooth connection.  A strangely satisfying sustained vibration on the wristband indicates when the target has been met.  That alone is somehow motivating; NYC walker Chang who tried out the Fitbit for a week reported that she'd stand in her living room and do jumping jacks if she hadn't hit her 10,000 steps by the end of her day (see Sweeney above), and I've seen a funny picture on Facebook of my cousin's motivated wife going up and down the steps in her home one evening in an effort to meet her step goal.  My neighbor and I have been known to pop out together for a quick 350 step walk to meet our daily goals.  To appeal to Boy or Girl Scout types, some fitness trackers proffer digital badges and accolades when particular cumulative distances have been covered, while competitive types can share their distances on Facebook or become Fitbit friends, tracking and competing with each other via their smartphones. These same friends might even try to one-up each other by sporting the best Fitbit bling, or jewelry attached to the relatively ugly rubber wristbands. Designer Fitbit bling is available at Nordstrom, while less expensive alternatives can be found on Etsy: see mine below. 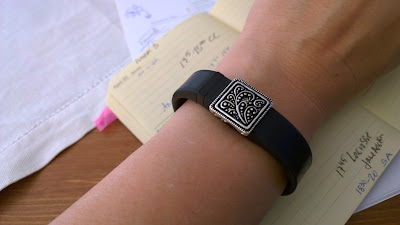 What makes this sociological?  For one, approaching the act of walking this way, as something that we do for fun (okay, maybe to achieve a relatively difficult to measure outcome--better health), and that is to be tracked, with the goal of the more, the better, is definitely a reflection of our time and of relative privilege.  It seems unlikely that our ancestors would understand why our fitness goals are to take as many steps as possible, when reducing the number of steps it would take to get somewhere or to accomplish some task has been a major goal for much of human history.  People in our society and outside it who are without access to good, reliable transportation, who must rely on a great deal of legwork each day, are also not likely to appreciate the attractions of counting daily steps for fitness. They may also not understand how fairly worthless markers like blinking lights and flashing digital badges are motivating.  They might better understand the motivation derived from competing with one's self or with other people, but even this motivation appears to be fairly flimsy, dependent on battery life. A friend and I have both admitted giving up on walking for the rest of the day on occasions when our fitness tracker batteries have run out!  We seem to have reached a point where we just don't see the point of continuing, if our steps aren't going to count towards our daily total.  I'm not sure what that says about me, but I'll ponder it as I work on my step totals over this long Memorial Day weekend, on a fresh battery charge.
Posted by Anne Tuominen on Friday, May 22, 2015