Despite my current obsession with the French driving rules that I must master in order to get a French driver's license, I do not regularly use the one car our family owns here.  (I tell why I need that license in an earlier post, April 2012 A is for Autoecole.)   Some know that in Seattle I was a keen urban walker, walking the mile to and from elementary school with my children nearly every single day, rain or shine, usually with my black and white floral Marimekko umbrella in hand.  (Even in physically-active Seattle, some thought we were remarkably dedicated.) My spouse and I selected our Seattle neighborhood in part because of its sidewalks and the walkable proximity of grocery stores, a post office, and a pub.  In true U.S. fashion though, I used my car for my main grocery shopping, the transporting of kids to after-school activities, and my commute to work. 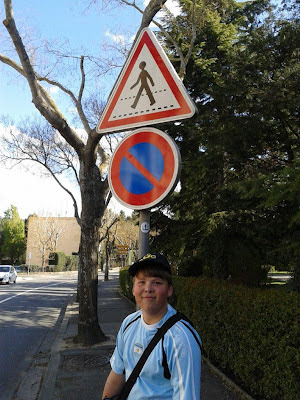 In contrast, in Aix, I take care of virtually everything à pied (on foot) or en ligne (online).  European cities are generally more walkable because of how these cities' cores developed over time, and perhaps also because of different social priorities.  I appreciate that I can faire mes courses (to run my errands) on foot relatively easily here (with a little help from delivery services and friends with cars), and I am of course grateful that I can do my professional work and occasional shopping at home in front of the computer screen.  Another factor in Aix that makes errands easy is that the weather is much more conducive to walking, so there is little need for parapluies (umbrellas), although a hat and a water bottle are often necessary during the hot summer months.  Yet, for many Aixois, driving to work and to run errands, rather than walking or trying other transportation alternatives, seems as common as it is in the U.S.  Many drive themselves to work, clogging the ring road out of Aix in the morning and into town in the evenings.  As for errands, we don't have Costco, here, but the parking lots at the supermarchés (supermarkets) and warehouse stores outside of the urban center are always quite busy.  On my big walking days when I cross town and walk a bit over 4 km, trying to catch the end of one boy's sports practice at a stadium near the center, and then hoofing it south across the autoroute (freeway) to the end of the other boy's sports practice, I am in the minority as a walker.  Just a few parents may walk to the stadium (I've gotten my share of strange looks and questions even here), and I am the only parent that retrieves her son at the other sports field on foot (we walk back across the autoroute to catch a bus home).  Walking beyond the general urban core, I am quite alone on the trottoirs (sidewalks) and passages du piétons (pedestrian crosswalks), except for the many, many voitures, camionnettes, motocyclettes, cyclomoteurs, and cars zipping by (cars, vans, motorcycles, mopeds and buses).  Even the relatively few urban bicycle riders (in contrast to those in training or exercising) seem to stick pretty close to the urban core.

In the U.S. but also here, walking has largely been "engineered out of existence," as aptly noted by Tom Vanderbilt in a recent Slate Magazine article (The Crisis in American Walking, April 10, 2012).  We have created other means to get where we need to go and we use them when we can, because they require less physical effort, or they feel faster, easier and more convenient.  Some confer more social status than others too.  Like a flashback to my own childhood, nothing elicits groans more than my suggestion of a family walk on a quiet provençal Sunday afternoon; after all, why WALK when we can drive, and what if someone sees us?  Furthermore, the bus-riding son tells me that riding the bus just isn't that cool, even in Aix.  It may be that Aix doesn't have enough well-developed, attractive alternatives to cars because there aren't enough people here to popularize them.  Paris, on the other hand, is full of stylish walkers, and then there are those incredibly hip business men and women on rented vélos (bicycles), while in the center of Lyon a few weeks ago, I couldn't help gawking at the half dozen grown women zipping around elegantly on foot scooters.

As a consequence of the continued love affair or dependence on the car, traffic in Aix is significant in and around town, as are the struggles and creativity to find places to park.  These issues are typical in many old European cities, where labyrinthine, dense urban centers have tried to accommodate motorized vehicles.  In the larger cities like London and Paris, restrictions against cars in certain zones are becoming more common, to ease congestion, pollution and the wear-and-tear of historic centers.  For us here in the south, the increasing cost of gas (even diesel is at nearly 1,50 euros/liter, that's about $7.87/gallon, The Connexion, April 17, 2012), the difficulties with navigating narrow 300+ year old streets (in our case, resulting in a nice dent and missing door handle and a costly repair), and the limited traffic and parking options (to run some simple errands last week, I spent three hours, mostly circling, to find short-term parking, to drop off groceries, and to get back to our 110 euro/month parking garage), being a piéton (pedestrian) may not be hip, but it is definitely smart.  Sometimes it's even really fun, such as when pedestrians take over the main thoroughfares, as they did on Cours Mirabeau last weekend after a very joyful carnaval parade covered the street with lots and lots of paper confetti. 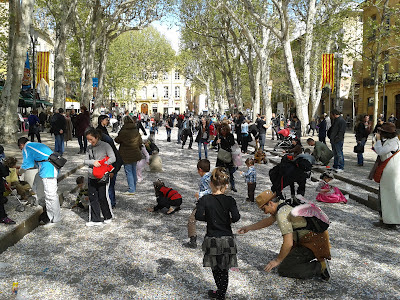 I've realized I'm walking less these days. Partly it is that I'm driving Margaret to the homeschool resource center for classes, and besides the fact that it is a definite drive (at the old North Enrollment Center on 90th), I'm just much busier what with so-called "home" schooling as well. I'm OUT of the neighborhood more often now, plus the big kids don't need walked anywhere - they do it themselves. And then there is baseball - which with a catcher, requires too much gear for biking OR walking, and we no longer play on the (horrid) Decatur field!