Immersion is the best way to learn a language well, and a recent New York Times article reports on a study that shows that the brain patterns of language learners in an immersion course actually begin to mirror those of native speakers (How Immersion Helps to Learn a Language, by Sindya N. Bhanoo, April 2, 2012, The New York Times).  One can imagine that the nuances of language and meaning are perhaps more easily recognized when one experiences these in real language settings, such as our boys are in the classrooms and hallways at French public school.  Learning the subtleties of French words and phrases is  something my spouse and I are facing ourselves, as we embark on our own quasi-immersion educational experience, through French autoecole (driving school).  Because auto insurance for foreign licensed drivers in France ends after one year, we must get les permis de conduire français (French driver's licenses).  (Some U.S. states have agreements with France to exchange licenses across the board, but not Washington state.)  As new driving school students, we have been immersed in driving terms and scenarios as we read and learn about when we may depassér (to pass), rabattre (to reinsert into a lane), ralentir (to slow down), arrêter (to stop), and cedez le passage (yield).  We are also learning some other subtle nuances, in French language and culture, from this driving school experience:

1-Getting a French driver's license is expensive: 780 euros per person.  This is our school's adjusted plan (as holders of foreign licenses so we probably won't need as many practical driving lessons because we actually know how to drive...).  That's nearly 1000$.  Getting a driver's license is truly a privilege here, not a right.  And it's no wonder  there are almost as many autoecoles in Aix as coiffures (hair salons); they represent a money-making opportunity.  There are literally 5 such schools within very short walking distance of our apartment, and they are little more than storefronts with very simple furnishings. 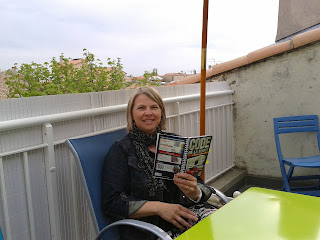 2-Passing the French theoretical driving test is challenging and requires understanding many nuances of meaning and context.  We have to memorize Code de la Route, (the rules of the road): 224 pages of panneaux (road signs), interdictions (prohibitions), obligations (obligations), sanctions and countless details about how and where to park, how much gas we save by driving 120 km/h instead of 130 km/h (answer: up to one liter!), and where we are supposed to store the gilet (reflective safety vest) that every car must have in the event of a car breakdown (answer: in the glove compartment).  The 40 theoretical questions are based on videos of driving scenes, and there is a time limit for each question, the questions may have more than one answer, and the situations and questions are often tricky.  For example, what does the white/red sign with 90 on it means?  That I must not exceed 90 km/h, but there might be three answers because I can drive 70 km/h, 80 km/h AND 90 km/h under such a posted limit.  What does it mean if that sign is posted in a foggy scene? My answer is that I must not exceed 50 km/h, the rule for driving in foggy conditions, regardless of the posted speed (and I could drive 30 km/h or 40 km/h if those are choices also).  If the sign is blue? I should drive at least the stated speed, because a blue sign is a sign of obligation, not one of prohibition.  To pass the exam, we must score above 35.  We are NOT there yet.  We met one Franco-American student with an expired U.S. driver's licenses who told us he spent 5 weeks, up to 6 hours a day, practicing for the written exam.  For us, the language barrier is one reason for the difficulty, the nuances are another, and....see point 3 for yet another.


3-Passing both the theoretical and practical driving exams means ignoring or forgetting everything related to actual French driving.  One must not rely on one's experiences or observations, or even the suggestions of any French driver.  Because parking on the sidewalk, honking the car horn in an urban area, crossing a solid white line to stop or park, using rear fog lights in the rain, and ignoring a vehicle with flashing blue lights, are all actually NOT permitted, even though they are completely regular, common, every day automotive practices in France.  I had barely pulled out of our parking garage on Sunday determined to 'practice' driving by following the French rulebook, such as carefully using my turn signals and slowing down as appropriate, when in the space of just a few blocks, a driver pulled out behind me and drove down the one way street in the opposite direction, another one blatantly ignored a yield sign, while a third one used the incorrect lane to enter the roundabout and then cut in sharply in order to exit straight ahead.  And all around me were illegally parked cars.  The message we are getting, and which most French probably already realize is, "Do as I say [in the Code de la route], not as I do [in real French traffic]."

The rewards for completing this remarkable educational journey?  We'll be legal drivers, our licenses will last virtually forever, and we'll qualify again for auto insurance.  We will also get the dubious reward of an actual red, solid A.  Many who know me know that I've always worked really hard for solid A's.  This time the A we're working towards stands for probatoire (licensed driver on probation), and probatoires display red and white A decals on their cars and drive at reduced speeds (110 km/h instead of 130 km/h, and 80 km/h instead of 90 km/h) for three entire years before they can be considered regular drivers (and attain their full number of driving points; this is another subject for another post).  My spouse is particularly incensed by this A reward, given our nearly three decades of licensed driving in the U.S. and his impatience with slow driving.  I am just giggling over the absurdity of it all, while trying simultaneously to appreciate the linguistic benefits of being immersed in the rules about French stationnement (parking), the safety features of les tunnels (tunnels) and the ways in which des pneumatiques sous-gonflés (underinflated tires) add to my fuel consumption.

(Image from http://gestion.v2.permisapoints.fr/templates/frontoffice/infractions/images/infractions/permis-probatoire.jpg)
Posted by Anne Tuominen on Tuesday, April 03, 2012

I find it very interesting to read about your adventures in France and I will continue to follow you and your family via your blog!
Have a wonderful spring!
Monica in Sweden