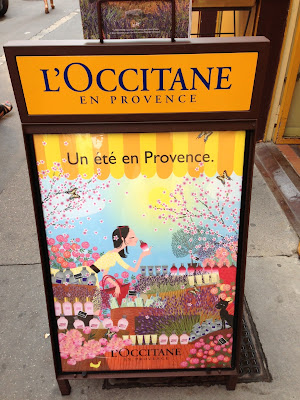 One summer in Provence is often like any other; they seem to have a timeless quality about them.  The many old rituals that mark the beginning of summer here are one contributor to that sense, as I recounted a bit breathlessly last summer. (See L'estival, June 2012).  This year, the images presented in artistic and literary works, especially those by Provençal natives, have revealed other ways in which Provençal summers have eternal qualities.  For example, at the major two-part art exhibition in Aix and Marseille right now called Le Grand Atelier Du Midi, I saw scenes and portrayals of Provence by the painter Paul Cézanne, and others, that were astonishingly similar to sights we can see today even though they were painted up to 100 years ago--the gorgeous seashores and ports at Marseille or Cassis or Nice, and the hilly and mountainous landscapes of scrubby pines, olive groves, red soil near Aix and in the Luberon, the baigneurs (bathers), the agricultural workers, the people reposing on verandas or near open windows.  The artists who make up what is being called 'the studio of the south' all saw, despite their different styles and portrayals, the same amazing azure color of the Mediterranean sea, and the light, that famous Provençal light, that we ourselves can see here every day in 2013.  (See my earlier post about this exhibition, Les oeuvres d'art, June 2013.)

The timelessness of Provençal summers is also echoed in literature.  I've recently completed two parts of playwright Marcel Pagnol's memoirs in which he describes summer holidays in le midi (the south) starting in 1903 when he was the same age as my boys, about to enter quatrième (4th grade, or U.S. 8th grade). In La gloire de mon père we learn about the magical first summer at la Bastide Neuve  near La Treille with his aunt's family, and the epic opening day of hunting season which brought unexpected glory to his teacher-father and a new friendship to Pagnol himself.  The second book, Le chateau de ma mère describes how Pagnol's family managed to continue their visits to the beloved Provençal summer place during the school year despite the difficult and long distance from their home. (Both books have been translated into English: My father's glory, My mother's castle.)  The ways in which Pagnol described the landscape, the daily routines, the summer foods, even the melancholia associated with the end of summer holidays, continue to be evocative of Provençal summers today.  Not a day has gone by this month that we haven't heard descendants of the cicadas that Pagnol described, and the heat in August continues to bake the ground as it has each late summer since time immemorial.  Likewise, 21st century late summer days seem to be as languid as those experienced by Pagnol's family, with slow, lazy afternoons, drinks enjoyed outside, and the late and leisurely market-fresh dinners.  Even that first bit of sadness marking the end of the holidays has begun for us as it did for young Marcel many summers ago.  Some of the details differ, as Pagnol was describing a time when transportation and electricity were still fairly primitive and not widely accessible.  Our end-of-summer melancholia is reflected by the need to turn on electric lights as darkness cuts our dinners on the terrace a bit shorter each night, and by the filling up again of the empty parking spots on our street as locals return from their own holidays.  However, just as Provençal summers have always been marked with a sudden influx of fêtes, special market days, and boules tournaments that then gradually lead to slower, more relaxing days in the sun and shade, the end of summer, or any season really, is also both sudden and gradual, but in reverse. This is as true today as it was in Pagnol's and Cézanne's Provence, and one could even say it is true anywhere.  Gradually, we make small daily adjustments to our daily routines to accommodate shorter summer days and windier or rainier weather and calendar dates that come closer and closer.  Sometimes we may even try to ignore the signs a little as Pagnol himself did.  But then, suddenly, we have to accept, just like every year, that another wonderful summer, in Provence, or elsewhere, has come and is almost gone.
Posted by Anne Tuominen on Saturday, August 24, 2013