Prior to the our first visit to France as a family, a Seattle mother recommended Musée de l'Armée in Paris as an engaging touristic sight for our then pre-teen sons.  We certainly don't glorify war games or weaponry in our family, but after umpteen churches and art museums, military museums offer another glimpse of a nation's history and cultural perspectives in ways that might capture the attention of adolescents.   The World War II images and Napoleon's giant tomb next door certainly stuck with our boys.  The following summer, we visited the battlefields of Normandie and the WWII museum in Caen, and the following spring, we went to see what was left of the World War I battlefields in the Verdun. (For a photo and brief mention of this trip, click here: Les communications internationales, May 2012 ).  We've also watched France's contemporary displays of military might as these are televised on le quatorze juillet (14th of July, a.k.a. Bastille Day).  This past Christmas in London, we made a stop to see England's Imperial War Museum before it closed for a remodel, and just two weeks ago, I took my sons to the Sotamuseo, Finland's military museum in Helsinki.  World War II was the main focus of the museum, and as I was simultaneously reading a novel about a nurse in the north of Finland just as the Germans began their retreat towards the end of World War II (Kätilö by Katja Kettu), I got a better understanding of the complicated warring that took place in Lapland at that time.

In part, our boys are interested in military displays as many children are, without perhaps understanding the true horrors of war.  We also have some family military history as many families do; my husband's grandfather crossed the Channel as an American soldier in the weeks following D-Day and his stories of his time on the Continent are still with us as are the medals and a few letters that he wrote during his tours.  My grandfather was a career officer in the Finnish army, and although he died before I was born, there are many pictures of him in his military uniforms and a few mementos as well.  Finally, there is that small matter of obligatory military training (Asevelvollisuus, or Intti in Finnish slang) in Finland that my bi-national sons may or may not have to fulfill after they turn 18 if they wish to retain their Finnish passports when they are 22 (the age at which they could lose their passports if they don't meet certain conditions).  These conditions, for Finns living abroad, seem to be in flux, but military training or civil service remains a requirement for young Finnish men, and is optional for women.  It has been shortened considerably since my father, uncles and even my male cousins took their training, from over a year to something like 6 months to a year, although the obligation to step up in times of war lasts throughout adulthood.  In any case, my boys know that military training is a real possibility for them, and at the Finnish war museum, we had the opportunity to see what kind of clothing and equipment are issued to recruits today and to try on both an army jacket from World War II and from the contemporary period.  A film showed us some of the activities of contemporary Finnish soldiers, particularly as members of U.N. peace-keeping forces.

As 13-year olds, my boys don't really know if and when they will participate, or if they will even want to; one boy expressed concerns about 'boot camp' (he's probably watched too many U.S. movies of screaming U.S. Army sergeants), while the other one pointed out that the training period would provide a good opportunity to learn Finnish well.  For my part, I am wary of the social control and structural conditions present within the military order, even though I recognize that the military is an essential social institution, one that ensures the protection of societies.  Furthermore, military training and/or service can offer young men and women tools with which to learn how to structure and prioritize one's time and can help build self-confidence and self-discipline. It is this last point that I was thinking of when I saw this funny Finnish military poster from the 1980's that promoted puhtaus ja terveys (hygiene and health).  The bubbles are titled (from top left and clockwise): Brush your teeth, Comb your hair, Keep your armpits clean (!), Remember genital hygiene (!), Wash your feet every day, Take a shower, Wash your hands, and Shave.  Those are the very things we are working on right now with our young teens, and if it will take a short Intti stint to cement those habits, I might be ready to send them next summer. 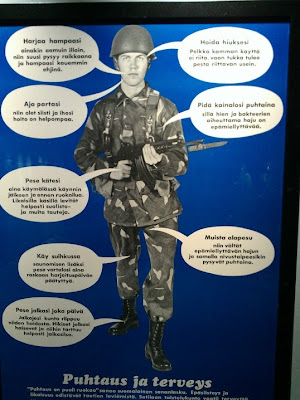 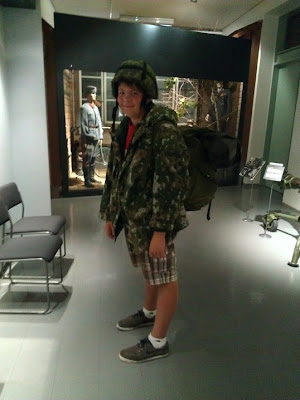