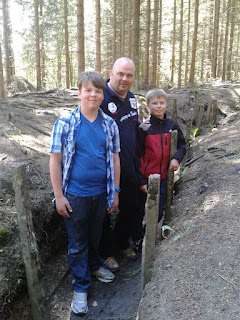 Our family has been on a little multilingual spring break road trip.  We started in Bourgogne (Burgundy) where we attended a rugby tournament and visited Dijon, and then continued to Verdun to see the increasingly faint remains of World War I trenches (as seen in photo) and villages détruits (destroyed villages).  We continued northward into Germany's Saarland, to Trier, to see a roman gate, a holy tunic and Karl Marx's home.  We made a tiny jaunt into Luxembourg to buy some cheap fuel for the car, crisscrossed back through France's Alsace-Lorraine to Germany's Schwarzwald (Black Forest) for some cake, and then returned to the south of France.

Before we left, we had numerous arrangements to make, with sports coaches, French teachers, and friends.  For many such communications, I use texting as it works well for me in terms of French language communications.  (And I think the French find it less painful to read poor French than to hear it spoken!)  I am able to express myself better in written French and I can read French, so textos (text messages) are an excellent way to communicate when I can't understand spoken French instructions or requests, or when I want to ask questions myself.  I've gotten us to sports tournaments and rendez-vous (meetings) and met up with new friends.  I'm even learning some French text language.  If "I don't know", then  je ne c pas works for je ne sais pas.  Text messaging is also very versatile for me when I am faced with multiple languages.  In the past few weeks, I've had textos simultaneously in one day, in French, from two sports coaches, a French mother, or my French teacher, in Finnish, from my new Finnish friend in Aix, and in English, from my kids, husband and a Canadian friend.  It is so marvelous to know that one can correspond and make plans relatively easily with people in multiple languages, all at the same time, with the use of texting.

To my utter dismay, my polyglot texting ability is not matched at present by verbal agility.  I was mostly completely tongue-tied on this vacation, speaking French to the German gasthaus proprietors, oui, oui, je prends un peu (yes, yes, I'll have a little) and German to the French waitstaffs, danke schön, (thank you very much), and resorting to English by default or Finnish in frustration.  Already, my boys have been cringing at my accent when I speak French, and while my German grammar is better than my spouse's, he is far more fluent in spoken German.  On this trip, none of this seemed to matter, as I truly could not verbally express myself clearly in either language.

Fortunately, written language and spoken language can also be combined with body language.  Even if the languages do not come out clearly all the time or the words aren't spelled correctly or in the right order, with gestures and hand signals, we can connect with others and communicate well enough.  Through a combination of these forms of language, we can chat with rugby team parents, find lovely German inns and a former French abbey converted into a hotel, and enjoy delicious local wines and fresh asperge or Spargel (asparagus), and glace or Eis (ice cream), depending on where we are.  On this trip, we were even able to get a car tire fixed in Germany after closing time on the evening before the holiday marking der erste Mai (May Day), thanks to the spouse's German language skills, my body language skills (imagine the pantomime: "Oh dear! What a big nail in the tire!"), and the international language of cold hard cash.

The result?  A very happy May Day spent in both Germany and France, and celebrated in (click here) traditional French fashion with a bouquet of muguet (lily-of-the-valley). 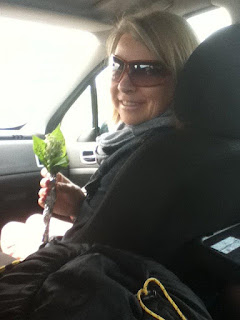