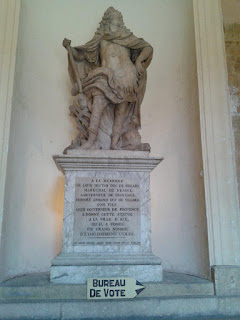 One of the guarantees of democracy is the right to convene freely.  During the past few U.S. presidential elections, we've convened with neighbors on election night, watching voting returns come in on the television and via the Internet while munching on snacks, and then celebrating or commiserating together as we listened to victory and concession speeches.  Last night, Allen and I had the good fortune to experience a very similar evening, but with French friends and much better food and wine, as we awaited the outcome of une élection présidentielle (a presidential election).  On t.v., we watched the final moments of the most recent French presidential election cycle culminate in a victory for François Hollande, and then listened to Sarkozy's concession speech, followed by the new president's victory speech as it was televised from a small town in central France.

Notably for a Socialist Party candidate, the new president was driven in a small car to his speech site.  While this choice of transportation will have to change as presidential security becomes important, it does mirror in some ways the simpler and more practical electoral process in France, as we've observed it: 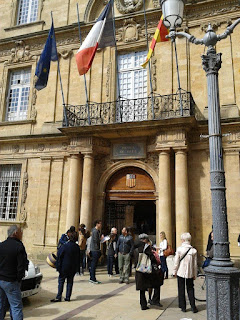 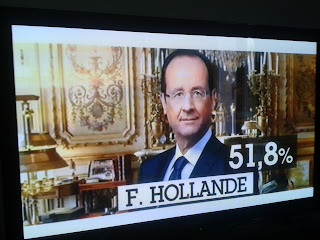 Because the outcome was closer than many sondages (polls) had predicted in the past weeks, there are many happy and many dissatisfied voters around France today.  In 'bourgeoise' Aix-en-Provence, (and in other nearby towns except for Marseille and Avignon), more voters chose Sarkozy than the ultimate winner, and in the earlier round, a woman from a far Right party, Marine Le Pen, fared better here than in other parts of the country, but did not advance to the final round.  Some in France are worried that the new socialist president will exacerbate the economic problems within the EU, while others are relieved to have a leader whose platform is national unity and social inclusiveness.  I think that ultimately what the French want is what any democratic citizen wants, the protection of one's democratic rights and the rights that go with being a member of a particular society.  For the French that means that they expect Hollande to maintain a strong French presence in Europe and to protect long-valued democratic rights such as the right to convene and speak freely, among others.  There is also the matter of protecting those uniquely French privileges that include extensive holidays, such as the five such fériés (holidays) this month alone!  (May 1: Labor Day, May 8: WWII Victory Day, May 17: Ascension Day, May 27 and 28: Pentecost or Whit Sunday and Monday).  The second of these comes tomorrow just as Hollande himself needs a chance to catch his breath and to consider which national priorities will come first.  For the sake of national unity, I am quite sure that cutting holidays will not be among them.
Posted by Anne Tuominen on Monday, May 07, 2012

Very interesting overview of the process - I think they are very wise the control it carefully both in terms of time and finance. Love the photo!