Just like in the American town in which I grew up and in the U.S. city where I've lived most of my adult life, sports rivalries are big here in France, at all levels.  For us, they are especially pronounced since our children play in local sports clubs and we spend each weekend listening to fans of opposing teams rallying their team's members against the foes.  The French may be a little more restrained than the American fans, but we hear plenty of yelling and sideline coaching:  Allez les gars! (Let's go guys!)  Bien joué! (Good play, or well-played!)  Tirez (Shoot!)  As for rivalries, our rugby-playing son's team has a cross-town rival club, and much was made of a former teammate 'defection' this fall.  A more intense rivalry exists between Aix's best club de foot (soccer club) and the one in the adjacent town (to which my other son has in fact defected this year, see the team photo below that appeared in Friday's La Provence, Nov. 23, 2012). 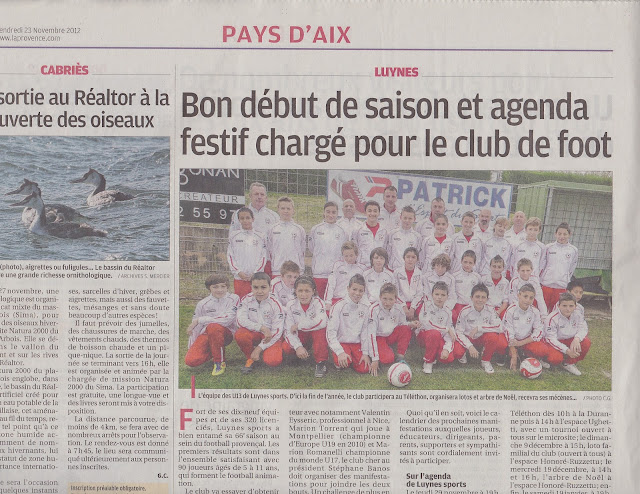 Intense local rivalries become regional ones and even national ones, such as those between teams and fans of the French professional teams, or between the French national team and say the Italians.  Here in Provence, regardless of one's local club affiliations, it's the professional football team OM, Olympique Marseille, that we are supposed to root for (this is apparently non-negotiable), and this Wednesday's French league match is a much-awaited one one of its big rivals, OL, Olympique Lyonnais.  As we see elsewhere, French fans can get a little crazy in expressing their loyalties and the rivalries.  A coach at our son's soccer club is such a rabid OM fan that he sports a big OM tattoo, a big old OM earring in one ear, and turquoise OM fanwear; he is also said to break out in song whenever the archrival team Paris SG loses its matches.  I'd wager though that when it comes to national team competitions, his local and regional rivalries are eclipsed by his support for the French national team, with its FFF rooster logo.

The us vs. them mentality is quite social.  On the one hand, it allows one to identify closely with others who share similar interests and situations. Rivalries and battles create that essential Durkheimian sense of belonging and group identity.  Interestingly, it doesn't even take a victory, to build that feeling of connection with others in the same boat.  Yesterday, our son's U-13 team tied the region's most prestigious and purportedly best team, (that would be the youth team from the OM club, mentioned above!).  Amazingly, that tie was the talk at our sons' school today, and it was the catalyst for some emotional Facebook posts on the club's page last night proclaiming a few grown men's pride in their hometown club.  Apparently, being the underdog can be just as unifying as being the ultimate victor.


On the other hand, being the underdog can pose real disadvantages too, because the relatively superficial sports rivalries usually reflect deeper inequalities and social struggles for power, privilege and prestige, between individuals, groups, towns, regions, etc.  These all have different social, economic and political endowments that others might seek or that they want to augment themselves, and so we jockey for power.  Sometimes we try to share, or compromise, but usually, the stronger, more endowed team wins, the other one loses, and if there is a tie, well, eventually that tie has to be broken, most of the time.  Here in France, we've just witnessed the messy political battle between the top candidates for the leadership of France's main opposition party (the former president Sarkozy's party) both of whom felt they had won the recent party election and neither would gracefully concede (see "Rivals class over UMP leadership ahead of talks" Nov. 25, 2012, France24).  I'm not sure who's the underdog in that rivalry, but ultimately that deadlock has to end if that party is going to remain viable.  Locally, we have the political wrangling for and against a national proposal to unify Aix more closely with Marseille in administrative affairs, to create a bigger metropolitan zone.  The mayor in Aix clearly opposes the plan, seeing it as a threat to Aix's prestige and its autonomy (see "Maryse Joissains ne veut pas de métropole, Sept. 7, 2012 France3).  She apparently authorized the banner that I saw being unfurled on the balcony at the hotel de ville (city hall) last Friday.  Others see the métropole plan as the only real way to improve the intolerable traffic in the region, the inefficiency of having so many separate administrative units in so many small towns, and the difficult security, economic and immigrant situations in Marseille.  (See a pro-metropole view here, in French.  I touched on Marseille's difficulties in an earlier post this year, see Du shit. )  In this case, the bigger, more complex, but overburdened Marseille is probably the underdog, despite the glory of its football club.  In sports, it often doesn't REALLY matter how the matches end (or so we tell the kids: "it's just a game").  Here though we can see that the outcomes of some rivalries can have much more serious consequences; sometimes it really does matter who wins and who loses. 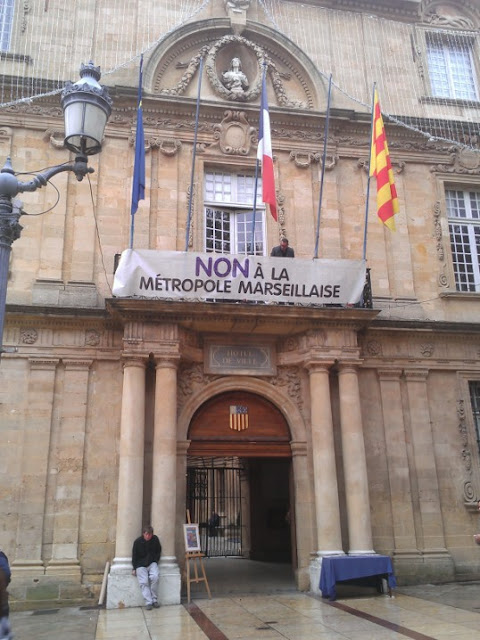 Great photo! The Aix/Marseille rivalry has been going on, literally, from Roman times so I don't see much hope for administrative harmony....