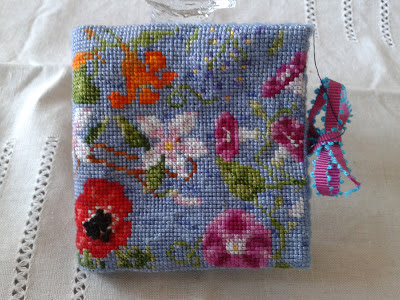 While I am a somewhat lapsed knitter (but one who now lives a simpler, French life with more time for little pleasures like needlecrafts), I was initially puzzled by the dearth of handicraft shops in Aix.  Within our first month here, a friend introduced me to a lovely but pricey shop called Au bonheur de dames (ladies' true happiness), where I have spent plenty of  Euros on yarn for the same flouncy scarves I've seen on many women here (see me wearing one creation on Le temps, Nov. 30, 2011) and on some beautiful but expensive needlework kits (my photo shows a little needle case that I completed earlier this year).  Yet, when I went looking for more shopping options, I was surprised by how few there were and how limited. 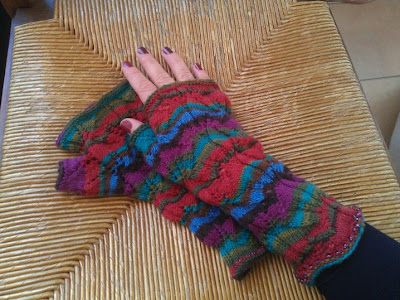 It didn't take long for me to realize why Aix has so few textile crafts shops.  On EACH occasion that I have brought out my knitting or other needlework in public or among French friends, I have been teased for being an old woman knitting on the football or rugby sideline or in the living room armchair.  Le tricot, la broderie, la couture, ils ne sont pas à la mode!  (Knitting, embroidery, sewing, they are not 'in'!)   This is in direct contrast to my experience in the United States where knitting and other crafts continue to be very popular.  Yet, the young sisters of the French soccer players have been absolutely mesmerized by my projects, asking me questions about the embroidery tension rings and needles, admiring the changing colors on the variegated yarn on my fingerless glove project shown here, and checking on my crafting progress throughout the games.  Surely these pleasures are not reserved for just les vieilles dames (the old ladies)?

I've come to think that young girls in this society, and particularly in the south have limited leisure time opportunities, with Barbies, then shopping and cosmetics, and then experimenting with cigarettes among them.  Clearly, textile handcrafts are largely out, yet other options like physical activities continue to be fairly segregated by gender.  Girls swim, do gymnastics or dance, play tennis, or might ride horses if they have the money.  There are a few exceptions, and perhaps my eagle-eyed readers discovered two of them in my last post (the one with the masculine title Allez les gars, Nov. 26, 2012): in the accompanying photo of my son's football team, there are two girls who play soccer alongside the boys.  They have to, if they want to play soccer here.  While France has a national women's team, the infrastructure for a girls' youth league is not as well-developed as it is in the United States where young girls have many opportunities to play, and so they do.  I have yet to see an all-girls soccer team or league here in the football-crazy south, and it's probably right to say that France does not yet have a functioning equivalent of Title IX (the U.S. law that ensures equal funding for women's athletic and other programs in federally supported institutions).  That means that French girls have to be incredibly determined, tough, and focused, if they want to play le foot, just like the two girls at my son's club as well as the courageous girl I saw yesterday, at a match in Marseille.  She waited stoically with her parents for warm-ups to begin, standing just beyond her all-boy team that was horsing around (and excluding her).  I watched her maintain her poker-face and her rigid posture as she stepped onto the field at the start of both halves.  Clearly, le foot means a lot to her, yet she cannot comfortably express the joy and pleasure she has for the game while playing among and against adolescent boys.  (Blog update: I have discovered a New York Times essay about this same topic, Sciolino, Sept. 16, 2002. "Paris Journal; For French Girls, Soccer is a tough goal", suggesting that not much has changed in a decade.) 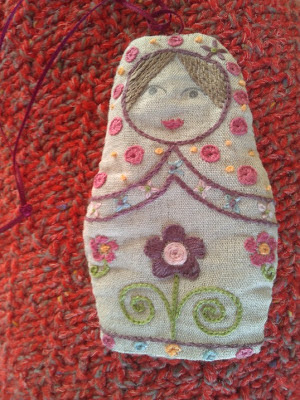 How do we find notre bonheur (that which makes us happy)?  As I continue to observe the gender inequality around me and look for evolutions towards a literally and figuratively more equalized playing field for French girls, (and wait for knitting to become hip among the younger French, male and female alike), I am hugely disappointed by France's former First Lady, Carla Bruni-Sarkozy's comments in a recent interview with the Parisian Vogue.  She says that women of her generation ....“don’t need to be a feminist....There were pioneers who opened the breach....I’m not at all an active feminist. On the contrary I’m bourgeois, I love family life, I love doing the same thing every day.” (as transcribed in "Carla supports gay marriage." La Connexion, Nov. 26, 2012) Apparently, this privileged and 'bourgeois' mother (whose voice could make a difference) seems to believe that her young daughter and other French girls will have no problem at all in finding equal and full access to life's pleasures and opportunities.
Posted by Anne Tuominen on Monday, December 03, 2012

Very pretty needlepoint!! I love it!
I know what you mean about the young people not knowing how to knit, embroider. I sometimes bring my knitting on the train and some people look at me with surprise, sometimes even ask what I'm doing. Sad! When I was in school we had sewing class starting in middle school till graduation. As far as I know there is no such thing in schools in HK :(