A central principle of sociology is that the social environment has a great deal of influence on human behavior and social attitudes.  Who we are is in large part a factor of our social environment.  That said, the physical environment also affects human interactions and behaviors, even if this environment in and of itself is not a central sociological concern.  I myself have paid attention to and been affected by le temps (the weather)  for most of my life, perhaps because much of this life has been spent in the northwestern coastal state of Washington, in the U.S.  The western side of this state gets a good share of rain each year and is subject to unpredictable environmental conditions because of the proximity of the Pacific Ocean so I am accustomed to rain and variations in weather.  The ways in which Pacific Northwesterners dress, interact, spend their time, and talk, all are influenced by the weather.  My family continues to be obsessed with weather, and we often check the weather news from home.  This past weekend we saw what seems like perennial news footage from the Pacific Northwest of the U.S.: salmon swimming across the road after another series of heavy Thanksgiving weekend rainstorms.  (See http://shelton.komonews.com/news/pets/692468-we-have-salmon-over-road ). 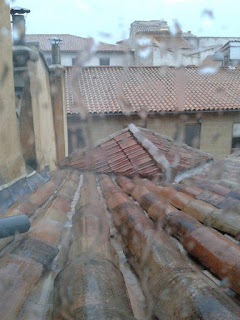 We had a little bit of weather excitement here in the South of France, a few weeks ago, in the form of a very wet tempête (storm) , which led to un vigilance orange (an orange alert, one away from the most severe alert) for the Provence-Alpes-Cote d'Azur région (province), as reported by Météo-France (the French national weather service).  Major roads and fields were flooded and the driving affected my parents' return to Aix from Mougins where they had been vacationing.  On that November weekend, the rainwater gushed out under the traditional roof tiles all over Aix, filling gutters and straining the capacity of city drains.  Sports events were cancelled even, something that rarely happens back in rainy western Washington.

We've also experienced a few small mistrals, the famous wind that screams southward down the Rhone River valley to the Mediterranean many times a year, and which cleans the air and brightens the light here.  The winds I experienced many weeks ago were cold and uncomfortable and people seemed to stay indoors.  Some mistrals can blow between 1 to 3 to 7 days, which has been known to make people mad here; now that is an extreme case of one's physical environment affecting human society! (But gray skies and constant rain can do this too.) 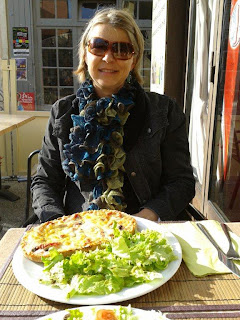 I'm still waiting for a proper 3- or 7-day mistral, or even one from the northeasterly direction that is supposedly very cold, to tell me that it is nearly winter.  The holiday display on the main boulevard in Aix, along Cours Mirabeau, is lit and the chalets de Noël (christmas market stalls) are in operation, but it feels so....warm, on this last week of November 2011.  Last Saturday afternoon, we watched most of our son's rugby tournament at Berre L'Etang (about 30 minutes west of Aix) without our coats on until the sun began going down, and the boys finished the games with faintly dirty knees but nothing like the mud they would have been caked in if this had been a rugby tournament back in Washington state.  I ate lunch, outside, with a friend in Arles yesterday, wearing my sunglasses because le soleil d'hiver (the winter sun), well, it's really bright.  The upside is that with such unvarying, dare I say, ennuyeux (boring) weather, there is a great deal of predictability in our activities and the brightness does keep one's spirits high in the shorter daylight hours of winter.  And, I shall appreciate the dry weather this week as our family lugs suitcases across the center of Aix to our new apartment.
Posted by Anne Tuominen on Tuesday, November 29, 2011