In an earlier post, I mentioned La Toussaint, the All Saints holiday that the French celebrate on Oct. 31 and Nov. 1, and which schoolchildren enjoy as part of a lengthier school vacation. In the days leading up to the two day holiday, the French converge on cemeteries to leave colorful pots of chrysanthemums and other fall flowers on family graves, and attend special church services honoring the dead, while others take short family vacations.  A week later, on November 11, France remembers military and national history by commemorating Armistice de la Première Guerre mondiale (Armistice Day), when the fighting ended along the Western Front in World War I (the U.S. equivalent celebration being Veterans Day).  As with most holidays, these two French autumn holidays are heavily rooted in family, tradition and history.

Coincidentally, history was written over our first La Toussaint weekend, in two different ways.  We marked a family historical event while on a vacation with the visiting grandparents along the Côte d'Azur (a.k.a. the French riviera).  We stayed in Mougins (pronounced moo-jans), a town 5 km inland from the coast, which has an old labyrinthine village perched high atop a steep hill, where the buildings are so close together in some places that you can nearly touch two buildings at once with both arms out.  The old village was a favorite haunt of Seattle friends who had lived nearby on an earlier expatriate assignment, and we had fun finding the places of historical significance to them, as we marked our own family's history there too, by celebrating my dad's 70th birthday. 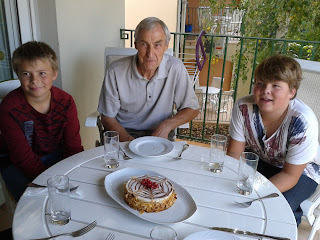 On the afternoon of his birthday, we enjoyed a lovely millefeuille on the terrace of our hotel unit.  (Millefeuille literally translates as a thousand leaves, and gastronomically, as many, many thin layers of pastry with custard sandwiched in between and an iced top and often topped with red currants; we call it a Napoleon in English.).  That evening we had a French dinner at a local bistro where my dad experienced another historical first; he was serenaded with a bon anniversaire à vous (happy birthday to you) sung in French by the chef and waitstaff! 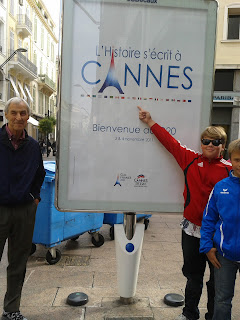 The other historical event was much bigger, or at least more globally significant, in that it involved the convergence of the top 20 world leaders in Cannes, which is adjacent to Mougins.  (Cannes is pronounced can, to distinguish it from a northern city Caen, which is pronounced caun.)  Cannes was one of our intended sightseeing stops, and we hadn't realized that political history was going to be written there over the next week (Jori shows us that the writing of history was indeed the theme of the world conference), but we knew something big was happening on our arrival because of the many motorcades of French police vehicles along the autoroute (highway), and the helicopters flying around the area all weekend.  On Monday, we took a bus into Cannes and saw the security preparations underway near the vieux port (old harbor) and at the casino/conventional hall. 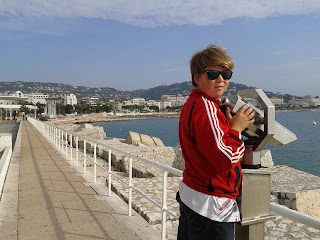 The city was beautiful, expensive, and glamorous, even in autumn, and the Mediterranean Sea really was blue along the coast.  Alas, we did not see any stars, Hollywood or political, or our fellow Washingtonian Bill Gates, who was a special guest of French President Sarkozy.  Most G20 delegates and guests arrived in Cannes after we had already left to return to Aix (and the movie stars had left by the end of summer), but Obama and other world leaders have appeared on French television for the past three days.  Whether or not they accomplished anything of historical significance at the meeting, we shall have to wait and see.  In the meantime,we have the French armistice day holiday ahead of us next week.