One of my favorite nonfiction writers is Peter Hessler, a journalist who has written evocatively and sociologically of his time in China, first as a teacher of English and then as Western journalist.  In his third book about China, Country Driving, Hessler shows us how the dramatic rise in automobile ownership in China has changed the way the Chinese move around their country and how their values are changing in regards to transportation and public safety.  Some of what he recounts is relatable to the earlier Western experiences with automobiles when these were new, but the other stories that Hessler shares suggest that there are aspects of driving in China that are uniquely Chinese.

Indeed, there do seem to be driving cultures in every society (and within the U.S., too, regionally, where Washingtonians have been known to complain about 'California drivers' with their impatient tailgating, and we can compare each state's expenditures on transportation by looking at  the conditions of the highways.)  In France we have also noted  how people drive, and how driving is regulated, channeled, and controlled here.

For example, French drivers seem to be fairly impatient and aggressive, yet creative, given their penchant for parking and stopping anywhere, even in the middle of a one-way single lane street.  There is a fair amount of horn-honking, and cutting in, rather than the defensive driving we are taught in traffic safety classes in the U.S.  Foreign cars seem to confer status here as they do in other societies; we noticed on our recent mushroom picking trip that ours was the only car in the caravan that was French, and we have seen more Ferraris and other luxury cars here than we ever saw in Seattle.  This is astonishing given that cars cost more here, and gas costs up to 4 times as much as in the U.S. 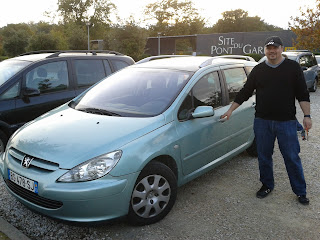 My spouse Allen has been driving here for 3 years, since August with our own used car which we bought at a good price from from a departing American expat family.  See Allen's hot wheels in the photo here.  The car is a Peugeot 307W, widely known as a family wagon, and seemingly available in only a pale green for the model year we have.  Allen likes its diesel engine, great fuel capacity, and its handling.  Hot it definitely is NOT!  And, like most cars here, it has a nice scrape on one side which we acquired in the tight underground parking garage near the prefecture in Marseille.

In most cities, there are central parking garages, underground, since on-street parking is at a premium.  We park our car in a central garage every day; there are about 5 such garages in Aix, the largest one with a capacity of nearly 1000.  With the narrow streets in Aix's old town, there just isn't much legal on-street parking available.  That said, public garage parking and the rarer private parking are quite expensive; a co-worker of Allen's has suggested that monthly parking in Aix is more expensive than in Paris (it ranges from 100-200 euros a month in Aix).

Driving itself involves following a series of rond-points (roundabouts) which are very common here at many carrefours (intersections).  They take some getting used to, as my dad and father-in-law discovered on their visits this fall, but the roundabouts do seem to work well, keeping traffic flowing.  The problem is that they don't always seem to be signed well, but should you miss your exit, you just keep driving around again.   In fact, the road signage in France is a bit inconsistent.  Many people here use navigational devices in their cars because the many small roads here are poorly marked and are hard to find on maps.  We use a program on Allen's phone.  Indeed, the rural roads and highways are virtually undistinguishable, as one may feel like one is driving along a lovely, idyllic country road with no shoulder and barely two lanes, but the speed limit of 90 km/h suggests otherwise.  Coming towards a fast-moving car in the other direction on this 'highway' with just inches to spare in between is unnerving to say the least.  The navigational devices also make it possible to avoid ending up on an impossibly narrow centre-ville (city center) street amid throngs of tourists, an equally nerve-wracking experience.  While we might find such old European town streets as quaint, these are thoroughfares in many towns, and the locals zip right through them.

The autoroutes (freeways) are generally quite distinctive as they have tollbooths along them, and are in generally good condition for speeds up to 130 km/h and generally better signed.  We pay for all this, but we can't seem to discern a consistent rate for the tolls, so we just have lots of change available or use our credit card.  The freeways also have speeding cameras at regular intervals for which there are signs that give drivers ample warning, so you know to adjust your speed.  Yet, these speeding cameras have confirmed for us that there just is a great deal of inconsistency in French driving culture.  While we see creative parking and driving with seemingly little traffic regulation (we hardly ever see tickets being issued for traffic violations in town), and all kinds of roads in all kinds of widths, and lots of roundabouts with varying numbers of exits jutting out of them, the French are not terribly flexible about particular driving rules, such as speeding on the freeway, AND their transportation bureaucracy is remarkably efficient in this regard.  Just this week, Allen received a very important piece of mail from the government, which I was sure was his permanent residence card, but which was in fact, un avis de contravention...a speeding ticket.  Our hot rod was photographed with a freeway speed camera going 76 km/h in a 70 km/h zone near Toulon on Nov. 1, 2011, and the license plate that must have appeared in that image was connected to Allen's car registration, et voilà (ta-da)!  Just 10 days later, a 68 euro ticket for driving 6 km over the speed limit appeared in our mailbox.  While the 6 km/h over the speed limit may seem like splitting hairs, the instructions on the speeding ticket state that if we pay the ticket within 15 days of the transgression, we pay just 45 euros, or if we overlook it for 45 days, the fine goes up to 180 euros.  Not only do we have the option to go for a reduced rate, the website for the telepaiement par carte bancaire (online credit card payment) is actually available in English!  (That must mean that there are an awful lot of English-speaking drivers who get caught speeding here...)  Finally, we also have the option of disputing the fine, but unlike in the U.S. where I might very well write a persuasive letter about our good-faith effort to drop to the suddenly lower speed limit, knowing what we know about the workings of French bureaucracy in general, we are just going to pay the 45 euros and drive on.