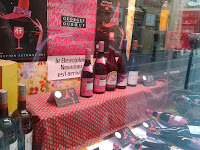 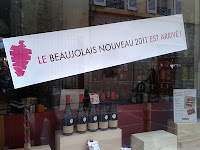 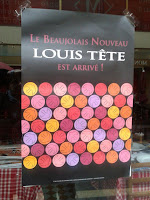 This past Thursday, the French gave thanks....for the release of this year's Beaujolais wine (and they call this release the Beaujolais nouveau, the new Beaujolais).  In Beaujolais country, in Lyon, for example, Thursday was a social evening of wine tastings in restaurants all around the city.  In Aix, the celebration is considerably smaller, but we went out for a delicious dinner with our Lyonnaise friends and drank a bottle of this year's new wine.  (For my food-loving readers, I had magret de canard-duck breast, with a delicious puff pastry encasing chévre-goat cheese, a fig and some lard-French bacon, and a cabbage and carrot salad on the side.  Délicieux!)   The funny thing about Beaujolais is that everyone we've talked to, French and otherwise, dislikes Beaujolais wine!  So the release of this very young wine (a friend likened it to grape juice) is largely a marketing ploy by the Beaujolais vintners.  Apparently the wine is popular in Asia and the commercial release is more appreciated in Japan and in other locales than it apparently is here.

The Beaujolais actually would probably go very well with turkey, the center of another celebration of thanks, which we Americans will recognize this upcoming Thursday, and which I have the task of marketing, in a way.  On Thanksgiving, our children will go to school as usual, but they will spend their lunch hour enjoying a Thanksgiving feast at a local restaurant with about 40-45 Collège Mignet section internationale students.  I have been asked, as the token American parent, to speak about the Thanksgiving tradition to these children.  I haven't decided exactly how I will present Thanksgiving, given the myths and realities associated with the origins of our current turkey feast.  (That shared meal between the starving pilgrims and the generous Wampanoags was probably not as friendly, innocent or gracious as we were taught as children, nor did it likely involve fat turkeys, mashed potatoes or glorious pumpkin pies. And, the later ramifications, for the emerging United States, are often celebrated while those for native American societies, are usually overlooked.)  I also cannot avoid seeing the sociological implications of a holiday in which the day's rituals reinforce traditional gender roles and bring to fore intense familial relationships and rivalries that threaten to upend the turkey dinner itself (see Jodie Foster's film Home for the Holidays).  My poor students have to re-examine their own experiences of Thanksgiving each fall quarter, and I'm afraid they never think about Thanksgiving in the same idealized way again.

The French seem quite interested in the idealized view of Thanksgiving, perhaps because of what they have learned from Hollywood films and other media.  Several French friends are eager to taste a Thanksgiving meal chez nous (at our place) while another French friend seems to recognize that it is an important family holiday.  For our part, we'll be curious to see how the French chefs will interpret the Thanksgiving meal at the local restaurant next week.  Le dinde (turkey) is available here but I haven't seen any 10-12 pound birds at the charcuterie/boucherie (meat shop/butcher), nor have I seen many French ovens that could even accommodate that, let alone the side dishes.  (We'll wait to try after we get settled into our new apartment and our pots and pans finally arrive, something for which I will be truly grateful!)  For dessert at the restaurant, a French parent is making and bringing in the pumpkin pies, which she must be making with the pumpkin-like courges (squash) we've seen at the market.  I shall do my best to offer an engaging explanation of American Thanksgiving, perhaps first by framing it with the idea that many societies have rites of thanksgiving particularly after harvest time.  In this way, Thanksgiving is a typical social ritual.  Then I will recount the loose roots of the American version and the ways in which this day of thanks is celebrated today, with food, family, and American football.  Perhaps that last part will grab the attention of at least some of the kids.
Posted by Anne Tuominen on Sunday, November 20, 2011