Ritual is an important element of social life, one that marks certain milestones in life, or passages in a year, and that creates what we in sociology call social solidarity, or that sense of connection with others.  Autumn comes with many such rituals, related to harvest and food as well as to ancestors, that herald the return of winter and dormancy.  Here in France, l'automne (autumn) is marked nation-wide by La Toussaint (the All Saints holiday that gives school children up to 8 days off).  The actual All Saints holiday is November 1, and the day before, All Hallow's Eve is a holiday as well (we know it as Halloween in the U.S.), but the children have been off since this past Monday (Oct. 24).  In Aix, we haven't seen much by way of jack-o-lanterns and goblins, but on Wednesday as we were walking throughout town, we saw one Spiderman and later, one princess, walking along with their families, and we also some large pumpkin-like squashes at the market.  We further noted that the florist adjacent to the local cemetery was over-stocked with mums and other flowers in anticipation of families making their annual pilgrimages to commemorate their ancestors this upcoming week. 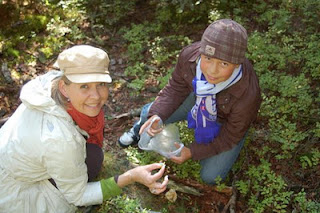 Another ritual of autumn in France involves the foraging of mushrooms.  Last weekend, we had the amazing opportunity to join a group of French families on a mushroom picking expedition on a mountain near Lyon.  Last week (October 16-23) happened to be the semaine nationale du champignon, (the national week of the mushroom), and we foraged for two hours before returning to celebrate our success at a beautiful home on another hillside outside Lyon.  Apparently, the harvest was smaller than in previous years, as this group of old school friends has been foraging together for several years now, but Saku and I particularly enjoyed the thrill of finding the elusive chanterelles, with their yellow and gray colors and vein-y undersides!

All in all, our group collected enough mushrooms to provide 30 of us with a healthy dollop of chanterelles cooked in cognac, crème fraîche, salt and pepper, alongside some hearty parmentier de canard (shepherd's pie with duck), and green salad adorned with some raw cèpes (porcini mushrooms) that were also found.  I might add that this was all accompanied by a great deal of red wine, a cheese course, as well as a sweet, cherry-red Lyonnaise dessert called tarte aux praline (praline pie). Delicieux!

We are really grateful to have been able to experience such an important seasonal tradition with native French families.  Not only have our culinary senses been rejuvenated, so too have our French vocabularies and our understanding of how food and ritual connect French friends and families to each other.  It was a truly magnifique week-end champignons.