We are licking our chops in anticipation of a traditional Thanksgiving meal here that we will prepare à la maison (at home).  While I've got the American fixings for pumpkin pie, we'll work with French ingredients for the rest, as I'll be ordering la dinde (the turkey) next week, the bottle of bubbly aperitif came back with us from the Loire Valley, the pommes de terre (potatoes) originate in French soil, and the stuffing will be made with the ubiquitous French baguettes, stale ends of which are always found on our kitchen counter.  Most importantly though, this food-based ritual, regardless of its origins and its ingredients or even where it's actually taking place, will be enjoyed like other culinary rituals: it will be communally-enjoyed, among friends or family, and it will include renditions of les plats traditionnels (traditional dishes).  We've participated in several such rituals this autumn already, as we await our own celebration.

~In October, we enjoyed aperitifs with two Canadian families in honor of Canadian Thanksgiving.  It turns out the traditional Canadian meal isn't so different from the U.S. version, even though our friends' version is vegetarian and the dates for the thanksgiving meals are about a month apart.  What was perhaps unusual was that, by French standards, the gathering took place early, at la bonne heure, and by North American expectations , we should not have been able to have our drinks outside  (but it was a fall Provençal afternoon which means it was sunny and mild).

~A week or so later, we joined Lyonnaise friends in a French country house kitchen to enjoy a meal typical of Martinique, a French island in the Caribbean.  That meal was prepared by the visiting father of friends, who had brought several 3 liter boxes of dangerously tasty Island rhum agricole (two drinks of rum mixed with syrup or jam plus lime was clearly enough for me, judging from my headache the next morning).  The meal itself was coq (rooster), with all of its 'special' parts (yep, the 'coq' part too), slow-cooked in a jerk-type sauce, accompanied by a dish of beans, all served over rice.  Tasty!

~The next night, I crossed off 'taste wild boar' from my bucket list.  Along with 30 other people at beautiful candelit tables, we enjoyed a very French autumn meal that started late and ended late (I missed dessert by going to bed around midnight).  We ate dark, rich sanglier (wild boar) prepared in a daube (a wine-based stew) and accompanied by pommes dauphinoise (scalloped potatoes) and sauteed mushrooms, chanterelles and pieds de mouton (a mushroom called mutton's foot).  Alas, the mushrooms were not of our own picking.  To my vast mushroom picking experience, I can now add digging for them through the snow, which is how our mushroom picking expedition ended up earlier that same day.  Fortunately, a champignonnière shop at a lower elevation village with a good supply of mushrooms saved the meal, or at least added to it, as did all the good wine, including my new 'fave', another delicious Chateauneuf du pape wine, Domaine Chante Perdrix. 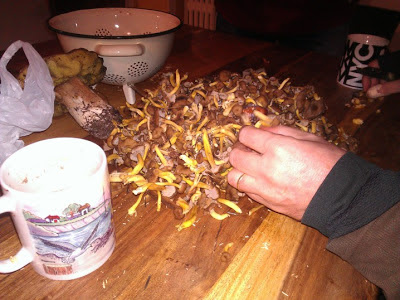 ~This week we tasted Algerian specialties, including samosa-type appetizers filled with seasoned ground beef, a chopped red pepper sauce on mini-toasts, followed by the tomato-based and wheat grain-thickened chorba, the soup that traditionally marks the end of Ramadan fasts. Our French-Algerian friends then served us couscous with stewed vegetables and beef and chicken, all cooked in a cocotte minute (a pressure cooker, a very popular item in French kitchens).  Because of Islamic and family traditions, we did not drink wine, but our pineapple upside down cake dessert and the wonderful hospitality were accompanied by the deliciously sweet mint tea. 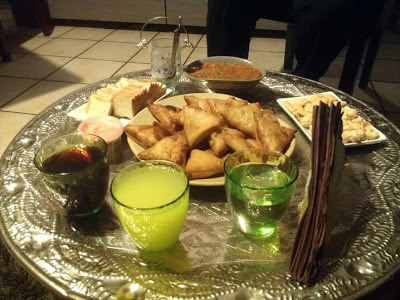 ~And finally, while it wasn't a meal, last weekend, one son and I picked olives, an autumn food-based tradition here in the South of France which was every bit as communal and international as our meals this past month, given the friendly conversations in multiple languages taking place among pickers.  We didn't taste the fresh olives (they aren't considered edible until cured or pressed), but the result of our tree climbing and shaking efforts will result in bottles of olive oil, a staple ingredient in many French dishes. 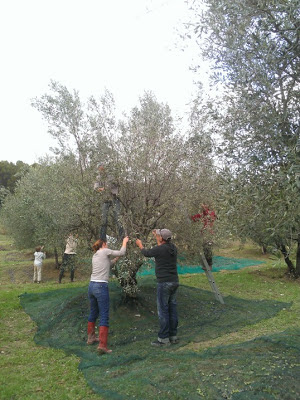 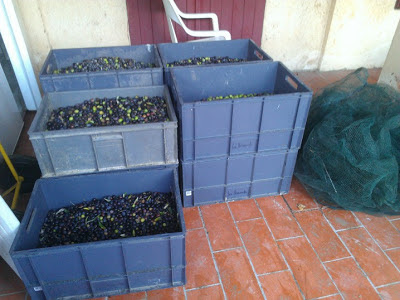