We've been smelling du shit all summer, at home and at the beach.  Attention (beware), Anglophone readers: I'm not talking about doggie do-do on the sidewalks.  Du shit is marijuana, a substance with its own distinctive smell.  (Du shit is another one of those faux amis, or false friends, where the same words mean very different things in French and English).  A neighbor seems to have an insatiable appetite for l'herbe (grass or marijuana), and luckily for that neighbor, the drug capital of Europe just happens to be down the road from our town (as well as from the beach), so a direct supply line isn't too far away.  That supply line, however, is probably one source of the violent conflict that has been taking place between rival drug gangs in Marseille all summer, resulting in nearly two dozen deaths.  (Update to my post: Click here for a NY Times article summarizing the situation, 9/19/2012.)  A new national level police commissioner has been appointed just for Marseille in an effort to get a handle on the situation, while a news magazine today has called Marseille, which is France's second most populous city, a 'lost territory', and ponders how we have arrived at this point. 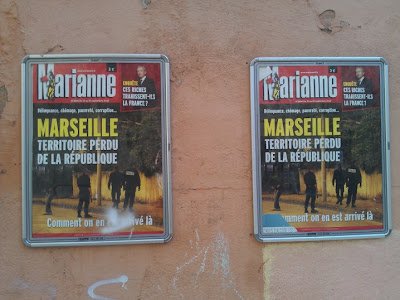 I do not know Marseille well, having visited just a few times, and I have yet to feel drawn to it, despite its potent sociological appeal.  Demographically, it is an extremely diverse city, both in terms of ethnoracial identity and age.  About 20% of Marseillais are foreign-born, and they come from all over: Spain, Italy, Corsica, Armenia, Turkey, the far East, northern Africa (Algeria, Tunisia, Morocco), central Africa (Ivory Coast, Mali), southern Africa (Comorros).  We got a glimpse of this rich variety last fall at the prefecture in Marseille.  I felt very white, blonde and boring, as I watched families enter and leave the waiting room for processing work and residency permits.  I was entranced by the colorful veils, scarves, saris, caps, headdresses, bangles, beads, gold jewelry, and by the huge variety of skin tones and ethnic backgrounds (the ones I could surmise anyway).  On the other hand, I also recognized the impoverishment and subtle desperation in the demeanors of some in that room and on the steps outside the building.  In fact, Marseille will not be the promised land for all of these comers.  Because of the persistent immigrant flux, the unemployment rate is high and the city is relatively poor by the standards of other French cities.  One sees this just by looking at the city's urban core; parts are dirty, dingy, and gray, with copious graffiti adding rough swatches of color both to once-elegant apartment façades and to newer cement apartment blocks.  I have also felt, more than once, a slightly menacing ambiance along some streets, particularly those that appear virtually empty in the center and those that are filled with idle men sitting at cafes passing the time while nursing their pastis (the famous Marseille anise-infused aperitif).  When legitimate or lawful economic opportunities are few, illicit ones, like drug trades, will exist and persist (as may drug wars and other related phenomena).  Unfortunately, the social and physical environments will reflect those.

Does this mean Marseille is a city lost to drugs?  It has always been an unusual French city because of its grittiness and multiethnic character.  Perhaps the civic pressure is reaching a bubbling point right now, as Marseille is just about to become the 2013 European Capital of Culture.  It feels like there is still much to be done, with significant construction underway, creating persistent traffic problems in major parts of the city, not to mention the security issues posed by the criminal activities in a few districts.  I am sure Marseille will eventually ascend to its role as capital of culture, and perhaps it will shed its other 'capital' reputation, if for a short while.  As I have discovered, sometimes the paths to achievements here in France are those that are the most sinuous and least expected.

Speaking of such paths, I took one last Friday evening in Marseille, in a part of the city I had never seen before.  We drove into and through the urban center, then along the beach in the 8th arrondissement (district or section of a city), all the way south until the road narrowed and became bumpy and then ended.  We left our car and hiked along a rough-hewn rocky path through a calanque (rock formation) for about 100 meters, towards the very tip of the calanque, to the very tip of France in fact.  And there we found a little Marseille restaurant, hidden truly at land's end, where we ate the freshest dorade (snapper or bream) we have ever tasted, while looking down at the roiling turquoise sea just meters away and at the dramatic rocky islands in front of us.  What other 'lost' treasures does this city have for us? 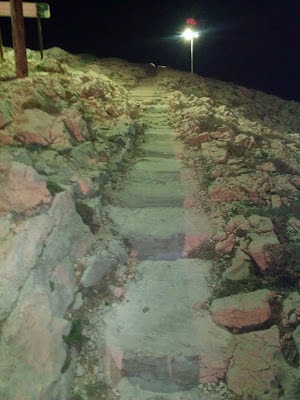