What a difference a year makes!  After a steep learning curve last September, this year we have managed la rentrée (what the French call the return to school, work, and normal life after the summer holidays) quite nicely.  By ourselves, we have purchased our own school supplies at Carrefour and Geant Casino, completed the forms for school, written our own checks for school lunches and sports registrations, and arranged our French classes.  It helps that our French has improved (not greatly, but enough) and we understand better how the French do things.  Yet, as I wrote many months ago, learning the customs in a new social environment, whether it is a school, social group, or even a society, is often a remarkably humbling experience, (see Humilité), and it is also a persistent one.  After one year, the lessons continue!  Here's my latest one:

To start the school and sports year off right, I decided while sitting at the sidelines of a soccer tournament last weekend, to engage my closest and most patient French friend with compiling a list of names, of my boy's teammates and their families.  It still amazes me that last year, I managed to faire les bises (kiss cheeks) with people multiple times a week at youth sport practices and matches yet I barely learned anyone's names.  It's like these weren't important.  I never even learned the soccer coach's last name last year.  In contrast, in the U.S., we have rosters and lists with the contact information, for sports teams, classrooms, schools, clubs, employee groups.  And, when we greet each other with handshakes, at least the first time, we almost always exchange first names.  In the first week of any U.S. course that I teach face-to-face, I memorize all of my students' names, to create more direct connections between me and them and to facilitate more active student participation during the course.  (I really do!  I do not however retain the 40 names in my head beyond the quarter, as I have new names to memorize and limited cerebral capacity.)  Here in France, upon meeting someone new, I have taken to introducing myself by saying my first name while exchanging kisses.  I think though that in that side-by-side motion of les bises, rather than with the direct gaze that comes with facing someone and speaking one's name while shaking hands, the French person is not really understanding the pronunciation of my Finnish name, and I certainly can barely make out the mumbled response.  (Did he just say Laurent? Vincent? Or did I hear a different sound at the end; was that Florian? Julian? Lucien?) 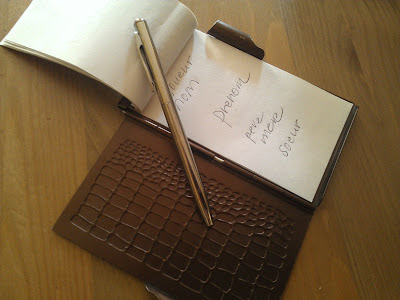 So, last Saturday, my friend and I began making a soccer team list for me, and it quickly became a game for some of the other parents on the team who joined in.  The entries grew into a list of the prenoms (first names) of players, parents AND siblings, even some of whom I'd never seen at any matches or were long grown up.  It became clear that the parents didn't all know each other's names even though most of the team had been together for almost two years.  Names were being tossed around, guessed at, and then spelled to me in rapid-fire French.  At one point, a soccer dad looked a bit startled when asked by one of my helpers for his absent daughter's name.  I piped up, explaining that I was trying to learn everyone's names, and I added, with a smile, that perhaps I could greet him by name the next time I saw him.  He didn't look relieved or convinced by this, even though we have exchanged dozens of bises with each other by this point and have attended at least 2 tournaments and many trainings together.  When I decided I also needed everyone's noms (last names), I passed the notepad over to a helper so that the French names could be written down more quickly.  After we accounted for all the players, the list was done, the game was over, and I put away my notepad.

I later realized that the list wasn't actually complete because we had forgotten to list the coach and his daughters.  I also realized that no one had thought to ask the names in my family.  Did the others not care about our names?  Why was this such a novel thing, to compile a list of names?  Nadeau and Barlow in their insightful book, Sixty Million Frenchmen Can't Be Wrong: Why we love France but not the French, suggest that the French conceptions of public and private spaces, behavior, and information differ from those of North Americans and I would say, of many northern Europeans as well.  The authors relate an experience which in a North American context amounts to a fairly intimate exchange, a visit into someone's home.  In France, such a visit has different implications, and it does not automatically imply that the names of the visitors or hosts will be exchanged.  Imagine visiting someone's home without learning their name!  Nadeau and Barlow suggest that exchanging names and occupational information in the French context amounts to a very private, intimate exchange, whereas having someone over for aperos (drinks) is a public, social activity that does not require the exchange of personal information.  The same must be true of sports events; the French families spend hours and hours together, eating together, and watching the children play their hearts out together, sometimes with great emotion, but to them, we are not in a social setting, or participating in a social activity that requires us to know the names of the people around us.  Clearly there are some different understandings and perspectives of what is private and intimate information and behavior, and what is fairly public or open.

Given my bicultural upbringing, I have had lots of experience switching between cultural contexts and with changing behaviors to match those contexts.  I'm sure those experiences have helped me and my family 'go local' here in France.  We can follow the customs, but sometimes we haven't immediately understood why the customs are the way they are.  It helps to remember that people see their social worlds in different ways for all kinds of reasons.  After all, it's partly the sociologist in me that makes me need to figure out people's identities.  I want to know where they are from, what social groups they are a part of, and what they do.  Knowing people's  names helps me sort them.  I do understand why that soccer dad does not mind being nameless, or maybe even prefers it, given the social world he lives in.  My world though is highly colored by my sociological perspective and my multicultural life; in that world, I need to know who this father is!
Posted by Anne Tuominen on Monday, September 10, 2012

Fergus's baseball coach's wife (Anne Davis) even made us little laminated cards this spring with players' and parents' names for us to carry around!