In a French book I just finished, about the experience of the two young French brothers who survived the Titanic sinking (as it is imagined by the daughter of one of those survivors, Les enfants du Titanic: l'histoire vraie de deux rescapées, Elisabeth Navratil, 2012), I learned a very useful phrase, les files d'attente (the waiting lines).  I have written about waiting lines in France several times earlier, and unlike what must have been a line of increasingly desperate and impatient Titanic guests waiting to get on life boats, the French in general seem to endure waiting lines more complacently and certainly very frequently.  The French faire la queue (stand in line) multiple times a day, at the grocery store cheese counters, check- out aisles (see Je ne sais quoi), bakeries and butchers, and I've been told more than once to take a book with me if I need to do business at the government offices for car registrations and immigrations (see Les Documents for a remarkable photo of the wait list screen at the Marseille prefecture last summer that shows how slowly government workers seem to move; only the officer at counter 10 was seeing a client, #828, at that moment, while there were hundreds of others waiting to see someone about their immigration papers.).  I have also recounted the rain that preceded my driving theory exam (Humilité) but I neglected to mention the nearly 2 hour wait for the start of the exam: scheduled time 8:00 am, actual time after 10:00.  I can tell you now that that experience was followed some weeks later by another file d'attente, this time in the hot sun in a dingy parking lot, for the practical driving exam.  The posted time of the exam, 9:45, was actually the time that the four students from my driving school were to arrive at the parking lot, driven over by one of our instructors.  After a private conference between the instructor and examiner, each student drove off with both instructor and examiner for about 25 minutes while the rest of us waited.  My exam, the last one, was underway finally around 11:15.  (Despite the heat and too much time to worry, I did pass, by a comfortable margin.  Even there though, the French tested my patience, because I had to wait an entire day for the results!)

While it might seem that there is some French exceptionalism to waiting in line, it is also very likely that French companies and organizations are quite aware of and use the copious scientific data available on line-waiting.  Alex Stone describes some of this research briefly in his recent New York Times piece.  ("Why Waiting is Torture." August 18, 2012. The New York Times online ).   For example, psychological studies suggest that consumers wait in lines more easily and with less complaining when they are occupied.  The larger supermarkets in Aix keep their shoppers who carry les cartes de fidélité (club cards as we call them in the U.S.) busy by letting them scan their own groceries with individual, handheld scanners, as they shop.  The shoppers then place the goods into their carts, directly into bags they have brought from home.  Then, these special shoppers stand in separate, purportedly shorter, automated check-out lines to process their scanned purchases.  The time-savings is questionable though, as we have been stymied more than once by long check-out lines for completing these transactions and by 'error' messages requiring assistance from clerks anyway.  Consumers though feel less frustrated if they are doing something worthwhile even if the wait isn't shortened.  At another smaller grocery store, I can get the weather report and my weekly horoscope on the television screens above the check-out area as I wait for the customers ahead of me. 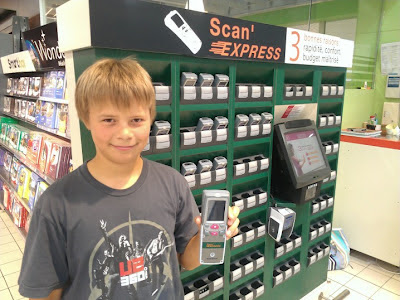 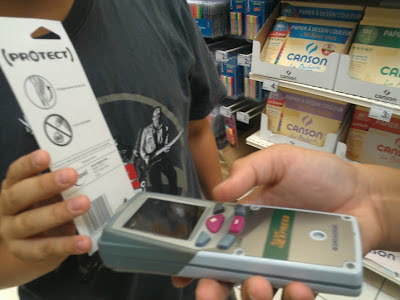 Another line-waiting 'trick' detailed in the research is to provide customers with a sense of their progress in line, as they also tend to be more satisfied when they feel they are moving along quickly.  The inflated waiting times at Disneyland attractions as described in Stone's article are likely mimicked by French companies.  Recently, while waiting to chat online with a customer service representative at Orange.fr, my French cell phone service provider, I was periodically updated with my 'wait status', and even if there really weren't 10 customers ahead of me already chatting, I was able to do something else at my desk while tracking the dwindling number of chatters ahead of me until it was my turn.  It seems we all appreciate knowing that there is a clear end to our waiting.  I can tell you that when confronted with uncertainty in this regard, the French are every bit as impatient as people elsewhere.  We hear furious car horn honking multiple times a day as files d'attente appear along our narrow old town street when delivery personnel stop their vehicles suddenly to make a delivery, or as private individuals load or unload their cars or parallel park their cars into tiny spaces or simply can't decide which way to go.  I have even been yelled at by an impatient, rude, gesticulating French driver as I was standing on the street when my departing visitors held him up for a few minutes as they loaded their car with their luggage.  That was at once a uniquely French experience as much as it was a universal one.
Posted by Anne Tuominen on Friday, August 24, 2012