During a break in my two-hour driving lessons this week, my driving instructor lit up a cigarette comme d'habitude (as usual) and asked me about sociology.  I explained to her in my limited French that one thing we do is look for patterns in social interactions and that many social patterns are in fact universal across societies.  She was skeptical and suggested that in France, the social classes are quite distinctive and separate from each other.  I suggested to her that all societies have social classes or social distinctions of some type, but that it is mostly in the details that the differences exist between societies.  This is perhaps the main point of most of my blog posts over the past 11 months.  Social or cultural differences exist, but by and large, culture itself is the same force in France as it is in the U.S. or anywhere else.

For example, this past weekend, we spent an entire day with French families, first at an all-day soccer tournament in another French riviera town, St. Cyr-sur-Mer and then at a barbecue in the evening among friends closer to Aix.  The language we spoke all day was not our own, but the interactions, the conversation topics, the way we spent our time were all very familiar.  We have found a new football club for next year with similar esprit d'équipe (team spirit) and inclusiveness as we had in Seattle.  The families all support each other, traveling, sitting and picnicking together at the tournaments we've attended.  Over the course of the past Saturday, we shared chairs, coffee, snacks, we cared for the coach's young daughters, and we even celebrated the end of the saison (season), with a team visit to the beach to cool off in the Med.  Later in the evening, our family attended a barbecue at my husband's colleague's home among friends we have met through him and his wife.  Like in Seattle, we shared stories, jokes, and observations over delicious food and good wine; the bonus was that we actually could follow some of the conversations better and participate more actively.

Both social events thus were very similar to our experiences at home, but in the cultural details they were different.  First, there is that way that the French have, to take things so easily, that je ne sais quoi (this means literally, 'I don't know what', and we use it to signify an undescribable quality).  The endless waiting at soccer tournaments is nothing new to us, but as we got into the afternoon, still under the unrelentless southern sun with some of us sitting on the bare ground, and with the lack of any posted information about the next matches or if we'd qualified for the remaining rounds, my family was beginning to get antsy.  Yet no one else was sighing, or rolling their eyes, and the kids, young and old, were amazingly patient over the long hours, entertaining themselves with our son's i-pod or playing different kinds of games with a soccer ball.  As we've noticed at many other tournaments, the French families seem to rarely obsess about time or the lack of information, good parking options or plentiful bathroom facilities.  They just shrug and patiently hang out.  I've seen this same je ne sais quoi at the grocery store when a growing line of shoppers stands expressionlessly while the little old lady at the front counts out her coins and slowly packs her grocery sack.  Even the cashier sits patiently.  Such nonchalance also extends to social evenings, where arrival times are never expected to be precise, we can bring something to share or nothing, and the meals begin and end late.  It seems our family is always the first to leave these evenings, this time departing the barbecue 'early', at midnight, just after eating dessert. 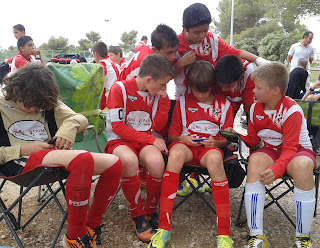 I have a theory that the quality of taking things easily is related to cigarette smoking. Unlike in the U.S. where we encounter very few cigarette smokers in our social circles, there are many, many adult smokers here (and unfortunately young ones too), spread across all social classes.  I figure that almost half of the football parents smoke as does the coach (and he is not the only coach we know who smokes regularly), and on our other son's rugby team, I'd say half of the mothers smoke, and among our French friends outside of sports, perhaps one-third smoke.  My driving instructor smokes, and all along our street, rug merchants, tattoo parlor owners, hair stylists, and restaurant staff all stand outside for short smoke breaks many times a day.  Cigarette smoking is not looked down upon here; it is a cultural norm, and the act of smoking itself does force one to slow down.  Yet, because it's so common, I have begun to wonder if the effects of the nicotine in fact help foster the relaxed attitudes that the French have about schedules, parking, and waiting?  Because I've never been a smoker, I can't say for sure, but might the apparent cultural distinction be related to a physiological effect resulting from nicotine?  I say this, because I happen to know that despite the apparent casualness towards planning, the French families are just like our family friends in Seattle in that they spend time and energy preparing and organizing.  They prepare lovely meals for guests and have endless bottles of wine, they put together amazing salads and snacks for tournaments, they pack their cars with portable picnic equipment and parasols and even bathing suits for possible beach outings.  This is all a lot of work.  Maybe the smoking helps lower the stress of remembering the details?  Whatever it is, we are not planning to adopt the smoking habit ourselves, but I think we are beginning to learn to take things quite a bit more easily here.  That's a good thing, especially now, when the summer heat makes everything slow down anyway.
Posted by Anne Tuominen on Monday, June 18, 2012