I know where the expatriate ladies do lunch in Aix.  Last week, my Canadian friend and I scored a table sans reservation (without a reservation) at a lovely restaurant adjacent to a fountain, and it became clear by the end of the meal that this was the place to have lunch, particularly for English-speaking expatriate women.  Is it because the wine is pink and chilled, and the waiters speak English? (Coincidentally, I posted a photo of this chilled wine in my previous post Rouge or rosé, and I describe a meal at this same restaurant last November on the night of the new wine release, see Beaujolais Nouveau.)  Or, it is because expatriates tend to connect with each other wherever they are in the world, and sometimes they just coincidentally converge on the same restaurants at the same time?

While I've not become heavily involved with the expatriate organizations in Aix, there are many of them.  I'm most familiar with the English-speaking organizations which connect primarily the large numbers of North Americans, Brits, and Down-Unders who are here.  These groups create a sense of community and serve as important resources among people undergoing similar experiences.  This is not unlike older immigrant communities that have served to integrate, support and even assimilate their members in new countries over the centuries.  In the West, I'm thinking of the Chinatowns and little Cubas or other international districts in larger cities.  In these communities, ethnicity or national origin and language have been the typical ties that have bound people together to share resources and information so that they can successfully forge new lives in their new homes.  The differences with the contemporary expatriate communities is that in these latter communities the members seem to be connected most closely by their social class backgrounds.  Most of the expatriates seem to be relatively well-educated, of middle to upper middle class, and their occupational roles have largely transferred laterally here.  These are people who have been able to find or create professional positions for themselves on par with what they left behind, and who are not starting at the bottom of the the social ladder like earlier and less privileged immigrants have often had to.  Even those who do not speak French well do fine here, because in a sense, their educational and social statuses trump their linguistic deficiencies; they know how to get information and learn quickly how to work the system, so they are able to hit the ground running. 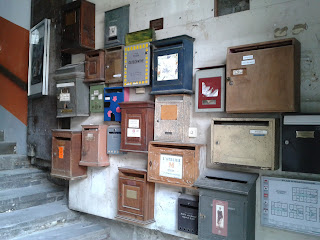 One particularly important tool for these expatriate communities is the use of online resources.  Certainly, such resources and online access are available to everyone these days, but many expats, because of their educational and social backgrounds, are particularly adept at using online tools to connect and seek information.  They may also have more time and access with which to log in most effectively.  Here and now, expatriates are emailing, twittering, texting, and blogging, as they connect to other expats like themselves, and these much more immediate ways of communicating have largely replaced the letters and phone calls that immigrants of the past had to really on.  (That's a wall of old mailboxes photographed in a passageway in Marseille several months ago.)  I am particularly aware of the expatriate blogging communities in France, but they exist all over the world.  While there are broader ones centered on Paris and in other large areas, I'm noticing in Provence and in other regions of France, smaller, tighter blogging communities of primarily Western, middle to upper middle class women sharing their experiences here, asking questions, telling some of the same kinds of stories (of the endless rosé, the escapades of the French villagers, the familiar frustrations with the French ways, etc.), and posting stunning photographs of quintessential French scenes.  Some of these women appear to have formed online friendships and avidly follow or link to each other's blogs.  (My little sociology blog here on which I'm recounting our experiences from a sociological perspective doesn't even register on these amazing networks of French-themed blogs.)

The concentration of women bloggers, especially American and English-speaking women married to French husbands, is notable, but they aren't alone; there are all kinds of other expat blogs, of Finnish women (and no doubt Spanish and Italian and...) living in France (is it the water, or the French men?), of Irish and Dutch expats farming organically or restoring houses in France, of Christians evangelizing the secular French, and so on.  This suggests to me that expatriates, even those who are well-educated and economically-privileged, have the same needs to connect socially with each other that many other earlier or less economically stable immigrants have.  The Internet facilitates these connections, by giving opportunities via les blogs (the blogs) to share and link and relate virtually.  Yet, sometimes virtual connections may not be enough, and we want face-to-face contact with someone who speaks our language.  Then, we rely on the French to facilitate our social connections, by doing what they do particularly well--providing us with good dining opportunities and delicious food and wine, at lunch or anytime.  With these we share our expatriate stories and experiences and renew our spirits for yet another day.  Santé! (Cheers!)

Interesting observations, I certainly agree regarding the support of an online community with similar interests, I stumbled across my own by chance, not anticipating how interactive blogging is and how close to one's own interests those who follow it are.

Happy to have discovered your insights via Aixcentric :)