The first week of public school in Seattle usually involves a myriad of paperwork to be completed by the parents of the schoolchildren.  The dreaded "First Day Packets" at the boys' elementary school required an entire evening of completing forms and writing a nice pile of bank checks. Well, guess what?  French parents undergo similar torture in the first week.  And before I begin to list out what these French first week forms entail, I must describe what I've already turned in to enroll the boys in French public middle school: school transcripts from last year, immunization records, 5 passport photos, copies of passports, and birth certificates.  The boys' school forms from the first week request proof of liability insurance for each boy, my address and profession and phone number and Allen's address and profession and phone number, all noted at least 4 times, copies of our bank routing number (in case we default on the school lunch payment presumably), another set of 5 passport-sized pictures for each boy, signatures agreeing with the noted condition of the school books, signatures releasing the boys from school, and several bank checks.  Bank checks would not be so problematic except that we don't have a checkbook yet nor is my name on our bank account.  The latter requires a copy of my passport and my marriage license and I don't know what else. In the meantime, I'm limited as to how much cash I can withdraw daily and weekly with Allen's card, and how much I can charge with the card each week (and the amount is not enough for a family of four to live on; they must have thought Allen was as single guy).  I'm down to my last 10 euros this afternoon; we've got the money in the bank, but we can't get to it!  (Unless we file more paperwork.) 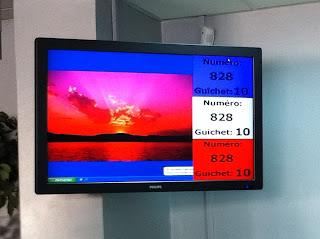 Also this week, Allen received his carte de séjour (residency card), after only two 4+ hour visits to the Prefecture in Marseilles, which required waiting in just 5 different queues for a limited number of service windows (see photo), and assembling these mere documents: copies of everyone's passports, a copy of our marriage license, copies of birth certificates, 5 passport pictures (the first batch was not approved), a copy of our French electricity bill, and letters from his company and from French Immigrations itself.  The temporary residency card is only good for 3 months when it must be renewed if the long-term one has not yet arrived.  Interestingly, the card lists his American parents' names but not the name of his long-suffering wife who sat with him on those hard chairs all morning this past Tuesday and the previous Thursday!  (What was that marriage license for, then?)

Even more impressive is the application for Saku's soccer club.  For this I needed to bring in all of our original passports for scanning in the club office, proof of liability insurance for Saku, proof of residency (that electricity bill again!), a letter from his former soccer club, a completed application for a player license for the football league, more passport-sized photos, and a signed medical release from a French doctor.  A new friend who helped me decipher the boys' school forms kindly recommended a doctor for the sports' medical certifications.  The doctor was a very nice man who understood that we'd had check-ups in the U.S. just a few months ago, but of course, we needed the French stamp of approval.  He asked me about their health and spent all of two minutes checking each boy out, filled in a brief form for each, and in exchange for 24 euros each, we got the rubber stamp and a signature.

The folder we have for the carte gris (the gray card, or car registration) is nearly an inch thick.  It not only includes such documents as described above, but also our car insurance documents AND copies of the passports of the couple who sold us the car and an explanation from them as to why the sell date and the check date are a day apart.  Alas, the actual registration card is lost somewhere in the mail, having not reached us due to an incorrectly written address.  When I went to the post office with the tracking number, the postal clerk reported that the envelope had been returned to the sous-prefecture in Aix  (despite the sous-prefecture clerk's denial).  When I protested and asked what I should do, the postal clerk took my paper scrap with the routing number on it, wrote a note to the sous-prefecture, signed it, and pounded it with yet another big rubber stamp.

Every society has its procedures as to how to keep its citizens, its visitors, and its affairs in order.  Complex societies with large populations especially have to do this.  I have certainly collected my share of documents and completed forms for the boys' U.S. schools and sports clubs, for immigrations and citizenship procedures in the U.S., Canada and Finland, as well as for human resources departments at various places of employment.  And, I have to be fair, the paperwork and processes here are presented in a language that I do not speak or read well yet, so that has added to the difficulty and the frustration.  However, I will still have to award the French bureaucracy the prize for requiring the most redundant documentation.  I am beginning to accept this redundancy as I now possess, for the first time in my life, an official copy of a Finnish birth/baptismal certificate, written in both French and English, that I felt compelled to order earlier this week from Helsinki and have sent to me in France.  I am really looking forward to the opportunity to prove to anyone that challenges me, that I am who I am, as indicated by: my passport(s), my marriage license, my driver's license, my children's birth certificates, AND my own birth certificate.  (If they ask for the electrical bill for further proof, I'm out of luck...it's in Allen's name only!)
Posted by Anne Tuominen on Friday, September 09, 2011

I shall never complain at the Licensing Office again - even though I have to drive to Lynnwood and it isn't open on Saturdays. I shall not. Complain.