I just read an article in the New York Times magazine about a reporter who took his family to Russia and put his kids in a Russian-speaking school, not unlike what we have done here.  (Levy, Clifford. Sept. 15, 2011. "My Family’s Experiment in Extreme Schooling: What happens when you take three American kids and throw them in a classroom 5,000 miles from home where they can’t speak the language?"  http://nyti.ms/q4Mhe2 .)  Our situation is a little different in that the boys' school offers an international section which means that about 8 hours a week of instruction, in their English and history-geography classes, is in English.  So the immersion experience is not quite as intense as it was for the Levy children in Russia.  But, most of our boys' days are conducted in French, with nearly all of the teaching and school staff speaking just French.  The correspondence that comes home is also in French, and it can be a challenge (for the children and their parents alike) to understand all of that as well as the homework instructions.

Interestingly, the school adjustment so far has not been as difficult for our boys as I thought it might be in the beginning.  Sure, Saku keeps waiting to become fluent (he seems to think it will happen automatically--how many more weeks, mom?), and the school altered the boys' French class to a more appropriate level of FLE (français langue étrangère-French as a foreign language).  Yet, Jori says he is beginning to understand some bits at school, and both boys seem happy and connected to other kids.  In fact, much of the boys' positive adjustment seems to be the result of social experiences that are less dependent on specific language skills and more likely to come from pursuits in which the language is more universal, such as from music or sports.

I've described Jori's initial musical foray earlier (Pianos libres, see archives on the right) and while I have much more to add given our most recent adventures with the music conservatory, I'll focus here on Saku for whom the universal language of sport, especially of le football or le foot (soccer), has given him a huge opening into French society.  In our very first weeks here, we spent hours in the hot sun at the local stade (stadium), where Saku kicked his ball around, trying to train independently, while hoping for someone to show up for a pick-up game.  In early August, we saw mostly young men from the nearby military academy as well as adults.  One young father whom we see regularly now at the stadium, took turns shooting at the goal with his very young son and Saku one afternoon, while another day, Saku was invited to play in a pick-up game with guys twice as old as him because he happened to be the only person on the pitch with a decent football.  These same guys we've also seen around since then, at the local bars! 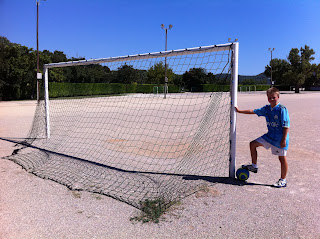 This week at school during the 2 hour lunch break, Saku tried first, unsuccessfully, to join some 5th graders (that would be the 7th graders in the U.S.) in a pick-up game, but then he managed to convince a group of 3rd graders (9th graders) to let him play, and in his rendition, he dribbled circles around them, earning their respect and gaining some bonjours in the school halls.  Not too bad!  Despite very little French language ability, he has been able to use the international language of sport to make some casual connections.

Saku is also making connections more formally through the local football club that he just joined.  We gave up on the Marseilles football club as the fit wasn't quite right and the distance is just too far away to manage with just one car in the family.  Finally, in mid-August, one of my emails to ASA, Association Sportive-Aixoise (http://www.foot-asa.com/ ) was answered.  I got Saku to the next few trainings of the U-13s (boys under 12 and 13 play in the same group), and then registered him for the club, for all of 150 Euros (!) and a whole dossier (file) of documents that I described in an earlier post (see Les documents).  Because Saku does not have a license yet to play football in France (who knew that 11 year olds have licenses that must be transferred from football federation to football federation?), he is playing for the third tier team at the moment, the Honneur-13 équipe (team), for a coach with whom we must use our fullest French language skills.  (The French texts and emails we exchange I'm sure are quite comical to him.)  We imagine Saku will be asked to play on pre-Excellency or the Excellency squads eventually, once his license is transferred or approved and he has proven himself (as his U.S. club coach has sagely suggested).  These are the top levels for youth in France.

For now, Saku is getting his foot on the ball twice a week, like at home, and he is adding some precision to the universal arm waving and hand signaling of football, by learning key French phrases with which to communicate on the pitch: montez (push up), hors-jeu (off sides), tirez, or simply shoot.  This is helping Saku's teammates open up to him and allowing him to exercise leadership skills from the very same positions he played on his beloved Emerald City Football Club team in Seattle, from center midfield and center defense.  His entraîneur (coach), teammates, and their parents have taken to shouting Carter! (Car-tehr, in a lovely French pronunciation) at pre-season games to laud him or encourage him.  The fact that he plays for ASA (pronounced ah-zah) has also gotten Saku attention.  Last week we were at Atelier Cezanne (Cezanne's studio in the last years of his life), exploring art, another subject in which specific language skills matter little, and the young man behind the gift shop counter was thrilled to meet someone playing for the club he himself played for just a few years prior.  Le foot is clearly a universal language and passion, and through it, Saku is finding a place for himself in this community, while the French language skills will surely follow.