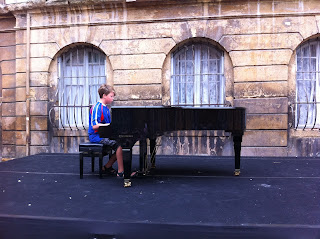 One way that sociologists think about the social world and our behavior in it is to see the social interactions all as a series of performances.  We perform according to the social roles we have in various contexts and based upon the cues we receive as we interact with others in those contexts.  Many social performances are subtle ones, that we perform as family members or friends, while some of the performances may be more obvious, like the ones I put on when I teach a course to students.  Each time I walk into a classroom or log on to my online course, I become a teacher, which comes with specific behavioral expectations and rules and expertise.  I create a performance and interact with my students in ways that are appropriate to the physical or virtual classroom environment.  My students also perform within the classroom context, as they are expected to engage with and master the information and ideas I teach them.

At the moment, our family is involved in many overt social performances daily, as foreigners with limited language skills, and the French around us react in all kinds of ways; some switch to English automatically, eagerly or grudgingly, others speak French more slowly, while yet others freeze up or roll their eyes and give up.  This past weekend, Jori took on several social roles that were new to him and that seemed to transcend his current identity as foreigner.  The first such social role came about because of a lovely music festival in Aix this past week (25. Aug.-3. Sept.) called Musique dans la rue (Music in the street). Just a short distance from our apartment, at a small, ancient square called Place d'Albertas, classical, jazz, and other kinds of musicians had been performing in the open, each night, in 30 minute slots.  They rotated to other locations throughout Aix in the same evening, and we caught a few amazing musical performances, just steps from our building's front door.  On Saturday, the 3rd of September, each of the locations had grand pianos set up for the public to use for free, Pianos Libre.  We cajoled Jori into performing at the square twice in the morning, and he played a piece he was learning in Seattle before we left, El Guitarrista de Linares ~ The Spanish Guitar, by W.T. Sky Garcia, to the utter amazement of the people passing by, and then, Clocks, by Coldplay. (See photo above, and some awkwardly filmed video by his inexperienced camera crew, on youtube:  http://www.youtube.com/watch?v=7KYKDumoOjQ . 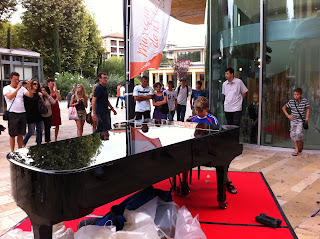 Later, as we were walking to our car to take care of some errands, we came across another piano at La Rotonde (near the famous old fountain), and Jori repeated with Clocks again (see below, and on youtube: http://www.youtube.com/watch?v=CC0ppIA4FCA ) .  He was so nervous each time, as he had never played in front of so many strangers before, but with a little encouragement (well, bribery), he did it.  Tourists and locals alike were photographing him, and one man said, 'Wow, he's just a junior high kid (un collégian)!'.  What an opportunity, to perform, in public, outdoors, both in an ancient square and in a main thoroughfare, with amazing acoustics, on a grand piano!  (Especially since he has not been able to get his hands on a keyboard for weeks.)  It was very exciting, and it gave Jori the opportunity to try on the social role of musician, or street musician.  It's something he's been thinking about since we moved here, as a way to earn some pocket money (!). Trying out the street musician role, he discovered that you need a broad repertoire and good composure.


Later in the day, Jori became a sought-after athletic prospect.  We attended a sports/activities fair just south of the center of town, to gather information about soccer, football, and swimming, natation, opportunities for the boys.  (I'll write later about our efforts to find a suitable football club for Saku.)  As we were making inquiries for Jori about the swim test for the swim team, a rugby coach approached us and asked if Jori might be interested in playing rugby for his U12-U13 team.  The coach was very intrigued by Jori's size.  We duly took the information about practices, and then attended the swimming tryout.  There, the water polo coach approached us for the same reason, to see if Jori might be interested in playing for him!  Jori, the athletic recruit, in his second new social role, will check out the rugby and swimming opportunities this week, to see which activity he will pursue.

Starting tomorrow, Jori will perform in his third new social role, along with his brother, as they become middle school students.  This social role is fraught with a bit of anxiety in the beginning, of course, as it would be for any new middle school student.  Middle school comes with new behavioral expectations (that is, performances) and even a new vocabulary, regardless of where the school is located.  In that sense, the experiences that Jori and Saku will have this week as new sixth graders at Collège Mignet are not going to be so different from those that their friends will have back home, as they too begin middle schools, in Seattle.  It will be interesting to compare notes.

Hope the boys have a great first day! All went well here.
I love the pianos on the street - and that Jori was brave enough to play!