The two Washington towns in which I have spent most of my life are quite young.  Seattle was established in 1869, and Hoquiam, the coastal logging town in which I grew up, was incorporated in 1890.  My birthtown, Helsinki, is considerably older, having been established in 1550, and I've always loved that I originally come from an old settlement.  Perhaps that was why I was so attracted to the old town of Tallinn, Estonia, for my dissertation fieldwork.  I was there about five years after Estonia regained its independence, and I wandered the streets of the beautiful Hanseatic old town daily (it dates from the 1200s).  I lived outside the historic city center, in a residential part of town that was both old and relatively young, with centuries-old wooden buildings interpersed with Soviet-era highrises from the 1940s and 50s.  Today, parts of Tallinn look much newer, even though I have not yet witnessed its metamorphosis into a truly contemporary European capital. 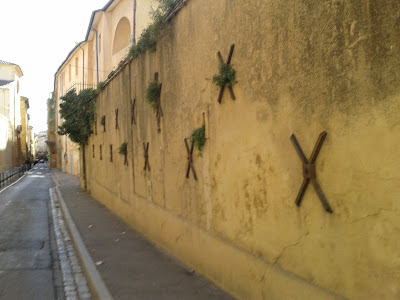 Luckily for me, moving to Aix gave me another opportunity to live in a really old city, with some Roman ruins sprinkled here and there, and lots of quaint old X's bracing walls, as in the photo above.  I describe our family's move to our current location in a post from last December (Emmenagement).  It's funny to think that the quartier (quarter) in which we live is in fact called the villeneuve (new town).  The villeneuve was built up from 1590 until the 1700's, as compared to la vieille ville, the 'old town', which dates back to the Roman period up until the 14th century.  This notion of new towns and old towns offers a wonderful example of how we construct different social meanings, sometimes for even the same words, depending on the time and place in which we live.  To the Aixois in 1600, our part of town was the new town, and it remains one of the younger parts of this old city, even though currently some very new construction is taking place just south of the city center.  On the other hand, if we want to talk about new towns in a more global sense, Seattle is definitely a villeneuve!

I'm currently pre-occupied with one other villeneuve and this one is not so much socially constructed as it is creatively constructed.  I mean that it is not a real town, but it's the name of a fictional town that is the subject of a French television series called Un village français (A French Village).  One can even visit the fake town virtually on the official website.  I learned about the series from my Finnish friend here whose family first followed the show on Finnish television.  (Not a single French person that I've asked knows the series, despite the fact that it features some well-regarded French actors.)  The series imagines the experiences of the French in their small towns during the Occupation in World War II, and the first season's episodes are each followed by some short historical reminiscences of actual French citizens who lived through the Occupation.  ("They were there...." says the caption under the title in the photograph below.)  I was able to purchase the boxed dvd set of seasons 1-4, thinking that I could improve my French comprehension by following engaging story lines, and learn about some French social history at the same time.  (I've just begun the second season and have discovered that I'm going to have to do some seriously listening because the subtitles suddenly end after the first season's dvds.)

So far, I understand that the Occupation brought about some significant changes in the relationships among the people in town and in the ways in which the town operated.  As a mirror for the French war experience, the series shows how all kinds of different private interests came to the fore as a result of the Occupation.  For some French, the urge to go on as before was strong but impossible to do fully, given the restrictions placed on ordinary activities.  New rules governing social activities forced some French to leave or lose their jobs, and others to adjust their diets, their daily movements and their hopes for the future.  Other French saw opportunities not only to survive but perhaps even to prosper, by cozying up to the Germans or by dabbling in the black market, perhaps even at the expense of their fellow neighbors (a point that has often been conveniently overlooked by the French until very recently).  And then there were those who saw the openings for other kinds of clandestine activities, on behalf of the French resistance or the latent communist movement.  As the series progresses, Villeneuve is becoming a new town because of the Occupation, and I suspect that when the series is over, the town will no longer look like or feel like the one in the opening episodes.  I suppose this is true of all human settlements; they are always in flux, but sometimes external forces, or violence, or new ideas, bring about change more quickly than at other times.  In some ways, this is exactly what I was thinking about in my last post about Marseille, a real French town that seems to be on the brink of something new (see Du Shit).
Posted by Unknown on Tuesday, September 25, 2012

Bonjour Madame Anne! This is Stephen, your old babysitter! I am writing from my office (in the all-girls high school where I am teaching English) in the mountains of JAPAN! It is especially exciting for me because I am living approximately 2 hours from where my great-grandmother was born! Furthermore, it is absolutely incredible to live in the country of my ancestors and to be a "himitsu gaijin" or secret foreigner, since I look Japanese but my brain is totally American!

Additionally, I am blown away by the ancient history of Japan, but I believe my town may be a "villeneuve"! There is a park near my apartment that occupies the grounds of a former castle that was built in 1532. While it is no longer standing, I am still struck by its history!

My sisters just shared your blog with me and I LOVE reading about your adventures and observations.
I hope you and your family are doing splendidly and I will continue to follow your blog with great anticipation!!! Take care!