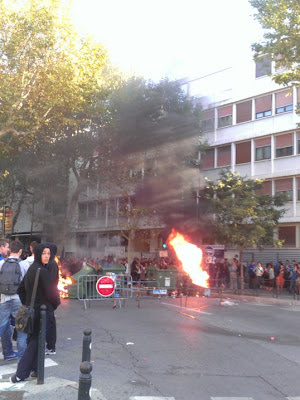 The French are well known for their grèves (strikes), and we've experienced a few strikes by teachers, airport personnel, and railroad workers, as they protest working conditions, or labor agreements, or salaries.  Manifestations (demonstrations) are also popular here, among students and the general public who march in the streets.  Today was a big day of manifestations it seems, as I noted that two of my regular radio stations FRANCE INTER and FRANCE INFO were going to go off the air for an hour this morning to protest salaries.  A solemn marche blanche (white march) was planned for today near Grenoble to raise awareness of the savage killing of two youth last week.  And, to my surprise, I came upon a local manifestation on the street in front of the nearby lycée (high school) in Aix this morning on my way to meet a friend.  Four garbage bins blocked the middle of the road, two were set on fire, while students chanted nearby.  Two buses were unable to move forward, and finally, the police followed, the fires were extinguished, students dispersed, and I continued on my way.  The friendly police municipale (local police as opposed to national police) re-directing traffic told me that it was a manifestation about 'planning'.  Further down the road, some of those students swarmed a local grocery store around another lycée to steal eggs and tomatoes to throw at police.  It seems that students at two schools coordinated their demonstrations over the dissatisfaction over les emplois du temps (class schedules) and summer vacations schedules. (See newsarticle here.)

Demonstrations and strikes are tools that social groups may use to try to bring attention to social grievances and hopefully effect some kind of social change.  Many times these activities capture the attention of the public or the media for a short time, but it is relatively rare that they alone will bring about definitive change because there are so many other factors that come into play.  The social conditions and political climate have to be receptive, the social groups need to be well-organized, financed, and connected, etc.  In France though, social protests via strikes and demonstrations are popular ways for the citizenry to express its discontents, given that French citizens do not have a great deal of power to change things through other means in this highly centralized state.  They vote for their President directly, unlike Americans, but they do not vote in many of those who represent them, such as the prefects who hold a great deal of power, and citizens can't challenge the constitutionality of laws here as they can in the U.S.  So, manifestations and grèves give the common French a voice, and on occasion, this is loud enough to spur changes by those who have the power.

Coincidentally, over the past few weeks, I have been engaged in a bit of a personal manifestation myself, also over class schedules (just like those high school students above).  The issue has been that some of the foreign students at my children's public school now have regular French class in addition to their French as a Foreign Language classes (8 hours per week, a hefty load!), and the latter classes conflict with other essential classes like math and history.  I duly attended the early school meetings introducing parents to teachers, wondering how to proceed with my concerns about missed classes.  I gingerly approached the English teacher who was outraged on our behalf (and we weren't the only unhappy ones).  She encouraged personal and collective action.  I was skeptical, because 1-I don't speak French well, 2-we are not French, 3-the French school system is very centralized, authoritarian, and feels relatively inflexible.  I used my strongest protest tool (not tomatoes or fire), and I wrote, with a little help, two letters, in French, which outlined our concerns directly, clearly, and concisely, and I emailed these directly to the principal, acting deputy principal and the teachers whose classes were affected by my kids' absences or troubles.  While I received prompt and supportive emails from four teachers, I heard exactly nothing from any administrative staff for two and half weeks.  In the meantime, other concerned parents began organizing a planning meeting tomorrow for some collective action.  Then, out of the blue, on this day of nation-wide manifestations, I received a phone call and had a brief face-to-face meeting with the deputy principal, and the foreign middle school students came home with new, improved (but not perfect) schedules.  All this time, the administrators were working on addressing our concerns, yet they never directly acknowledged this until now, after the fact.  That is the difference between me and the French I suppose, this directness, and I suppose I shall have to cap this effort with one more letter, thanking the administrators directly for their efforts.  In the meantime, there is discontent among the very students affected, as the new academic schedules are grueling to be sure, but the bigger problem appears to be that these schedules cramp the social schedules of the students in this household.  Already there have been some manifestations here protesting parental interference in academic affairs....
Posted by Anne Tuominen on Tuesday, October 02, 2012

Great, finally something happened with the school. I think I will also soon make my manifestation to the football club..