Who is barmy over what?

This week, an article in the NY Times suggested that Americans are sprinkling their speech with ever more British English phrases.  (See Americans are Barmy over Britishisms, by Alex Williams, Oct. 10, 2012.) The author attributes this in part to the coolness factor, that it's posh these days to sound British.  Also, we have more knowledge of the hippest British vernacular given the proliferation of media available on so many personal technology gadgets, and we mimic the expressions and fashions of American celebrities who have settled in Mother England.

I know another place where British things are posh, and that is in France.   Here, all the way down in the south, department and home furnishing stores peddle lamps and dishes and throws and knick-knacks with Union Jacks or pictures of British teapots or cute British phrases printed on them.  I know it's not the British ex-pats in town who are buying these up!  American symbols are also extremely popular here, especially on clothing.  In this regard, the Stars and Stripes trumps the Union Jack, I'm afraid.  I've seen more people wearing Stars and Stripes t-shirts here in Aix than I ever did in Seattle, and I've seen a few red-white-and-blue bikinis on sale in town and worn at the beach.  I have even seen U.S. flag scarves(!) wrapped carefully and elegantly around the graceful necks of older French women.  (I don't love this last fashion, but somehow the French seem to pull it off, as usual).  Anglophonia is popular here too, but limited mostly to the kind of vernacular one might pick up from American and/or British music videos, like the f-word that is spouted frequently around town by the younger set. 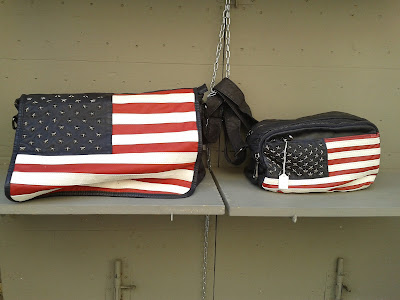 While I can't say for sure if Americana is equally popular in the British Isles, I am realizing that the popularity of Britishisms and British symbols is at least matched by the popularity of French symbols and expressions in Britain.  The effect on language is the most obvious, from my vantage point.  We certainly use French phrases here and there in U.S. writing, but the dropping of French expressions seems especially common in British writing (and I've been reading a lot of British authors lately).  This week I finished reading a serialized novel by the entertaining Scottish-Zimbabwean writer Alexander McCall Smith (44 Scotland Street, 2005) whose fictional portrayal of daily life in Scottish capital was quite interesting to me given my limited knowledge and I learned some new Britishisms although I wondered if these were in fact Scottishisms?  (Do you know what a coeval is?  Someone of the same age; we'd call them contemporaries in American English.)  I was struck by two other things: a discussion between two characters about how revered the Americans are in Scotland, because they are seen as a 'special race', and the many French bon mots (witticisms, literally good words, here I'm using this to refer to simply French phrases) sprinkled throughout the installments.  (Smith explains that one character liked to use French phrases, but I felt that the use of these began to extend even beyond just this character.)   I somehow did not expect to read such a sentiment about Americans nor did I expect to find so many French expressions in a Scottish novel.  Actually this is a bit silly of me, especially in regards to the latter; I often have to remind myself that here in France, my family really is relatively close to the British Isles (much closer than we've ever been), and the history of the countries and nations there, Scotland included, are inextricably linked to the French in ways that I have not adequately appreciated earlier.  In U.S. schools we learn about the ties between Britain and the U.S. which perhaps gives one a mistaken sense of the singular importance of the U.S. to Britain when in fact, the French have always been the ones right here, across a much smaller pond.  And, even though the world is much more accessible to more of us, thanks to a digital shrinking of the social and cultural,  if not the physical, distances, it's still physical proximity and history that perhaps matter the most.  A French college student can buy that cool Union Jack coffee mug in France, but even better, she can spend just a few hours actually going to Great Britain, and the French have been doing that for centuries.  (Remember William the Conqueror?)  And the Brits have been coming south for an equally long time, to enjoy French food, wine, culture, sandy beaches, etc.  Evidemment (obviously), it's not just the Americans who are barmy...
Posted by Anne Tuominen on Saturday, October 13, 2012