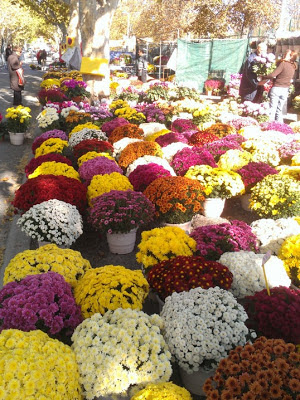 As I prepare for a new online sociology of religion course, I have been refining how I explain the different approaches to understanding religion and religiosity.  Because sociology is an empirical science, we can only interpret and make predictions about things which we can observe.  Yet, religion is based on faith, faith in unobservable thus untestable forces, such as sacred beings and supernatural forces, after-lives and human souls.  In sociology, we can't assess the actual existence of these 'religious truths', and this often upsets or confuses my students initially, particularly those who hold religious beliefs.  My job over the course of a quarter though is to show that while sociology can't speak to the veracity of religious beliefs, it does recognize that religion is a very real social force, one which gives deep meaning and purpose to many people.  Through sociology, we can see how religion unifies people, divides them, how it interacts with other social institutions like political and economic systems, and how it remains important, even in the face of scientific or other secular beliefs.

The conflicts and misunderstandings underlying different conceptions of life and our world are all around us.  I have just finished reading the remarkable story of the living HeLa cancer cells that were unknowingly contributed by a poor black woman back in the 1950's (see The Immortal Life of Henrietta Lacks, by Rebecca Skloot).  I am drawn to the vastly different ways the people in this story relate to the human body, particularly to the tissue taken from one particular body.  We learn how the doctors saw the living body as something to fix, something from which they could relatively harmlessly excise tissue in order to study it (and from which they did a second time after the body was no longer living).  The laboratory scientists and technologists tried to mimic the body by creating different kinds of culture media in which to try to grow and feed the cells in the excised tissue.  In the beginning, they also sometimes transported the living cells in tubes carried in pockets near their own bodies.  The tissue itself seemed distant from the body from which it came, until one lab worker noticed the painted toenails on the body during the autopsy and poignantly recognized that the collected tissues had come from a real person.  Eventually, the propagating cells from the tissue became a wildly successful commercial product, one which unfortunately did not benefit the descendants of Ms. Lacks.  To her family, the living tissue was confusing, in part because of their deep religious beliefs; was Henrietta alive, could she be brought back to life, could she be cloned, where was her soul or her spirit if part of her body was still alive?  There was a great deal of disconnect between what the Lacks' family understood and believed, and what the researchers and their staffs did.  In part, such different understandings reflect how deeply rooted questions of faith can be, whether the faith is in science or religion or even in the market, and how difficult it can be to find common ground.

In France, conflicts between religious and other views bubble up here and there.  A secular state such as this one officially and publicly has no place for religion, and any overtly religious expression is not allowed in public settings.  As of 2011, this applies to the wearing of the burka by Muslim women.   To French women who do wear the burka, the prohibition is untenable because it forces them to go against their deepest beliefs, and so we continue to see misunderstandings between secular and religious interpretations (see French police injured in row over burka, by Henry Samuel, The Telegraph, July 26, 2012).  On the other hand, the French have been able to marry other religious elements into their secular society to some degree without too much conflict.  I have pointed out earlier how Catholic religious holidays and rituals remain important calendrical markers (for example, see Encadrement).  Coincidentally, it's La Toussaint (All-Saints or All-Souls Day) again, a convenient date on the religious calendar around which to schedule a secular two week school holiday and bank holiday.  Yet there must be some lingering religious meaning to this time of year too, judging from the persistent and popular ritual of visiting cemeteries and family burial plots to leave potfuls of mums.  (I first noticed this ritual last year, see Un week-end champignons.)  Do the French believe in les âmes des vivants et des morts (the souls of the living and the dead), like the family of Henrietta Lacks that I mentioned above?  Maybe, maybe not.  One can certainly follow rituals without attributing any religious meaning to them, and the meaning of the ritual can shift to take on less religious undertones.  It may be that it just feels good or right to remember one's ancestors, to sweep off their gravestones, and to leave huge pots of chrysanthemums in mid-autumn, without attributing any of this to a belief in these ancestors' souls.  (The photos here show the special flower market adjacent to Cimetière St. Pierre in Aix, and burial plots within the cemetery adorned with fresh pots of flowers.)  The point is that religion remains salient, whether we are in 21st century secular France, or in the acclaimed hospitals and centers of scientific research of the past century and today.  Even when religion seems overshadowed by medical advances, secular laws, and empirically based discoveries, the influence of religious traditions and the persistence of religious beliefs and behaviors show us that religion remains a potent social force, one that helps many people interpret their world and their place in it. 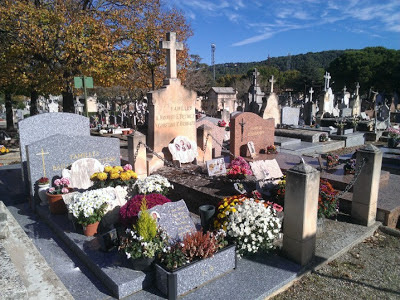