After nearly 17 months, my family spent the week after Christmas among other English-speakers in an English-speaking country.  What a relief to finally be seen as somewhat intelligent, to be able to make small talk or polite talk with some confidence and understanding.  (Today, I was back to being unable to do any of that, with neither the sales clerk at Monoprix nor the woman taking my order at Bechard's pastry shop!) 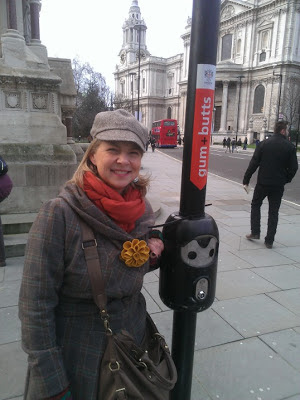 However, language, even if shared or widely spoken, is not static nor is it unrelated to the culture in which it exists.  Britishisms are popular in the U.S. these days (I wrote about them briefly in Who is barmy over what? October 2012), but we still had our moments in London where we had to think twice, just like the French have to do when visiting Switzerland or Belgium or parts of Africa.  London signs noting "subway" do not lead to subway trains as we know them in the U.S., but to subterranean paths under a road to the other side.  We didn't mind "minding the gaps" and doors of the Tube once we got to the real Underground, because we could at least understand what was being said.  Our Beefeater guide at the Tower of London on the other hand was incomprehensible at times!

The British use English and speak of topics in ways that seem especially bold, direct, almost irreverent to our ears and eyes, and that too is cultural.  They aren't shy about telling you where to put your trash, gum and cigarette butts, for example.  (I wonder if such direct language might work better in France too where generally things are much more polite or even unaddressed, but where the current approaches to dealing with the dirty business of little French dogs or the ubiquitous cigarette butts obviously don't work well.  Why not try it? La poubelle est ICI-the garbage can is here!)  In regards to other kinds of butts, we were directed by acquaintances and guidebooks to check out the knickers and pants at Marks and Spencer, and we are now well-supplied in the underwear department.  And in stocking up on English-language reading material at Waterstone's bookstore, I found one of the past year's most popular British books, the feminist-memoir, How To Be A Woman by Caitlin Moran.  Her English is as lively, in-your-face, and 'skanky' as the stories she tells of coming of age in post-modern England.

On the other hand, direct or no, there are some less comprehensible customs and language usages in Britain that leave us shaking our heads (just as there are in France, the United States, in every society in fact).  I wondered about the labeling of trains within the Tube stations; these are either east- or west-bound (instead of consistently being labeled by their ending destination as they are in Paris), but it seems that some are actually traveling more northerly or southerly.  How to decide which one to get on, if you are in a hurry?  On another transportation point, having just mastered 'French driving', I found myself wondering, strictly hypothetically, would I be able to repeat that feat in another country...where the driving takes place on the left side of the road but on the right side of the car?  Wouldn't it just be easier, for drivers and pedestrians alike, native and foreign, to have everyone always look to the right then left, rather than having to tell people over and over that in fact, you have to look left at this crossing, and right at that one? 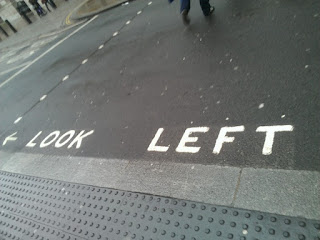 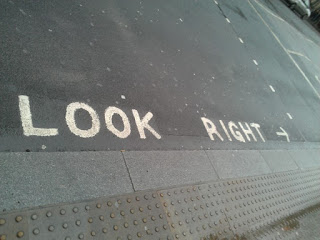 So great holiday you had! And all the shopping, I`m jealous..