At the end of January, we will have been in Provence, and in France, for 6 months.  You might be wondering how our French is coming along.  From the start of school in early September, both the boys, and Allen and I, have had des leçons françaises (some French lessons), the boys at school, and Allen and I privately, at our home.  The boys were put into a special beginning French for foreigners class with just a few other students, and while they may have felt that progress was slow initially, at les réunions de parents d'élèves (parent-teacher conferences) in December, their French teacher seemed pleased with their progress (at least that's what I understood as the conference itself was in French!).  This week both boys remarked that they feel they have made a huge amount of progress in understanding French.  Some subjects, such as SVT~sciences de la vie et de la terre (biology and earth sciences) remain difficult, even for the native speakers, and some teachers are a bit more willing to make accommodations than others to beginning French speakers.  Overall, the school has been quite supportive of our boys, and what the boys learn there is being reinforced by the opportunities to speak and hear French elsewhere.  They can order meals for themselves, as they did today at burger joint with some friends after their early Friday dismissal, they can get themselves to and from their sports trainings, and they bring new phrases home to share over the dinner table: c'est pas grave (it's no big deal, or it's not serious), or ça veut dire quoi? (what does that mean?).


As for Allen and me, we are putt-putting along with our twice a week lessons at home with our French professor.  With her, we focus on dialogues in our French book, or we discuss a current event or something in our lives (like apartment-hunting or ultrasound terms), building our vocabularies and grammatical skills.  Thanks to what we have learned, we are now able to arrange occasional rides to the boys' games or tournaments with French families, buy some major appliances and arrange delivery to our apartment, order food, like a 4-kilo turkey for Christmas, from the local butcher, and renew Allen's residency card at the sous-prefecture.  I am pleased that I can now understand the automated voice commands on my mobile phone well enough to delete old messages!  Most telephone transactions remain difficult though, so I relied on a native French speaking friend to set up the utilities in our new apartment, and Allen's co-workers have also helped.  Because of his work, Allen has more opportunities to speak and hear French than I do, although English is spoken quite a bit at the office.  His French comes with a German accent (he spent 6 months in Germany as an exchange student in high school and speaks German well).  If you've read any of the French Tintin comic books in translation, Allen sounds like one of the Teutonic villains in Tintin's adventures, all of whom pronounce the soft French cee sounds as zee's. 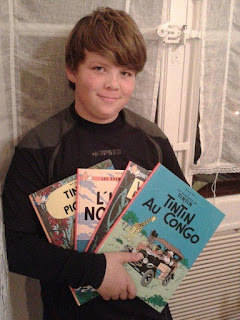 We haven't yet seen the new film, but the comic books, in the original French, comprise Jori's and my new favorite French reading material.  We can actually read and understand the stories, and for me, I appreciate the reinforcement of the relative pronouns or an imperative verb form that I have just learned (although it took a French friend to point out to me that Tintin is pronounced tan-tan in French, not tin-tin like we say in English!)


Going back to the German, I am finally at the point where my French vocabulary is big enough that when I'm searching for a word, I'm no longer thinking of the German equivalent, as I was when we first came in August.  In fact, a bittersweet thing has happened in that my German, which I studied in high school and at university for six years, is being replaced by French.  I have realized this over the past few months as I have had the opportunity to speak German with a soccer parent originally from Strasbourg, and a local wine salesman from Düsseldorf, and each time I meet either of them, I find myself tongue-tied, saying oui instead of ja (yes) and mais instead of aber (but), and fewer and fewer words in German come to me.  It's an interesting phenomenon because while the German is being undermined, my Finnish does not feel at all impaired.  Linguists have long noted that children and adults acquire second languages differently, and UW neuroscientists who study language acquisition suggest that second language learning early in life may affect the brain's flexibility in how it learns and uses languages and perhaps even stores them  (see for example, http://www.washington.edu/news/articles/bilingual-babies2019-vocabulary-linked-to-early-brain-differentiation).  Perhaps languages learned in early childhood, such as my Finnish, occupy a different part of the brain or are accessed differently, than languages acquired later in life, as German was for me.  If so, that space where the German is or was in my brain isn't very large or deep, as I seem to have quickly cleared it out for the language I need at my disposal the most right now.  That said, my bigger issue is having enough opportunities to speak a more sophisticated French.  Because I work at home, spending many hours each morning online working in English, I supplement my lessons at home with a weekly or bi-weekly episode of Coffee Break French (see http://radiolingua.com/shows/french/coffee-break-french/ ) or I listen to French radio while I chop vegetables or wash dishes, and I read the French papers online as much as I am able.  I am comfortable with and rather enjoy taking care of business with emails or sms-messages in French, but speaking and understanding spoken French is really where I need to improve.  Most days, the only spoken French I typically exchange is with vendors or shopkeepers, or sports coaches.   It's not terribly conducive to getting my French to the next level, as I'm ready to move on from passé composé (present perfect tense) and to be able to say more than avez-vous la coriandre aujourd'hui? (do you have any cilantro today?).  I'm also quite motivated to stay ahead of my kids, so I'm thinking about how to accelerate my language learning.

All in all, our language situation at this point, almost six months in, c'est bon (it's good).  We're managing fine, and for me anyway, I am quite inspired by the non-native French speakers around us who have mastered enough of the language to be able to manage more complex transactions (like setting up their own utilities or completing French tax returns?!), and by my children's progress.  Most of all, I am especially grateful to our French friends who include us in social occasions where we can experience French in its most natural settings, as it is spoken among family members over meals, or among friends celebrating events like fête du rois (Epiphany) last weekend.  Those are the places for real language learning.
Posted by Anne Tuominen on Friday, January 13, 2012

Greetings! When I started learning Spanish, my high school French got in the way. Now I never even know if a word is in French or Spanish at times, if I hear it independently.
Glad yours is coming along so well - and I'll be VERY impressed if you can actually keep ahead of your boys!!
Wedgwood got some snow today - but we are at Hood Canal, so missed it.

Love your blog Anne! The boys seem to be doing great and you look amazing! Keep updating on the vegan diet! Was thinking of you over the holidays and though late, will send a belated New Year card your way. Hana is nearly 2 and busy as ever! Sending hugs,