Astonishingly, since we moved to Aix in August, I have been stopped on the street at least a half dozen times and asked for directions, to this sight or that market.  I think it's because I seem to look like I know my way around the centre-ville (town center), as it certainly isn't because I look French with my blond hair and Nordic features or because I speak the language so beautifully!  Because I'm the main food shopper in the family, and because we live just steps away from two marchés (open-air markets), several charcuteries (delicatessens) and grocers, and many, many restaurants, one does quickly learn one's way around with the help of such food-based landmarks.  By now, I also definitely have my favorite food vendors and lunch spots.  On the other hand, there are still many culinary offerings to discover in our town, so our family's new year's resolutions this year involve la nourriture (food).

The first resolution is inspired by my spouse's recent trial of un régime végétalien (a vegan diet) recommended by his sister.  For the past 21 days or so, Allen has eaten a mostly vegan diet (no meat, dairy, eggs) which is quite a challenge in France where meat, butter and eggs are important elements of most meals.  Even my vegetarian friend who eats dairy, but no meat, poultry or fish, finds limited dining options for végétariens (vegetariens) in Aix, this despite the amazing proliferation of vegetables at the markets at all times of the year.  So, Allen has been cooking at home quite a bit the past few weeks, with the tofu and tahini we found at Asian and Eastern food specialty shops, filling our refrigerator with little containers of homemade hummus, refried beans and left-over rice and Thai curries with tofu. 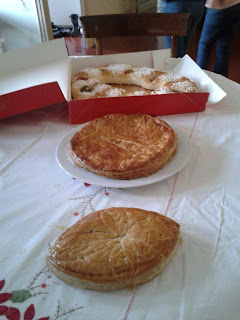 Because of Epiphany, a few exceptions to the diet have been made for les galettes des rois and les gâteaux des rois (two versions of the Kings' cake exist here in the south, the more traditional butter-laden galette version with frangipane of almond paste or calissons, two of which appear in the photo's foreground, and the egg-laden brioche-like gateau version special to the south of France, shown in the red box).  Both versions are definitely not vegan, but they are traditionally eaten all month long at parties or at home, and so we have not bypassed any opportunity to enjoy these cakes (all in the name of extending our cultural experiences, n'est-ce pas?, right?).  And now, the initial 21-day diet has passed, with moderate success, and my spouse has resolved to continue, with some modifications (allowing eggs and small portions of meat here and there).  In turn, I've resolved to experiment more with the bountiful produce at the markets.  Last night we tried endives (endives, but pronounced on-deev) that are omnipresent at the markets and seem to end up in everyone's baskets except mine (they look like oblong cabbages or pale hearts of romaine lettuce).  These were braised with apples and grapes (à la Dorie Greenspan, Around My French Table) and served aside baked chicken.  Later in the week we'll try a vegetarian soupe aux lentilles (lentil soup), the pork-filled version which is a very common winter food in France, and then I plan to experiment with les poireaux (leeks), another popular market vegetable right now. Our second resolution is actually to eat out more!  Since we are living closer to the center of a town than ever before, we've resolved to take advantage of this more concretely, by going out once a weekend, on foot, sans enfants (without the kids, although the kids can come to any bar here).  The past two weekends, Allen and I have tried two different bars à vin (wine bars), one of which was a little 'young' for us (remember, Aix is a college town) and offered indifferent service, and the second of which included an elaborate discussion and presentation of our selected wine by the owner.  We were asked if we had already eaten (we had) and then our first choice of wine was rejected as too rich for the digestion that was taking place in our stomachs.  A very small glass of the wine we ended up with (from the Domaine des Cantarelles, a winery in Nîmes) was first poured into a carafe and swirled all around to coat the inside walls, and then returned to the glass.  An aerator with multiple feet was placed in the neck of the carafe, and the wine was decanted from the bottle through the aerator so that it flowed down its feet and then down the inside walls of the carafe.  Then the wine was poured from the carafe into our glasses and swirled before we were allowed to taste.  After some discussion, we and the proprietor all pronounced the wine souple (supple).

Because many new year's resolutions are anything but supple, they are easily broken.  I am hoping since ours are based on food, something everyone needs and that is plentiful here in Aix, in various forms, we will be able to stick with the resolutions and in return, really get to know our town and its inhabitants.  Maybe someday soon I'll actually be able to tell someone confidently on the street, (if not in beautiful French!), that the fountain she seeks is sur la prochaine rue (on the next street), or better yet, that she'll find a really great restaurant or some beautiful lettuce tout droit (straight ahead)!
Posted by Anne Tuominen on Monday, January 23, 2012