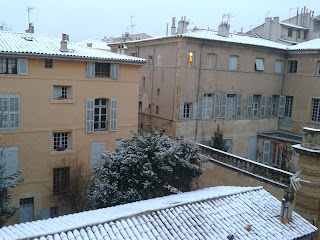 Such a pretty sight to wake up to this morning, a proper dose of l'hiver (winter) in Provence.  All week the low temperatures will be below freezing, and we'll have some of the gray clouds and familiar damp coldness that I seem to prefer in winter (perhaps because for me it balances the energetic brightness and heat of summer?).  I felt downright buoyant wheeling my jaunty, yellow shopping cart through the wet snow/rain.  The pretty snow scenes we could see from our 4th floor apartment were replaced at the ground level by wet pavements and little patches of la neige (snow) on parked cars and on sills. The Tuesday marché (open-air market) in Aix was sparse, with few shoppers and fewer vendors than normal.  The poor fish guy was cutting into an Atlantic salmon with cold, red hands, and my regular fruit vendor was so bundled up, I had to get close to make sure it was his stall.

I skipped along until a phone call from my children, at school, jarred me.  They begged me to come get them early as they claimed to be just freezing at school.  Not only were they among the few in school, as the collège (middle school) draws from a broad geographical area, including kids who live in the no doubt snowier campagne (countryside), the kids who were at school were cold as their customary breaks between classes were taking place outside in the schoolyard, with the temperatures hovering near freezing.  It seemed strange to me that the school would not have made some accommodations to allow the kids to stay inside on a rare snowy and cold day, especially with fewer of them in school anyway.  In many ways, the school rules and protocols are confusing here, on the one hand quite strict, yet loose on the other. 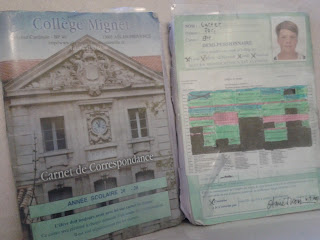 To enter and exit school each day, the kids must show their Carnet de Correspondance, a booklet that contains their photo i.d. on the back, their schedule, pre-printed permission slips for parents and school officials to sign, the school handbook and rules, and a section for the teachers to send written notes to parents.  If the schedule that is taped to the back says a kid has class at a given time, then s/he cannot leave the school, unless the parents have signed the correct slip and the Vie Scolaire has okayed it by a certain time in the morning.  (Vie Scolaire is the staff or section that handles the absences, tardies and sanctions at school--the office of School Life?).  The photo here shows the front of Saku's carnet, and the back of Jori's, which has his photo, his schedule, and my signature which allows early dismissals in some cases, but not apparently all.  On every other Friday, half of my children's library sciences class does not meet, so I have to sign the purple slip excusing the boys from school lunch so they can leave early and not sit through an empty period at the end of the day.  If they were to stay in to eat lunch (my preference), they have to stay on the school grounds until 13h50 (1:50 pm) according to the rule printed in the carnet (the reason for which is not however clearly explained).

When there are circumstances such as we have this week at school, we have to pay close attention to the boys' daily schedule (which changes each day) and make sure we are signing the correct slips if we want to excuse them.  This week, both International Section teachers are chaperoning a class trip to England for the cinquièmes (7th graders, but called 5th graders, in France), so the English and History/Geography classes are not in session.  For the boys to leave early yesterday, yet eat lunch, I had to sign a slip for early dismissal (and I actually signed the wrong one, as the purple one meant they weren't supposed to stay for lunch...Their classmates were outraged that the boys were able to eat lunch yet skip out early too!)  Yet for the boys to enter school late tomorrow, apparently I don't have to sign the pink absence slip, nor the green late arrival slip because they aren't arriving late for a class, just later for school because of their cancelled English and History/Geography classes.  To add to the confusion, this morning we had the uncertainty presented by the snow (no notice on the school website announced the school opening or closure), AND the P.E. teacher was purportedly going to be on strike so I signed the pink absence slip for the first two hours when P.E. would have taken place.  It turned out the boys didn't need to show it.  We've experienced several teachers grèves (strikes), but not all teachers seem to strike at the same time or the same days, nor are we informed officially so I'm never quite sure when to excuse my kids early or to send them late or which slips to sign.  There are no substitute teachers here, or at least not for temporary absences.  If a teacher is out sick or on strike for a class in the middle of the day, the kids just have to spend a school period in study hall or outside waiting for their next class.  Sometimes, they even have to eat a less than stellar lunch as they did a few weeks ago, when the cooks and staff at the cantine (cafeteria) were on strike.

So, this afternoon, I went to school at 13h50 to excuse the boys in person (since I hadn't signed any slips beforehand and we hadn't realized how cold and empty school would be, or that their last class would be study hall).  Inexplicably, the boys had just been let out by the usually hyper-vigilant staff (apparently the boys were able to convincingly make their case without my signature).  The staff person manning the door was able to figure out which kids were mine and tell me that yes, the jumeaux (the twins) had been let out.  And this is how I found those boys, walking home from school early, along the wet, cold streets of Aix.... 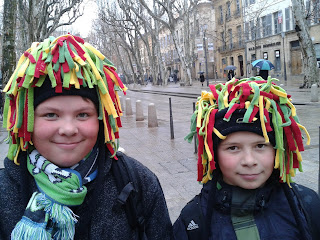