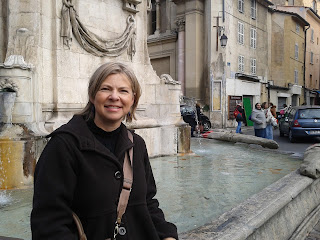 In this first week of January and the beginning of a new academic quarter, I present to my introductory sociology students the idea that the social meanings of things, experiences, and interactions vary, depending on the social context in which we find them.  This context depends on both time and place.  I use several substances to demonstrate how social meanings shift in different social contexts, one of which is water.  (The other is saliva, but I'll reserve that example for the classroom!)  I suggest that water, even though it is an essential substance for human existence, can mean different things, to different social groups, in different places, in different times.  For centuries, water, that is, holy water, has cleansed the spirits of Christians, while in agriculturally-dependent communities all over the world, water has been sacred because of its economic significance.  In contrast, in one particular West Virginia town, water is poison, the source of many ills, something to be avoided.  (See http://www.nytimes.com/2009/09/13/us/13water.html?pagewanted=all ).  Understanding the differences in how social beings see and interpret water or any other aspect of our world is one of the first steps in achieving what we call the 'sociological imagination,' or that sociologically way of seeing the world. 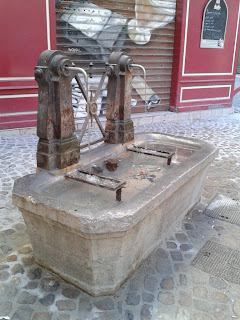 Here's what we've noticed about de l'eau (water) in Aix, a town that has variously been described as a town of water; long ago, it was a town of Roman baths, and today, there are many fountains throughout town dating from later times.  The four along the main boulevard alone, (the biggest and dare I say, gaudiest, being La Rotonde), are evocatively described by American M.F.K. Fisher in her memoir Map of Another Town (1964).  Pictured here are two others: above, the one near our apartment on Place des Prêcheurs, and a second one at the north end of Rue Mignet.  These, and the occasional faucets one finds, are well-used especially in the spring and summer, by locals and tourists wiping their faces, getting their feet wet, chilling wine bottles.  I wouldn't drink from them, some are quite mossy, but I've read you can.  In Fisher's account, the waters were seen as curative, offering potentially purgative and other effects.  (I say, let's avoid drinking that water, especially today, as our family is in the grips of une grippe intestinale, a stomach bug, and there is no need for additional purging).  The water supply in general though is apparently pretty good and plentiful, and Allen heard there are two local water companies, one of which is better than the other.  I don't know which one we have, but we like the water in our new apartment although it too tastes more mineral-y than what we are used to.  All of the water in town seems to leaves mineral spots, so we have to use a special decalcifying cleanser if we want to get rid of the spotty effect in the tub or shower stall.

Commercial water is sold widely here, in those ubiquitous water bottles, and we carried water everywhere with us in reusable water bottles last summer.  Interestingly, the practice at sports' trainings here is for athletes to drink from a collective water spigot rather than to bring water bottles, and at our boys' soccer and rugby matches, each team has a basket of 10-12 water bottles that are carried to the sidelines by the coaches to be shared by the team members.  I strongly encourage my kids bring their own Camel-bak water bottles to practices at least, and I do see that a few French kids come with their own, but most do not, not even the men who come to the fields for pick-up games.


As for water sports, swimming is popular and is even part of the middle school physical education curriculum (our boys have suggested that French kids are good swimmers).  There are several public swimming pools in Aix, and the one nearest us is cold and deep (it's used for water polo), and it has a retractable roof for those many hot days.  There are many private pools in Aix, mostly outside of the old town, and in the surrounding neighborhoods where houses, and thus yards, are more common.  (I've looked, with the help of Google Earth.)  We city dwellers rely on the public pool, or we trek to the Mediterranean beaches (about 45-60 minutes away), for sublime dips into the sea and picnic dinners as dusk approaches but the heat persists.  Due to the astonishingly mild winter here, we even spent this past Boxing Day at une Xmas Beach party at St. Croix, even though none of us went swimming. 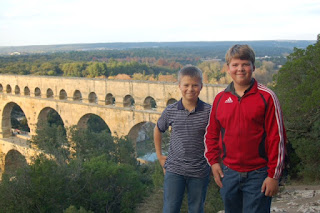 Water as a source of leisure takes us back to those Romans, for whom water was vitally important economically but also conferred social status.  Ruins from the Romans' big water projects are visible throughout Provence and the south, the grandest being the Pont du Gard aqueduct which provided water to the town of Nimes (that's Saku and Jori in November 2011, after we walked up one of the trails so we could look into the top of the aqueduct).  At the museum sited near this ancient water works, we learn not only how the aqueducts worked, but also how access to water was a sign of social prestige in Roman times, and how this access was achieved by exploiting human labor.  The exhibit suggests that the water usage by the upper classes was often quite profligate.  The small remaining trace of the Roman baths in Aix too reminds us that water was once truly a luxury item, reserved for the rich, supplied by the poor.  Sometimes, in our quest to see how social meanings shift, we also see the uglier qualities of human society, many of which never change.
Posted by Anne Tuominen on Wednesday, January 04, 2012