In recent months, an English friend and I have been exchanging examples of what we find to be amusingly vague artistic descriptions of French cultural events and performances, particularly as we've come across them in regards to the Marseille Year of Culture.  (You can find out more about this Year of Culture's happenings at www.aixcentric.com.)  My latest find is from the website of the French performance company that put on a huge spectacle (performance or show) in Aix last Saturday night.  The professional company Transe Express describes itself as inventors of imagination:

Transe Express play in open spaces to provoke the meeting of a public. Without limitation, the artistic mediums and modes of expression are the ingredients for our creators. Music, visual arts, prouesses, circus skills, fire, literature, metallurgy, opera, rock, dance, with a preference for theatre, found at the corner of each of our philosophical stones. Shock creations which at times invest a stage, non-conventional spaces but principally the streets ; Intriguing the public in their everyday lives ; Unique adventures to transform a city, to «dress» a strong moment of an era. The team is constituted of a hundred actors, aerobats, acrobats, bell ringers, dancers, percussionists, singers, string quartets, welders, technicians, forgers and others that make up the motley crew who regularly realises the project of the Company : Ephemeral creations or repertoire shows, close proximity, aerial or ambulating spectacles.
( see more, http://www.transe-express.com/en/company)

No, this isn't a bungled translation from French; it's meant to sound like this, and I've read many equally and strangely vague descriptions in French.  In a way, the language reflected the show we saw, which was really amazing, but also really hard to describe precisely.  (We've had other similar experiences last summer, see Les spectacles, July 2012).  This time, along the main boulevards in town, we saw floats of giant human dolls singing in opera-rock falsettos, acrobats playing the drums with their bodies, and giant mobiles of human musicians swaying under construction cranes in the night sky. 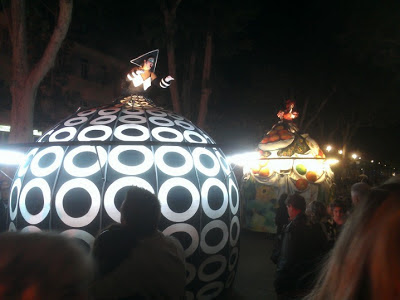 All of this floatiness, in how some French express themselves in words and actions is perhaps related to something else I only just realized concretely about the French language, and that is that French is not a phonetic language.  The precise sounds and pronunciations (and sometimes spellings) that I use as my guides, especially as these come from Finnish and even from German, should really be forgotten when it comes to pronouncing and trying to understand spoken French.  I took an illuminating course on la phonétique française (French phonetics) this year in which I learned rules about the sounds French words make.  One learns about the sounds themselves by learning how to use the lip and tongue in slightly different combinations, and then these sounds correspond to so many different spellings that it's hard to keep everything straight.  I don't have them down well yet, but I do better understand that I can swallow quite a number of letters in many words.  For example, for non, nom, n'ont (no, name, don't have), I can just drop the last letters when speaking, or I should listen really, really carefully to the context because these are all pronounced exactly the same (approximately: noh).  It all feels very loose and imprecise.  I even get tripped up on phrases that aren't homophones as there are plenty of rhyming sounds in French that can also trick unsuspecting listeners.  How about the radio story last week about the anti-gay marriage protests which were led by what sounded like Brigitte Bardot?  I thought her thing was animal rights?  In fact, yes, she is the former French hottie-turned animal rights activist, and it's a woman named Frigide Barjot, who is involved in the anti-gay rights protests...who has taken on this name as a pun on Mme Bardot's name, amusing herself and also obviously confusing foreigners trying to get a handle on French!  Here's what I think: maybe the lack of phonetics in French, all the many different spellings that come with the same sounds or almost similar sounds that change just a bit with little changes in one's lip and tongue positions, maybe all this looseness is somehow related to the floaty, ephemeral, gauzy, non-conventional, limitless fashions in which the French language mirrors and paints pictures in the sky, of adventures and breathtaking spectacles which capture our collective philosophical imaginations...?
Posted by Anne Tuominen on Monday, June 03, 2013

At least, once you see a written word you will know how to pronounce it. In English, there are multiple pronunciation possibilities (e.g. lead, house but rouse, get but gent etc). French is not phonetic and one has to know grammar and the roots of words to correctly spell it.
Pascale