Spectacle is one of those French words that has a slightly different connotation when interpreted by an English-speaker.  Spectacle is pronounced spek-tahk in French, and it refers simply to shows or performances; my French friend described her young daughters' end-of-the-year dance recitals as spectacles, but we've heard the word used to refer to all kinds of shows, such as a fireworks displays, musical performances, and it was even used to refer to the opening ceremony at the soccer tournament I mentioned in my last post, Une semaine en Espagne.  For me, and I think for many Anglophones, the word, especially as it is pronounced in French, signifies something really grand and amazing, along the lines of the English word 'spectacular' (used as a noun, e.g. a circus spectacular).  As a result of this interpretation, we've had some pretty high expectations of spectacles.  Yet, as often happens when one tries to translate words and ideas from one language to another, sometimes something is lost in translation.  Some of the spectacles we've seen in the past week have left us scratching our heads a bit.

As a treat for us and our Seattle visitors this past week, I searched for tickets to some spectacle that would allow us to enjoy a musical or arts performance outdoors on a warm Provençal evening (but that would not set us back 200+ euros per ticket, as that was all that was available for Aix's world-renowned Festival international d'art lyrique opera festival that was happening at the same time).  What I found was a show that was described as including modern dance, classical music, and mirrors and illusions, and that was free to children under age 12.  It sounded magical, engaging, and family-friendly so I even invited another family to join our group.  We expected to sit on the grass on our own blankets at a lovely city park, in front of a big stage, listening to loud and lively music and watching lots of dancing and pretty costumes, lights, and perhaps magic tricks with mirrors. Instead, we found ourselves in one corner of the park near a small stage, with not enough folding chairs for the crowd, and a hostess who spoke to the audience in French without any voice amplification.  Most of us could not hear a thing she said (and some of us would not have understood anyway), and she refused to repeat herself to the back of the audience when someone asked her.  Then, four simply-dressed performers came out and presented a dramatic and stark modern dance interpretation of Shakespeare-influenced stories, with a spare musical accompaniment provided by a sole cellist (and with the ambient noise of traffic racing by on the other side of the stone fence).  The mirrors were little foil-covered decorations fluttering from the trees towards the back of the stage, and the magic and illusions were all metaphorical.  A French mother left partway through with her young children in tow, obviously not finding the performance to be quite as billed, and our own children and we squirmed, we stifled giggles, and somehow, we endured what I would call a spectacle that was very French, and a bit weird.  We did appreciate the skill and artistry of the dancers and the symbolism of their modern dance, but I'm not sure we quite understood the illusions that were supposed to reveal truths, or the copious applause and bowing afterwards.  The rest of the audience seemed very impressed, and the performance clearly met or surpassed their expectations. 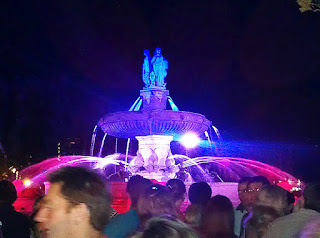 Two evenings later, La Fête Nationale (French national day, or Bastille Day as Anglophones call it) was upon us.  While the customary fireworks display in town was not going to happen (due to too many wind-related cancellations over the years), the Aixois were going to celebrate the day with an evening lighting spectacle at the Rotonde fountain called Les lumières du 14 juillet, and a bal (street dance) along the main boulevard.  We arrived at 10 pm to see a 10-15 minute LED light display on the fountain set to recordings of popular classical music selections.  The lights were pretty and the show was apparently the first of its kind in France (see the Aix mayor's bimonthly publication "aixendialogue" no. 55, Juillet/Aout 2012, p. 10), but it did not quite live up to its billing.  To us, the lights were not as spectacular as real fireworks or even as light shows we've seen elsewhere.  The show was rather anti-climactic actually, as it was then repeated several times so that everyone could see. 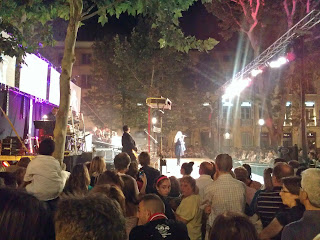 We then turned to make our way toward the stage set up at le haut du cours (the top of the boulevard) where we were surprised by an entertaining and well-rehearsed song and dance show performed by a talented group of saxophone and horn players, a keyboardist, a guitarist, a troupe of professional dancers, and four singers.  The crowd was so unexpectedly thick that we couldn't dance or even see the stage except from the side.  We were most amazed by the musical selections that were being performed on this night of French national day: the program was almost entirely made up of American show tunes, from Westside Story, the Wizard of Oz, New York, New York, Hair and others!  (Songs by Abba were the sole exception that I noticed.)  The show was joyful and fun, and I could hear the French all around me singing along with the performers to the songs from Grease.  But it was, again, another spectacle that turned out to be not at all what we expected, this time because the musical choices did not seem congruent with a celebration of French nationhood.  Actually, the more I think about it, the more I realize that surprise is probably a key element of the word spectacle, the idea that what one is about to see is going to surprise in some way.  As we've discovered, sometimes the surprises are positive, sometimes not.  In many ways, this sums up our nearly year long stay in France so far; like the spectacles of the past week, we continue to be surprised by what we are experiencing here.
Posted by Anne Tuominen on Tuesday, July 17, 2012