My kids participated in a stage last week in Aix.  (Stage can be translated as an internship or a training camp; here, I'd say it translates best as a day camp.)  Day camp experiences are nothing new for my urban, millenial kids whose summer times are way more structured than mine ever were.  In Seattle, they would have weeks of day camps and swimming lessons and a one-week sleep-away camp on the Olympic Peninsula, alternating with 'free' weeks at home or with either set of grandparents, full of play dates and the occasional sleep-overs with friends or cousins.  Idyllic, unplanned summers are no longer the norm for many middle class U.S. children whose lives are often arranged around the pursuit of becoming well-rounded and active.  It's true that even French children have opportunities to attend stages during les vacances scolaires (school holidays).  The big difference between organized summer activities for U.S. and French children though is in the variety of camp choices that are available.  Here, I've not seen long published lists of local summer camps, and the camps that do exist seem to be largely sports-oriented. (The main stage in town is one that does offer a variety of non-sports activities and outings but it fills up each year as soon as it is open for enrollment and so I know very little about it.)  Our boys ended up at a stage multisports (multisport camp) run by a local physical education teacher, and in August, they have the opportunity to attend another similarly sports-oriented one at a local country club.  In general, I am not aware of craft, cooking, music or other non-sports camps as one finds in a city like Seattle. 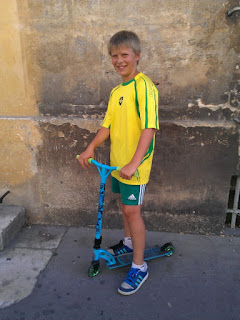 Despite the apparent lack of variety in summer camp offerings, we learned something last week about the popularity of what might be considered 'alternative' sports in the U.S.  The French of course love the globally mainstream sport of football (soccer), and they are crazy about rugby, which isn't as popular in the U.S., but it is the X games genre of sports that seem to be especially popular here.  These are the sports that involve board- or bike-riding tricks and are often coupled with ample doses of alternative music and street fashions.  At the boys' stage multisports, they learned how to use ripboards (twisty skateboards), and they spent part of another day at a popular private outdoor park just adjacent to the autoroute, sliding along tyroliennes (ziplines ) over land and water.  Among their French friends, several left youth soccer behind years ago and now spend hours perfecting and filming their tricks and techniques on trottinettes (scooters) and skateboards at local skate parks.  One of our boys has even bought himself a trick scooter at a popular local skate shop so that he can learn techniques from his friends, while the other boy is contemplating the purchase of a longboard, both of which we see all over Aix.  Of course, road biking is also popular here, what with the Tour de France and the challenging country roads here in the South, but among the younger set, BMX riding is the thing.  Adjacent to the more traditional football fields and stadiums, we've seen a number of  BMX tracks.

BMX riding of course is a new category in the more traditional Olympic games that are taking place right now in London.  I don't know yet if the French will be glued to the television during the BMX competition, but in just three days of watching French coverage of les jeux olympiques (the Olympic games), we have watched more judo, fencing, table tennis and handball than we EVER did on U.S. television.  These aren't all that mainstream in the U.S. despite being somewhat more traditional sports, but they have an avid following here.  Actually, I can see why.  From judo's formal bowing, down-to-business engagement, and brutal fighting, to the interesting contrasts between fencing's ancient artistry and elegant footwork and the electronic bells and whistles of the equipment, and the amazing physical reflexes required of table tennis and handball, we are spellbound by the French and other athletes participating in these Olympic categories.  (And the French commentators covering these sports are every bit as excited as those reporting on basketball or swimming.)  It makes sense now why some French kids bring ping-pong paddles to school to play table tennis in the schoolyard during the breaks between classes, and why the men's handball team in Aix gets the broad press coverage it does.  The pursuit of excellence in sport is fairly universal today, (given how even the smallest countries send athletes to the Olympic games), but the sports we pursue or follow may differ significantly, by society, and even by generation.  I'm sure one can guess which viewers in my household are anticipating the trampoline and BMX competitions and which ones are waiting for gymnastics and track and field.  As for national differences, we'll see how interested the French are in these sports as we follow the television coverage here this week, and next week, we'll track the Austrians' television coverage of the Olympic games from our vacation perch in the mountains of Tyrol.  Maybe we'll come across some ziplines, or tyroliennes, there too.
Posted by Anne Tuominen on Monday, July 30, 2012