One of the occupational hazards of being a sociologist, especially a sociologist who has studied tourism from a sociological perspective (for a dissertation on post-Soviet change in the Baltics), is that I have a hard time just being a tourist.  Instead, I see manufactured sights, events, and experiences all around me, existing in suspended, somewhat artificial states designed primarily for touristic consumption.  There are few genuine, 'real' experiences while one is a tourist; most of what we see and do while on vacation has been crafted for our viewing, entertainment or consumption as tourists.  I recently had the excellent opportunity to view the touristic enterprise sociologically as our family joined over a dozen Seattle families on a soccer tournament tour package that brought us to Spain's northeast coastal region and to Barcelona.

We stayed for a week on the tourist strip in Malgrat de Mar on the Costa Brava where low-budget all-inclusive hotels were interpersed with cheap food joints advertising British food and Dutch food, tourist nightclubs, and dozens of tourist shops with made-in-China kitsch and knock-off sports jerseys.  The beach was parallel to us, and seemed to be enjoyed mostly by the tourists staying in the hotels. This tourist location is designed to bring thousands of visitors in and out, and the tourism industry has crafted the 'inexpensive beach holiday on the Spanish Mediterranean,' complete with mass-produced food, cheap shopping opportunities, and what might best be called cheesy evening musical entertainment on the hotel pool decks or at the discos on the strip. (Our hotel featured Simon Grant! From England! ...and singing cheerleaders from the Czech Republic.)  We tried to venture out beyond the strip, to try to get a more authentic experience of local life, local food and the local language, Catalan.  After all, we were in Spain, or more specifically Catalonia, but so far, it was not the Spain that most Spaniards know. 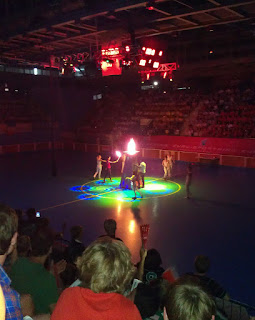 The soccer tournament that we had come for took place a short distance inland, in the middle of agricultural fields.  There, our son's team played against French, Italian, Polish and U.S. teams.  The international nature of the competition was obviously the selling point of the tournament, and this was heavily promoted at the opening ceremony, where we experienced a raucous pep rally fashioned on an Olympic opening ceremony, complete with the parade of flags, the playing of national anthems of each country represented, and even the lighting of a torch inside the gymnasium!  As it turned out, the achievement of the spirit of international friendship and understanding through athletic competition was relatively limited.  My son reported speaking briefly to some French players, and the team had some interesting international exchanges with an inconsistent Spanish referee and an Italian team with suspiciously large boys.  We also saw a fight after one match between the obviously over-engaged parents of two other teams, while our boys exchanged most of their jerseys and trinkets with another U.S.team. (Go Cleveland!)  When it comes down to it, you can manufacture an international experience by creating an international tournament and an international opening ceremony, but you can't force moments of true international understanding.  Those have to come about organically. 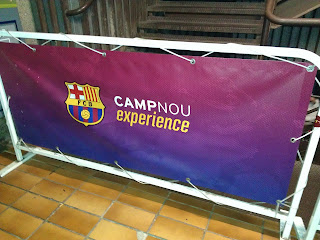 The tour package included optional events in Barcelona, one of which was a visit to the FC Barcelona stadium, Camp Nou, home of the reigning World Cup Football champions.  In the sports museum and the stadium tour, we could take photos of ourselves standing alongside photos of former and current players (almost as if meeting them in person, non?) and photos in front of the field or montages of the field (almost as if standing on the hallowed grounds of the football team, n'est-ce pas?).  We were also given ample opportunity to shop for 'official' jerseys and other gear at the retail shop, so that we could outfit ourselves just like the football champs themselves.  The 'Camp Nou experience' was yet another example of a socially constructed touristic experience.

Thinking about tourism in this way, as a series of manufactured experiences, does tend to deflate what others might think of as amazing and novel sights and events.  Sociologically-speaking though, made-for-tourist locales, sports tourism events, and museums all reflect attempts by one group of people (those who comprise the various actors in the tourism industry) to create products, views, and events for the consumption of other people (those people that buy the touristic product).  Tourism is a simply another socially constructed endeavor. 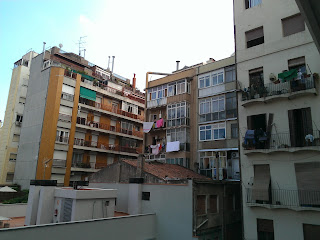 Does this mean that I don't enjoy myself on vacations?  No, I do enjoy going on holiday, but when I do, my family generally tries to stay off the well-beaten track of hotels and tourist strips.  We opt instead for rental condos or pensions where we might actually be in a typical residential area, with local grocery stores, or where we might interact with local hosts more personally.  I don't want to see people's dirty laundry necessarily, but I actually like to see how the locals live, while I am vacationing.  (We stayed in a rental flat in a residential quarter in Barcelona on our last night, and I got my look at some Spanish laundry in the photo here.)  I do appreciate views of stunning beach sunsets and amazing buildings (to the left of my Spanish laundry view, just beyond the frame of the photo, was an outstanding view of the unfinished Sagrada Familia church).  I also enjoy museum visits, to sports fields and to historical sights, and I enjoy taking my children (and even their soccer friends) on swimming excursions at the beach or in the pool.  Ultimately though I still find such views and experiences much more interesting when I am surrounded by locals and can witness a little the ways they live their lives. 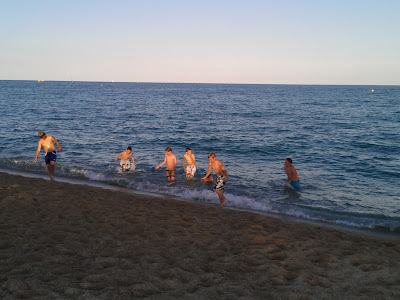