A fish out of water

One of the most indelible images from our first few months in France was of the asylum-seekers I saw storming the door at the prefecture in Marseille one morning.  The foreigners were mostly men, and the speed and aggression with which they approached the doors at opening time revealed so clearly and painfully their desperation and their need.  They were grabbing as hard as they could for the chance to find a safe place for their families to re-build a home and a life.  My family was in the longer, more sedate line, of legal immigrants, of people with residency permits in process, all of us with far greater prospects for staying in France.  The road to residency was still not an easy one, even for us as temporary seekers (see Les documents Sept. 2011, for a small example of the monumental pile of documents we needed), but we did not have the added pressures of a lost home or the painful memories of a lost life.

I've been thinking a lot about those asylum-seekers as well as of the thousands of refugees that were passing very close to France's southern shores in the months before we left, those Eritrean and Somalian refugees arriving by the boatload to Italy's islands (see for example, Italian coastguard rescues 700 refugees, Oct. 25, 2013, France24news)  Then there were, and are, the enormous waves of Syrian war refugees fleeing their villages and country to re-start their lives in Europe, adding to the pressures of those tasked with helping refugees.  And finally, in November, a natural disaster on the other side of the globe created more refugees, by uprooting the homes and lives of thousands of Filipinos.  Meanwhile, my family prepared to leave our temporary home in France, and we arrived fairly calmly and to open arms to our 'home' in the U.S.  Yet, because our physical home, our house, is currently occupied by renters, we have since had a very small taste of what life must feel like for those forced to move from shelter to shelter, bed to bed.  We've slept in 7 different beds since we moved out of our French apartment a little over a month ago, carrying our winter clothes in two suitcases each, and bags of books, electronics, and food.  Certainly, our welcome has been significantly warmer (after all, we have returned to what we call 'home'), and our shelters have been much more comfortable than the government-issue tents or makeshift lean-tos of scrap wood and metal used by the Eritrean, Syrian, and Filipino refugess.  But we understand a little of what it must feel like to lead a nomadic existence all the while trying to work, to attend school, and to manage the mundane tasks that every family needs done, day in and day out.  It's very different from moving about say as tourists, because being a tourist is such a temporary, and more luxurious and artificial experience of daily life.  Not having a real place to call home in the long-term, in which to settle in, to rest, to recharge is debilitating, on both a personal and social level.   I've discovered how rootless one feels living out of unpacked bags and suitcases for weeks on end, and how disorienting it is to wake up in so many unfamiliar beds.  It's like being a fish out of water, not a good situation in the long term.  My family's status is quite temporary and far from being detrimental, but imagine if we had to figure out how to get water, cooking supplies, and food, and access to toilets and showers, on a daily basis for months to come, as many thousands of families all over the world are right now, or if we had to deal also with the lingering personal and other traumas related to forced and dangerous departures, such as those resulting from political unrest or war in one's country, or a natural disaster in one's town, or even abusive relations in one's home.  Without stable, safe, permanent places in which to catch one's breath, in which to lick one's wounds, in which to prepare for one's social roles, children can't do well in school, and adults can't be effective employees and contributors to society.  Homelessness hurts on so many levels. 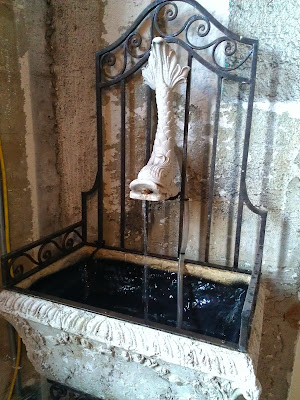