Lately, the buzzer at our building entrance has been ringing every day, sometimes even multiple times a day.  Because of some recent family birthdays and a sudden need for English language reading materials, the mail couriers have been delivering packages several times a week, and on Wednesdays afternoons, I've been welcoming an assortment of the boys' classmates who've opted to hang out at our place in town after school.  We've also had some unexpected visitors.  These visitors initially found us about a year ago, perhaps having seen our non-French name on the front doorbell, or they simply heard us speaking English on the street.  Now they've been pressing our front door buzzer quite frequently.  In the past two weeks alone, we have received three visits from three different sets of  Jehovah's Witnesses, all of whom seem to have the same French language Watchtower flyer to give us.  (We received such visits in Seattle too but not quite so frequently.)

Aix has a good share of religious missionaries.  In addition to the Temoins de Jéhovah (Jehovah's Witnesses), the Loubavitchers (Chabad-Lubavitchers) are here, although their local mission's website needs some refreshing, and I can't seem to find the usual standing invitation to shabbat dinner posted on the website, http://www.bethloubavitch-aix.com. Certainly, the missionaries of l'Eglise de Jésus Christ des Saints des Derniers Jours (a.k.a. the Mormons) are here, young men working in pairs in their white shirts, usually stationed right about where the Lubavitchers' menorah was set up during the past Hanukkah, near the Office de Tourisme .  Why are they all here in little Aix, or in France for that matter, with its heavy Catholic influence and relatively vibrant Islamic population? 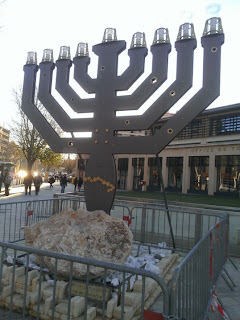 For one, France's officially secular orientation makes it an attractive destination for those looking to save souls.  (I wrote about the French approach to secularization in Les âmes des vivants et des morts, Oct. 30, 2012.)  France's active Catholic population is shrinking.  Between 55-65% of the French population identifies itself as Catholic, while 28% of the French declare themselves without religion (IFOP 2009 "Analyse: le catholicisme en France 2009").  Of the French 'no religions', that's nearly double the rate of Americans who declare themselves as having no religion--15% in 2008, according to Kosmin and Keysar 2008 (see "American Nones").  Of the declared French Catholics, less than 5% attended church regularly in 2006, down from 27% fifty years earlier (IFOP 2009, p. 8).  Church attendance is but one indicator of religious activity, but when looked at across time, it's clear we see decline here as well.  (The Muslim population is seemingly more active, if we use slightly different measures, mosque attendance, following Ramadan, etc., as IFOP did in 2011 "Enquête de la population d'origine musulmane".  They make up between 3-5% of the French population, with a considerably larger proportion, about 25%, here in the south of France, IFOP 2006 "Eléments d'analyse géographique de l'implantation des religions en France".)  Another potential attraction is that in Aix, anyway, there is a large young adult population.  Aix is a multi-college town, with numerous universities and grandes écoles (elite French institutions of higher education) here, full of young adults experimenting and figuring out who they are and what they want out of life.

So, religious organizations see missionary potential here.  And, as my Sociology of Religion students learn, religious organizations are no different from any other social group, they must recruit or reproduce their membership, or they will die out.  (Ever heard of the Shaking Quakers?  Their carefully crafted furniture continues to survive the test of time, but that's about all that's left of the Shakers.  They practiced celibacy, so recruitment was their only tool and eventually they couldn't compete with other groups or with the attractions of sex.  See Ken Burns' story about them, complete with poignant hymns sung by old Shaker women: Hands to Work, Heart to God.)  Religious recruitment is an important supplement to religious reproduction, and it is so important that Mormons and Lubavitchers and Jehovah's Witnesses send missionaries all over the world, teaching them to speak the local languages and to do religious outreach, while distributing translated religious publications.  Going on mission is a rite of passage for many young Mormons (a young Mitt Romney fulfilled his Mormon mission in France), while making home visits or contacts is a monthly requirement for Jehovah's Witnesses, if they want to be considered members of good standing, and if they hope to maintain or increase their numbers. That means that even if we kindly but firmly keep the Witnesses' visits to a minimum (or try to ignore their doorbell rings), they will keep coming back. Their religious survival depends on it.
Posted by Anne Tuominen on Thursday, March 21, 2013

I live in rural Japan where visible foreigners and minorities are quite rare. I was surprised one day to see a non-Asian young man in my town and immediately said "hello!" Yes, he was a Mormon missionary. He was very nice but kept trying to invite me to learn more about his religion to which I politely declined. In addition, I have been getting a lot of flyers from the local Catholic church in my mail. I thought that by fleeing the states to Japan I would be free but alas Western religions continue to haunt me!