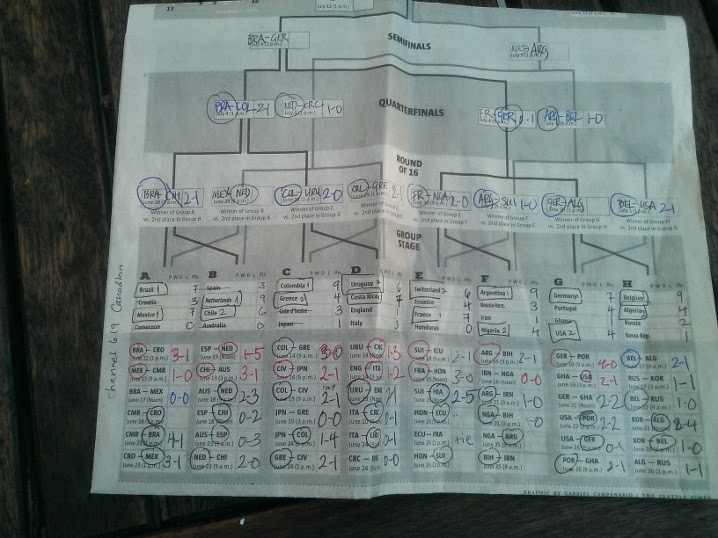 For the time being, I think it's fair to say that I'm 'soccered out'.  I've followed more World Cup games in this year's competition than I've ever done, recording almost faithfully the outcomes of each.  This is all on top of the live trainings and games and tournaments in which my own son plays and which I orchestrate as the family's resident soccer mom.  So, while I wished Messi, the magician, had been able to help his fellow Argentines win, I found the goal by the German "Super Mario" yesterday to be a magnificent end, for his team, and for my 2014 World Cup viewing experience.  (An earlier experience, in 1990, culminated in a similar result, except then I found myself in Germany, celebrating that victory in the streets of a small town.  It's hard to believe that this year's hero, Mario Goetze, was not even born then.)

Soccer/football has been widely called the beautiful game.  It's the name of a documentary film on African football, and apparently, the soccer great Pelé has referred to football as such.  It's definitely beautiful because it is so simple, anyone can play, with very little equipment and space.  The game has also been called an illogical one and an anxious one, because it's not often the team with the greatest possession or the best shots at goal that wins, and this World Cup certainly showed us this a few times.  But why do I enjoy it so much?  I've never played it, not even as a child.  I suppose having children who play, especially at an increasingly higher level makes it beautiful because the experience feels very academic to me.  I learn so much from each game; I absolutely enjoy watching a game and then reading analyses or talking with knowledgeable individuals about what I've just seen.  I also learn about how the sport is organized in different societies, like what I learned about le foot in France: Un certain regard May 2013.

Friendships have also come about through this sport and that's a beautiful thing too.  It's not just our son who hangs out with his football buddies; our entire family spends a lot of time with football families.  We travel and socialize with them: we've recently  attended a wedding with our U.S. soccer friends, and in France, we camped several times over tournament weekends.  I even shared a humble bungalow with a French dad and his son.  Not all of the moments were beautiful ones, even in Provence, but the French penchant for proper pique-niques alongside the soccer pitch, complete with wine, (see A table, May 2013) and the many language and cultural lessons learned make for many cherished memories in my book.  (See Allez les gars for what we learned about Provencal cross-town rivalries, Nov. 2012, and Le bonheur, Dec. 2012, for the challenges some French girls face if they love the beautiful game too.) 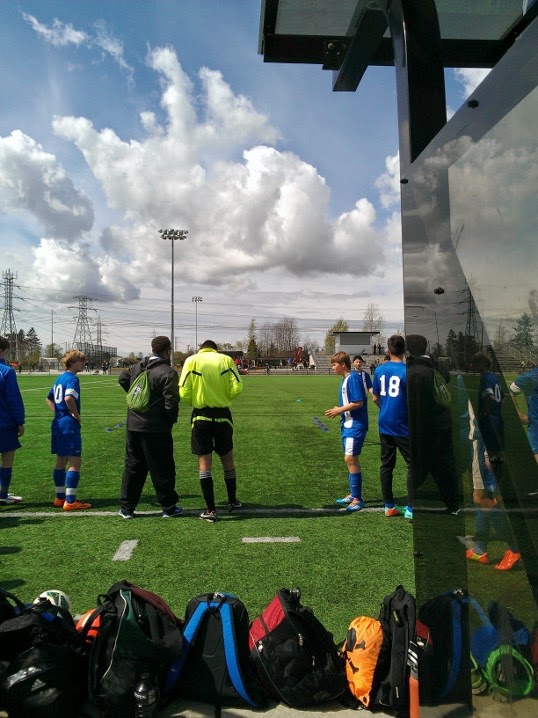 The ultimate beauty of fútbol for me though is how sociological it is and how well it reflects social life.  David Brooks at the New York Times captures this, yes, beautifully, in his op-ed piece last week: Baseball or Soccer? 10 July 2014, where he argue that soccer is in a sense a mini-sociological platform, and how each of us in our social worlds is playing soccer.  We all have our roles, and these roles may be enacted in different ways depending on all kinds of social factors: who is filling the other roles--the ones with which we are interacting, what are the constantly changing environmental conditions (on the football pitch, in our workplace, or at home...) and so on.  Even when we feel tuckered out, by sometimes overwhelming social demands, by too many football matches, too many hard tackles on the pitch, whatever it is, we may retreat for a short while, but never completely.  Who we are, the game(s) we play, and the life we live are all inherently social.  I'll let Brooks sum this up:  "Most of us spend our days thinking we are playing baseball, but we are really playing soccer. We think we individually choose what career path to take, whom to socialize with, what views to hold. But, in fact, those decisions are shaped by the networks of people around us more than we dare recognize."