The tributes to Nelson Mandela and his lifelong fight for social equality offer a good opportunity to speak briefly about race and racism as I have observed it in the months up to my recent departure from France.   This fall, accusations of racist comments made by and about government officials and politicians have been widely reported in the French press (see "Racisme en France: Un écran de fumée de PS, selon Copé". Nov. 19, 2013, Le Monde) and coincidentally, in Italy as well ("Italian politician compares black minister..." Aug. 26, 2013, The Guardian).  Our personal experiences suggest that these are just the proverbial tip of the iceberg.  We have heard many such comments from the mouths of French residents of all backgrounds in our nearly 2 1/2 years in France.  My children speak of rampant racist talk at their French public school from teachers and students alike, directed particularly towards French of Muslim or African backgrounds, while we certainly heard our share of ethnocentric comments about Americans, often derogatory, sometimes complimentary.  (In some circles, our foreign presence seemed to render social status.)   While not expressly racist, homophobic comments too were not uncommon, especially on the sports' fields.

From our U.S. West Coast perspective, where overt comments reflecting racism, ethnocentrism and homophobia are generally unacceptable even though these -isms and phobias continue to manifest themselves in racist, ethnocentrist and homophobic practices, the French expressions shocked us every time.  Those coming from politicians seemed outrageous and inexcusable, yet it's hard to know how to interpret the racist talk, especially in a country where race is officially ignored and its use in government records and census-taking is prohibited.  It's not like the South Africa of Mandela's youth and young adulthood where the racist talk was clearly coupled with official racist practices that kept the minority whites in power.  In regards to France, one might ask, is this all just a bunch of big talk (and to what ends), or do the French walk their racist talk, promoting the privilege of those who have the right background and skin color?  Officially, there is no racism, not in France, not in the U.S. for that matter either, but we can look at who is represented at the top of our most powerful institutions to see that minority populations (by race, but also by ethnicity, national origin, religious affiliation) are not represented in numbers consistent with their representation in national populations; in France we would expect to see more African and Muslim representation while in the U.S. it is African Americans, Hispanics, and Native Americans who are particularly underrepresented.  (Interestingly, in both France and Italy, it is the singular presence of female black government ministers which seems to have upset the old social order and triggered the recent racist comments.)  Looking at the numbers at the top is only one way to see evidence of racism though; as my sociology students learn, institutional racism can be subtly built into social structures.  Here it helps to consider the opportunity structures in societies because it is through these that we see representation at the top.  What are the opportunities for access, to good schools, for example, or to social networks (that is, to people with connections)?  What are the implications for good health outcomes (and thus better outcomes on other indicators) for certain communities that perhaps live in unsafe, unsanitary, and crowded conditions?  And who lives in these communities?  Many months ago, I wrote about the ways in which doors close, for women and for immigrants. (See Une porte fermée, March 2013.)  Race too opens and closes doors, even in societies where race officially doesn't even exist. Unfortunately, when the doors do open, the few who manage to get access to seats of power and privilege among the traditional officeholders are still not well-protected from racist treatment and remarks.  Thus, Mandela's quest for racial equality, in his own country and elsewhere, continues. 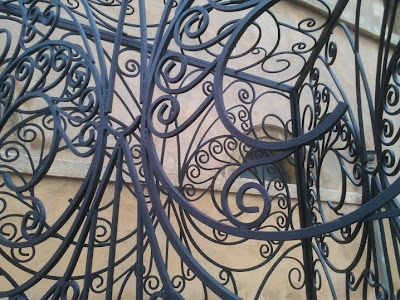