My ados (short for adolescents in French) and their homies are big into skating and longboarding.  Up to a dozen classmates meet in town for skate days, trying out tricks at the local skate park or seeking out new surfaces and skate-able nooks and crannies around town (and trying to avoid getting yelled at in the process by passers-by).  The hallway outside our apartment's door is often a parking lot for the many different kinds of boards, or 'decks', when the skaters need a break.  Skating seems to be a great way for young teenagers to be athletic, social, and inventive.  Thus, it was with mild interest that I caught an article in the New York Times about a skateboarding Finnish carpenter who invented a business niche for himself, selling handmade boards made out of new combinations of materials (Foster, Nick. Nov. 3, 2013. "Taking a Local Approach to the Global Sport of Skateboarding, The New York Times ).  While his creativity and craftmanship are inspirational, I was really taken by the brief mention about the entrepreneurial spirit that has become popular in Finland, making it possible for someone like this carpenter to start a business with a global reach. 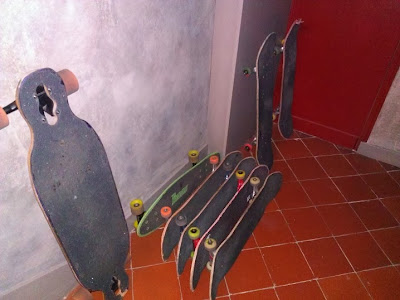 The entrepreneurial spirit is something that I see as very American, even if the word comes from old Europe, from France.  Entrepreneurship, as we understand it in the U.S.--the idea that one can start a company with an innovative idea and weather the risks, hopefully with a solid business plan and generous investors, and then propel that into a successful business, locally and perhaps even globally--has been slow to establish itself in Europe.  This feels particularly so in France, where about one-quarter of the French are employed by the state or local governments and where the start-up culture is stymied by complex administrative regulations and sometimes punishing taxation.  I've read elsewhere that French culture just lacks that creative and independent spirit associated with entrepreneurship.  I don't know about that.  The French are definitely creative, and there are all kinds of small businesses here, especially those associated with agriculture and food (think of the many small family-owned wineries, the outdoor food markets in every town).  However, it appears to be true that the growth in the numbers of auto-entrepreneurs in other sectors has only come about very recently.  This may be a Europe-wide trend, given what seems to be happening in Finland as well.  Certainly, the persistently high unemployment in France has likely pushed some to get creative and seek their economic livelihoods by starting small-scale businesses. On our street we have new and old ones, the Persian rug repair shop, the tattoo parlor, the Szechuan Chinese restaurant, and the secondhand clothing store, but it is amazing how many small retail businesses and restaurants, have come and gone in the short two and half years we have been here.  Entrepreneurial efforts based on digital and manufacturing technologies can also be found here, with many such businesses concentrated in an office park area southwest of Aix.  I can't say how many of those are thriving and which ones are surviving, but it is one such start-up that brought my family to France in the first place.  That the office park area itself continues to be expanding and the traffic has gotten heavier, prompting more road construction, suggests some business successes there, or new ideas for new companies. We know that among the EU countries, France has the highest rate of entrepreneurial development right now (Tozzi, John. Aug. 16, 2013. "Europe's Hotbed of Entrepreneurship? France" Bloomberg Business Week). That, along with a new school specializing in entrepreneurship (Mitchell, Adam. Aug. 27, 2013. "France to launch school to teach entrepreneurial skills." France24) indicate a certain momentum.  On the other hand, capital and spending are tight all over Europe, so it might be difficult to launch a true entrepreneurial revolution right now in France, or elsewhere.  It's a bit like attempting a bigspin or another trick on a skateboard; the momentum and the conditions must be just right if the skater hopes to land on his feet with his board and body intact.
Posted by Anne Tuominen on Monday, November 11, 2013