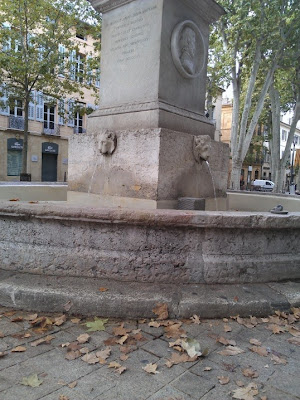 The season of les feuilles mortes (dead leaves, or autumn leaves) is suddenly upon us, even in Provence where as recently as this past Saturday, we were swimming in the Med and attending some football 'friendlies' along the still hot French Riviera.  By the next day though, I noticed that leaves were falling and floating, slowly, but inevitably, to the ground.

A similar theme, of inevitability and floating leaves, or rather, dollar bills, appeared in a blog post by a Seattle Times writer last week (see Guzman "Are wallets on their way out?" The Seattle Times, Sept. 7, 2013).  The post was about how cash, and the wallets in which we carry it, are both becoming less necessary, maybe even obsolete, as we rely more and more on credit cards, automatic payments, and our smartphones, rather than hard currency.  I haven't been in the U.S. in over two years so I am not sure about the demise of U.S. bucks. Certainly here in France, online bill paying, barcodes, and the bancaire (debit card with a chip)  that I carry means I can easily shop in most large stores, buy gas, order a train ticket online or at an automatic machine, and run through an autoroute toll booth much more quickly than I could with cash.  (Sometimes, the automated payment systems seem less than efficient, as I pointed out last August in Les files d'attente.)  L'espèces (cash) though is still used widely in France, especially monnaie (change).  After all, the single euro unit is a coin, not a paper bill.  Preparing for that, I had invested in a new wallet with a large coin compartment before coming here.  The wallet was a good investment; it carries the requisite personal identification and the copious change that I go through very quickly, particularly with our near daily baguette purchases (80 to 95 centîmes each, so that's a euro coin each time) and my biweekly or sometimes daily produce market purchases which range from 3-12 euros each time.  I also use change at some French highway toll booths where special cash baskets accept payments of tolls of less than a few euros. You just throw the coins in! Interestingly and archaically, I have a chequier (checkbook) here too, as the French still use them.  (Are they the last ones in Europe to do so?!)  I still have to write checks to the boys' school, for lunch fees, and for sports' fees, and I wrote two tax payments to the government, by check, which were reimbursed by check as well.  (Our other French bills are paid online, like we do in the U.S.)  Paper money is still necessary here also; a blogger friend recently posted about on-the-spot cash fines throughout the EU for some traffic infractions (see Speeding in Spain on Aixcentric.com, 9 Sept. 2013).  It's always a good idea to have some cash on hand for those speeding and other emergencies.  (This is true in the U.S. too: I think about the time my family had just arrived from Europe after a vacation and was stranded at a horrible run-down airport hotel in New York around midnight.  I somehow managed to convince a passing shuttle driver to take us away from there to a better lodging, and thankfully we had some cash to pay him, even though, embarrassingly, it was not in U.S. currency.) 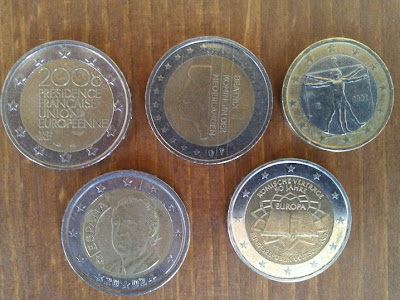 I suggest that hard currency will continue to be important despite the prognostications.  For one, it remains the means by which we purchase, sell, and exchange goods and services with many people, such as the market vendors I visit each week in Aix en Provence.  And, besides its obvious instrumental value, currency is also a social artifact, one that is closely tied to a people's values and identities. Societies spend time (and money!) designing currency that reflects their social values and origins.  (We can see this in the old coin collections of national and historical museums as well.)  For example, Americans continue to proclaim their Godly trust in and on their money, while the face of the long-living Queen Elizabeth graces the many different currencies of her current and former dominions.  Even in Europe where the European monetary union has submerged numerous national currencies into a shared regional one, the member countries reflect their national identities by taking turns designing the backs of euro coins (above, starting clockwise from the top left, 2 and 1 euro coins designed by France, the Netherlands, Italy, Germany and Spain).  For many of the members, a kind of nostalgia seems to persist for their old currencies which keeps alive some aspects of social identity.  For example, in France, prices are often still listed in francs and euros and the names of even older currencies like sous (from the time of Charlemagne) are used in casual speech to refer to money or cash.  These currencies may have gone the way of les feuilles mortes, but they remain important symbols of French identity and daily life.