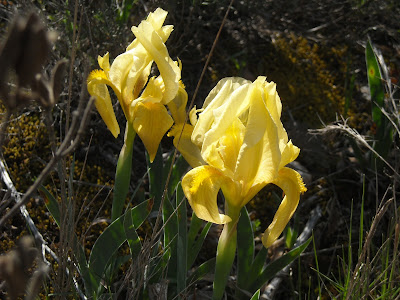 According to French meteorological tradition, the reason spring hasn't fully arrived, even in Provence, is that the days of les saints de glace (the ice saints), St. Mamert, St. Pancrase and St. Servais (May 14, 15, and 16) have not yet been passed, so the threat of frost is still present.  (Météo France tells us about this tradition, here, in French; and Wikipedia does here, in English.)  Despite the so-so weather this past week, we did go traipsing about with visiting grandparents, enjoying the irises blooming here and there, and we came across some human bones which told us about some other saints and traditions.  We stopped in at the church in the coastal town of Stes-Maries-de-la-Mer where Mary Magdalene and another Mary, and their servant Sarah, were believed to have come to Provence in their escape from Palestine nearly 2000 years ago.  Les os (the bones) displayed in the glass case in the crypt are believed to be those of black Sarah as the servant woman was called, and it is in her memory that Romany or gypsy families come to this town each May.  There is also a font of freshwater in the middle of the church sanctuary which seems to have sprung miraculously around the time of these women's arrival.

I asked a nun about purchasing a pamphlet in English about the legende (legend) of the three women and the bones, and she swiftly corrected me, saying that this is what the tradition tells us.  In French, legende seems to invokes a story that may not be altogether true, whereas perhaps tradition gives the sense of something that has been known or believed for so long that it must be true, or it certainly can't be proven wrong.  Perhaps it's like the quote I have long savored, from American author Ruth Reichl's memoir Tender at the Bone where she says her story "...is true, but it may not be entirely factual...I learned early that the most important thing in life is a good story." Societies sometimes are compelled to tell good stories when they are missing some of the bones or other details about certain events or people or discoveries, especially when these relate to questions of faith and origin.  In fact, I have been to another crypt, in another church, in another town in Provence, at St. Maximin, where tradition suggests that it is Mary Magdalene's skull that is before us in the hushed and darkened reliquary.  Is it really her skull?  We will never know for sure, but it doesn't matter, so long as someone believes it, either the tourists or the religious pilgrims.

In the U.S., with our much younger historical record, we also have traditions and legends that fill in the gaps about our national origins and our nation's "saints."  We have the story about the first Thanksgiving and the pilgrims, about which I gave a short presentation when we first arrived in France (see Beaujolais nouveau, Nov. 2011).  We have known for some time that that story may not be quite as we learned it in grade school or in our U.S. history books, but it still remains an essential part of our traditional understandings of the nation's origins.  Yet, just this week, this tradition may be challenged, thanks to the news report about the discovery and scientific analysis of a set of bones.  These bones, of a young pilgrim girl, tell a new, different kind of story, of cannibalism among the Mayflower settlers (see "Evidence of Cannibalism Found..." by Nicholas Wade, The New York Times, May 1, 2013).  This makes me think about the story of the American woman whose cells made medical history but were loaded with very different meanings to her family and others (see my post Les âmes des vivants and des morts, Oct. 2012).  Two thousand years from now, what will we think about the young pilgrim girl's bones?  Will there be a tradition, or story behind them, that goes beyond what science can tell us?  Will it be a story of thanksgiving, or one of horror?  Will the bones be resting in public view; will they be revered, or feared, or even disbelieved?  What will the bones tell us?
Posted by Anne Tuominen on Thursday, May 02, 2013