On two occasions in the past two years my spouse and I have benefited from the assistance of les bons samaritains (good samaritans) along U.S. and French highways.  The first time was on the eve of our family's move to France when the car we were driving inexplicably stalled in the middle of a busy Washington state highway span, just outside of downtown Seattle.  Cars behind us were traveling at highway speeds and we had no shoulder to which to escape.  We could do nothing except call 911 for help and hope that no one would hit us from behind.  A very brave and kind man stopped his car just behind ours to offer assistance and to alert other cars to the stopped traffic.  Luckily, a tow truck driver reached us before any damage could be done to cars or humans alike, and our good samaritan departed safely and anonymously.

On a very wet Saturday in Provence this past weekend, we had another similar experience, as we were trying to head south for a sports tournament and camping weekend.  As I was easing our car onto the autoroute, the car fishtailed suddenly, and then began hydroplaning, causing me to lose complete control.  We somehow slipped between the highway entrance barriers without touching them and spun around at least 1 1/2 times across three lanes of the highway without getting hit, and then came to rest with a little crunch, against the center median.  We all caught our breaths for a moment, and then suddenly realized that our car was wedged into the barrier and was directly facing oncoming traffic in the fast lane!  As my family escaped the car, scrambling onto the small gap in the center median, a driver in a minivan just entering the highway and perhaps witnessing our spinning, pulled over.  The driver ran up along the autoroute, opposite my spouse, and in the rain, both waved their arms up and down to slow the oncoming traffic as best as they could.  It appears that another good samaritan stayed in the car to call for assistance on our behalf.  Meanwhile, another car also stopped, with a third good samaritan making a call on his cell phone while yelling to us across the slick wet lanes to ask if anyone was hurt, and reminding me to put on the gilet (safety vest, an obligatory piece of car equipment in France).  Thankfully, highway traffic and public safety crews arrived shortly after, blocking our lane of traffic and helping us get out of the mess.  While these men were not what we would call good samaritans, as they were doing their jobs, their professionalism was dosed with empathy, and I appreciated that they didn't smirk or act frustrated with our French, which was even shakier than usual.  The man with the lane closure equipment and the tow truck driver were both especially kind, and somehow, all of these strangers were able to help us enough to send us back on our way.  (We didn't even merit a visit from the local gendarmes, or police, and the resulting damage to our car doesn't quite tell the harrowing story, although we tried to describe it the best we could to the waiting football families at our campground near Montpellier.) 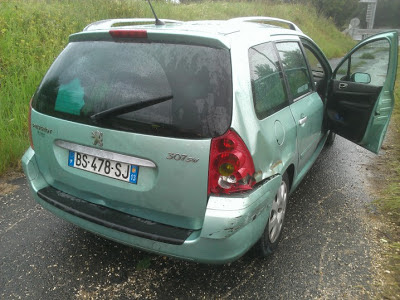 The big surprises to us from the past weekend (besides the fact that our son's team actually won the tournament that we struggled to get to!) were the assistance and expressions of kindness from strangers that we experienced.  These are certainly not what one is taught to expect in France, if the countless books about the French are to be believed, and at least in terms of French drivers, in my experience, they aren't often even very generous about moving over for ambulances or police cars whose sirens and lights are on.  In the U.S., on the other hand, it seems that often, if a stranger is hurt, people will try to help in some way.  In fact, there are some interesting national differences in the sociolegal expectations associated with being a good samaritan.  In the U.S., being a good samaritan is seen as personally risky, especially if help is rendered without consent and if something goes wrong.  So, good samaritan laws, which vary by state, tend to protect the good samaritan's actions against liability, but don't require anyone to offer assistance.  The French law, on the other hand, actually requires passers-by to be good samaritans.  The protection lies with the one who is in danger, and thus, assistance must be rendered if it can be done so without peril.  Not helping someone can result in the charge of la non-assistance à personne en danger (non-assistance to someone in need), and a hefty fine and/or jail time. (Click here for a short piece in The Global Times, Oct. 31, 2011, comparing 3 different kinds of good samaritan legal scenarios, in China, U.S., and France.)  In a sense, these differences accentuate the U.S. protections of private rights and the French expectations of public responsibilities.  (The different assessments of risks are clear too; see La sécurité, Oct. 2011 for more on this topic.)  Yet, I think for those requiring assistance, whether due to car accidents in France, or tornadoes in the U.S. midwest, or even wars as in Syria and elsewhere, in the moment of dire need, it matters little what the civil incentives and protections are.  I have to speak from experience on this one: what matters the most then is that someone has stopped to help.
Posted by Anne Tuominen on Tuesday, May 21, 2013

All I can say is that reading this, I'm just so glad you're all OK! It must have been a harrowing experience.

Am in the UK right now at a conference, wish I had time to drop by!