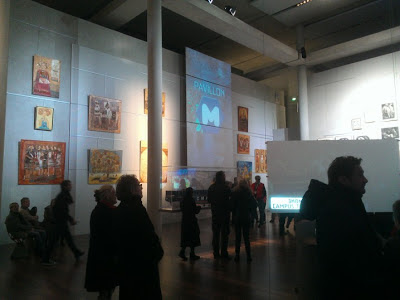 Pavillon M (pavilion M) is the name of a new exhibition space built in Marseille for its designation as the 2013 European Capital of Culture.  According to the pavilion brochure, some of the things to know and see about Marseille and the exhibits in the hall also begin with the letter M.  M comme (M, as in,)...
It is from this terrace that I began realizing a few more additions to the M list above, for what else did we feel and see and hear in Marseille on this late Saturday afternoon in early February?  An ever-stronger Mistral wind kicking up, a few thousand people gathering for an anti-gay marriage Manifestation (demonstration) called Manif pour tous ('demo' for all), and the echoes of magnified voices speaking out against the mandate for gay marriage, an important measure for which had just been passed through the National Assembly the same afternoon. 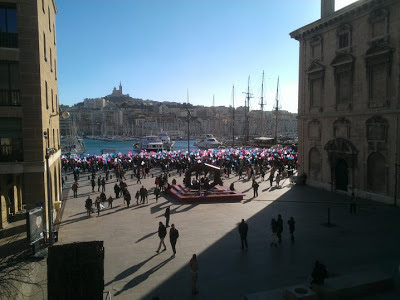 Now it made sense why we had seen clusters of French riot police along the streets with odd shoulder pads on top of their uniforms (a bit like those worn by American football players); they had been preparing for potentially violent protests.  As it turned out, the greater danger to all was from the wind.  We later discovered that the French weather service had issued a Vigilance Orange (orange alert) for Marseille and its environs due to increasingly strong wind gusts, one of which was recorded at 130 km/h in the late afternoon near our attempted route* towards the commercial port area to view other Culture Capital exhibitions (as reported in "Un vent à ..." La Provence, 3.2.2013).  The Mistral rattled and loosened temporary fencing as we passed by, it set off an alarm on a construction crane, it threw one of my sons to the ground, and I was pushed violently into a metal stanchion and against a concrete block.  If not as dramatically, certainly more metaphorically, that fierce wind also threatened to carry off the pink and blue protest flags of the anti-gay marriage demonstrators.  Their traditional views on marriage may still be audible and visible for now, but social change is in the wind.  In the long run, or more likely in the shorter run, perhaps even in this same year as Marseille's culture party, the French presidential mandate on behalf of gay marriage will succeed, thanks to the support from a growing majority of the French public and the inevitable responses by those in the French parliament.  So, M is also for Mariage pour tous (marriage for all), and it is coming, to Marseille, and to the rest of France.

*See http://aixcentric.com/2013/01/23/marseille-marvellous-progress/ for a very do-able itinerary for a single day visit to Marseille.
Posted by Anne Tuominen on Sunday, February 03, 2013