My home state of Washington has just changed how it distributes alcohol for public sale.  As of June 1, 2012, hard spirits can be sold privately right alongside beer and wine, rather than by state-controlled liquor stores.  (The transition brought about a little shortage this past weekend, see A Taste of Prohibition as Liquor Stores go Private by Kirk Johnson, The New York Times, May 26, 2012).  Most U.S. states already allow for the private sale of alcohol but I have lived in places for most of my life where the state has controlled alcohol sales and access to some extent.  (For example, besides Washington, there were state-monopolies of sales of spirits, wine and most beer, in Finland and in Alberta, Canada.)  Such strict control over sales has in a sense made state employees the ultimate arbiters of taste, as Johnson notes in the article above; "....their decisions on what to stock dictating what people could order in bars or buy in the stores."  Laws can influence our behaviors certainly, but they can also reflect or even influence us to think in certain ways about the subjects in question.  Some might argue that attitudes towards alcohol in the U.S. are in fact relatively negative because of the greater state control over access. 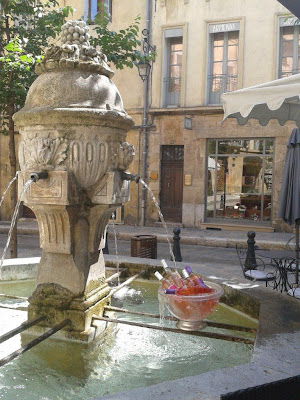 In France, (like in most U.S. states now), governmental control over the sale of alcohol is much looser.  Beer, wine and spirits can all be purchased at our local grocery store at Monoprix, so long as the purchases are made before 21h30 (9:30 pm).  (I understand that there is a 10pm rule in some cities like Nice and Lyon, so I gather that the sale hours are by cities or other administrative units throughout France.)  The weaker state control over the sale and purchasing of alcohol in France is matched by relatively more relaxed social rules and attitudes towards alcohol consumption.  Children can sit alongside their parents in bars here, which greatly delights our footballer who can finally go to a local pub with his father to watch televised football games, and wine is a common lunchtime beverage, even during the work week (see it chilling here, in the photo on the left, in a lovely fountain adjacent to a restaurant in Aix).  It's certainly not one habitude (custom) I've adopted, but at midi (noon) when office work grinds to a halt and many shops close, if I'm dining out for lunch, I am always asked if I'll be having wine with my déjeuner (lunch).  I can even get wine at our family's favorite take-out kebab place, or at McDonalds!  On the weekends, the enjoyment of wine at lunch is even more pronounced (the choices for beer are surprisingly limited and tend to swing towards the lighter versions).  At the rugby regionals in Avignon a few weeks ago, parents walked around offering wine during our son's team pique-nique (picnic), and even the coaches had some despite an afternoon of matches still ahead.  This past weekend at a soccer tournament, in Antibes along the French riviera, I mistakenly thought there were pitchers of  juice on the table at our pre-paid group luncheon and poured some for my son, first from the pitcher with the dark juice, and then upon realizing my mistake, from the pitcher with the pale pink juice.   Both pitchers contained juice alright, but it was the fermented kind, meant for the the coaches and parents.  The inexpensive tournament meals were nothing to write home about, as they were cheap fare meant to feed hundreds of hungry adolescent soccer players, but each meal was three courses and included rouge ou rosé (red or rose wine) for the adults, and water for the children.  (French children typically drink water with their meals, not milk.)

While I didn't expect to be drinking wine during the middle of an event organized at a youth tournament, or to see coaches doing so, I guess I shouldn't have been surprised by it because the teachers at our boys' public middle school also may have wine at lunch, in the same cantine (cafeteria) as the kids.  And, the adult chaperones at the school field trip lunch I participated in last fall all had wine as a matter of course.  The wine drinking is all very normal; my spouse suggests that it's because drinking wine is not considered a vice here as it sometimes is in the U.S.  So long as alcohol is enjoyed in moderation, no one bats an eye.  But, as anyone knows, it sometimes hard to stop after just one glass or one bottle, and even one glass can impair one's judgment and concentration; one wonders how Peter Mayle made it home from the long wine-filled Provençal lunches that he describes in A Year in Provence, or who does the driving for those connoisseurs enjoying themselves at the many wine bars in Aix (lucky for us, we can walk home).  Alcohol is in fact the main cause of traffic fatalities in France according to the 2012 Code de la Route (the official French driving rules 2012).

When it comes to driving and alcohol use, or public safety, states do step in, regardless of the prevailing social attitudes towards alcohol or the degree of economic control over alcohol.  As elsewhere, French police can stop drivers, test them for alcohol use, and sanction them if their alcohol levels exceed the accepted limits (these limits are in fact lower in France than in Washington state and many other places: the limit is 0.5 g/l blood alcohol content).  This relies on the threat of sanctions though as a way to control alcohol use, which isn't always the most effective way to ensure that alcohol and driving don't mix.  Perhaps the French state recognizes this, because in just one month, on July 1, 2012, a new alcohol-related law goes into effect here, requiring that all private cars have ethylomètres (breathalyzer kits).  In France, the state is mandating that drivers have equipment in their cars that will give them greater access to information about their own alcohol levels and may hopefully encourage more personal responsibility for behavior.  In contrast, the Washington state law opens up greater economic and social access to alcohol, giving individuals more freedom to buy and make choices.  Both laws touch on alcohol, in different ways, but together they show us that ultimately, social forces external to individuals remain important influences on how we behave and what we think.
Posted by Anne Tuominen on Friday, June 01, 2012

With my four kids in France, I've been to many kid functions where wine is served. As an American, I agree, it is surprising, but delightful. You may also notice that French people drink wine only with food. If you offer wine or spirits without food, they usually don't accept. They also don't drink very much with lunch. It's not so much moderation as it is a healthy place for wine in a meal.

I agree,it's lovely, though I have to say with all the wine bars and pubs around here, I see plenty of alcohol consumption that doesn't involve meals, unless you count a cigarette a meal. But Aix is a college and tourist town so that skews things a little. For students and vacationers, there are lots of good reasons to have that little verre du vin rosé or pastis on a hot afternoon. For those of us who actually have to get some work done, well...the wine is better left for mealtime.
Thanks for reading. (I enjoy your posts and the photos of your gorgeous children.)

Well, in this case I think we have to buy an ethylomètres soon :) I didn`t know this so thanks for your advice. See you soon Anne!