The Boys in the Boat, by Daniel James Brown (2013) is currently getting a great deal of attention in the Pacific NW.  The book was mentioned in the local Seattle paper before the opening of boating season this spring, a local university where I teach has just selected it as its common book for next year's incoming freshmen (see http://www.onlinefast.org/wwutoday/news/the-boys-in-the-boat-selected-as-western-reads-book-for-2014-15 ), and not too many months ago, I caught a mention of the book on a Facebook post by a brother-in-law who was a Husky varsity crew alumnus himself.  Brown frames the story around the life of a young man of very modest means who goes off to the University of Washington in the early 1930's to study engineering and becomes a member of the collegiate rowing team.  The broader story is about the importance of teamwork and perseverance and how underdogs do sometimes win (a favorite American theme).  Along the way, we learn about the sport of rowing and a little bit about the craftsmanship of wooden boatbuilding, and while the writing is a bit heavy on hyperbole and foreshadowing (the Nazi specter looms large as do impending dust storms, cold spells, and heat waves), Brown shapes and paces the story well, enhancing it with details of the broader socioeconomic and political context.  For me, the best part though is the endnotes which are offered in an abridged version in the book and more completely online.  Brown's transparency is refreshing and satisfying as he explains the sources of his accounts and statements and even how he contrived some of the obviously undocumented quotes.  Some might quibble that he was brazenly filling in too many gaps but I would say he was telling a story based upon his interpretation of the sources available to him (and he wasn't lazy in digging for sources).

It is the sources that Brown had available to him that really caught my eye.  The interviews, and especially the journal and logbook entries, printed photos, and personal handwritten letters that the author relied upon made me realize how increasingly rare those latter archival sources are, and make me wonder how our different modes of recording the ephemeral events of our lives today will color future stories and accounts of lives lived, victories won, or events experienced.  For example, my children have never written the kinds of letters or had penpals like I did, or experienced the regular bliss of receiving a letter in the mailbox (many of my letter-writing Finnish cousins and penpals, and my Swedish and Danish ones,are still part of my life, if in smaller ways than when I was younger).  They have never waited for photo prints to be made or thumbed through packets of them fresh from the photo processing shop.  They do not have boxes of old letters, in the handwriting of grandparents, younger siblings, from a romantic partner, or half-filled old grade school diaries, piles of printed photographs--loose and in albums.  I'm not imagining that any of those in the boxes in my attic and the files in my office will ever be of value to anyone except me and I am sure most will likely end up being thrown out someday.  I am grateful though that my spouse's grandfather's precious letters home during World War II were lovingly saved by his wife and later collected and archived by his eldest daughter so that we can all have a small understanding and the physical touch of how the war was experienced by a family member and how it likely colored his life.  Similarly, if those UW crew men in Brown's book hadn't kept journals and written letters in the first place, and if their sisters, girlfriends, grown children hadn't saved these, and if the logbook of the crew coach hadn't survived, we would not have the rich story that Brown tells us.  I wonder how authors will fashion and tell the stories that my kids and their kids will read years from now.  What will the documented sources of these stories look like and feel like?

Saving everything, especially today when many of us have so much, threatens to overwhelm us in clutter and garbage.  It is satisfying to reduce, to de-clutter, to clean out, but some of the 'documentation' that reminds me of the story of my life and of my world I just won't part with; I'll leave that decision to my descendants! They'll have to decide if my huge email inbox, my yearly wall calendars, my tattered photo albums, or even the posts of this little journal-y blog are archive-worthy.  Others are already making similar decisions about loved ones' materials on social media sites and on laptop hard drives.  In the meantime, I will record here, for posterity or for the garbage can, that my family had a magnificent in-the-boat experience once too, last year, when our German cousins arranged for us to take a one-day, 32 km paddling trip together down the Ardèche river in southern France.  While our less than harmonious paddling and some mild rapids resulted in a few out-of-the-boat instances and there was no gold medal at the end of our trip, the eye-catching nudist beach along the way, the very mad rush among hundreds(!) of other canoeists to make it to the endpoint in time for the last bus, and the eventual reward of a bottle of French champagne all made this an epic experience in our lives.  And I'm very glad I saved some documentation of it. 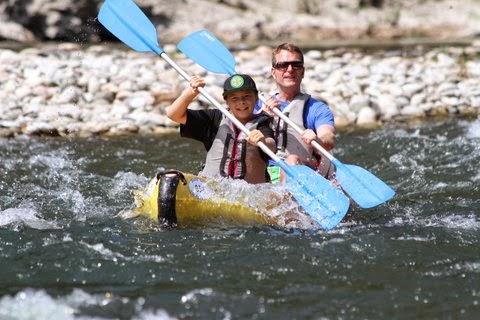 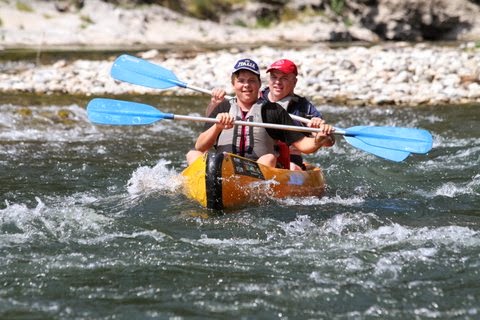 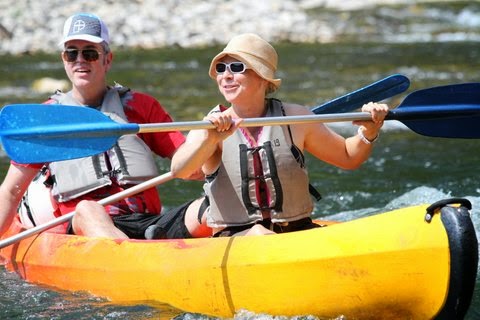