The day we moved to our neighborhood a year and a half ago, we were startled by an entourage of French gendarmes (armed police) racing down our new street outfitted dramatically in all black uniforms, complete with face masks.  (Apparently, there had been a big criminal case involving big names and big money taking place just down the street at courthouse hence the supposed need for special police uniforms.)  We discovered, along this same street, distinctively uniformed city workers who clean, clear garbage and make repairs, while unarmed city police, in their own, different uniforms, walk by frequently, enforcing the parking rules.  At the famous bakery on the main boulevard just a few streets over, the staff wear old-fashioned dresses with frilly aprons, while the waiters across the street at the brasseries are in traditional black waiters' garb.  Throughout town, the artfully wrapped scarf is an essential element of virtually any outfit for men and women alike.  And the wearing of sweats or workout clothes in public?  Well, that means you are working out only, and you might still get some strange looks.  It's best if these exercise outfits are somewhat coordinated, unwrinkled, and maybe accompanied by some jewelry or carefully fixed hair.  You can be a little more crazy at carnaval time, as shown below, but those elaborate costumes are also carefully put together and worn. 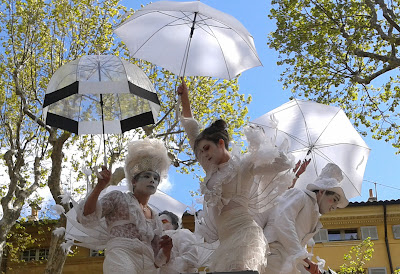 The French seem to adore uniforms and outfits and costumes.  They are certainly well-known for their sense of style and for the emphasis they put on outer appearance; one can think of the fashions inspired by the former French royalty and the many world-famous French fashion designers and their labels.  The French seem even able to make nudity look stylish, as on the topless Riviera beaches or in its public squares (the nude below was found in Nice).  Clever French sophisticates like Ines de la Fressange recognize the consumer appeal of this somewhat undefined French style and promise to tell us its secrets.  De la Fressange calls her variation of the style "Parisian chic" in her book of the same title, and her revelations include 'bye-bye bling' (wear nothing too obviously expensive) and 'explore' (mix and match new and old, luxury and casual).  Other secrets such as 'outfits are out' apparently do not apply to the south of France given the penchant here for a more coordinated or more studied 'matchy-matchy'  look, where shoes might match scarfs and nail polish and sunglass frames.  Even here though, one of de la Fressange's central points about French (or Parisian?) style does apply, and that is that all of the style and care put into what one is wearing must look effortless.  That must be what makes the French chic.  Meanwhile, the rest of us work hard to keep up appearances according to the French style.  An expatriate friend tells me that her previously more rumpled husband now irons his own shirt each morning for work and threatens to iron his son's shirts too for school, while my spouse's wardrobe has expanded markedly to include the floral prints and pastel colors more common in the south.  One son is no longer content with just the maillots (jerseys) of his beloved professional teams, but now must have the full tenue (outfit or uniform, or we call them kits in soccer), including the matching shorts and socks just like his teammates wear to practice.  And both sons say that they must have proper, stylish (and expensive) skate shoes, to go with their new skateboards. 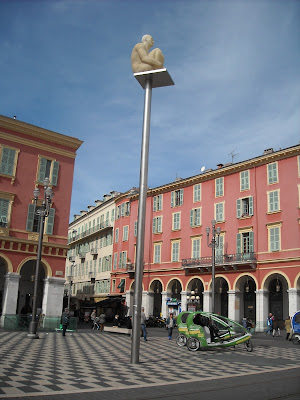 So, keeping up with French appearances does in fact take lots of effort.  The idea that 'effortless style' is even possible is actually quite amusing from a sociological perspective because we recognize that a great deal of deliberate impression management takes place in our daily social interactions, and that includes how we choose to dress ourselves.  Some of us may appear to make less effort and some efforts may be less conscious, but as sociologist Goffman argued, we all work to manage the impressions of ourselves that we present socially, as we slip in and out of social roles and move between front stages and back stages in that setting called the social world.  How we dress and present ourselves helps us and others know our social identities, maintain expectations, and recognize how we are supposed to behave in different situations.  Both the effortlessly chic French look and the what-do-I care grungy look more typical in our hometown of Seattle are not achieved without a great deal of effort and intent.  Even the effort to look effortless implies that we are trying to manage a certain image or impression of ourselves.  Whatever that desired impression is here in France--we might call it a certain cool detachment or a sophistication or je ne sais quoi, (an indescribable quality, often referring to the French)--the French are good at creating and maintaining it, and many of us non-French are eager to emulate it.
Posted by Anne Tuominen on Wednesday, April 10, 2013